You can find out more about the new record in the press release below.

Read a review of Dearly Beloved live in Ramsgate here.

Watch the video for new single Race To The Bottom HERE 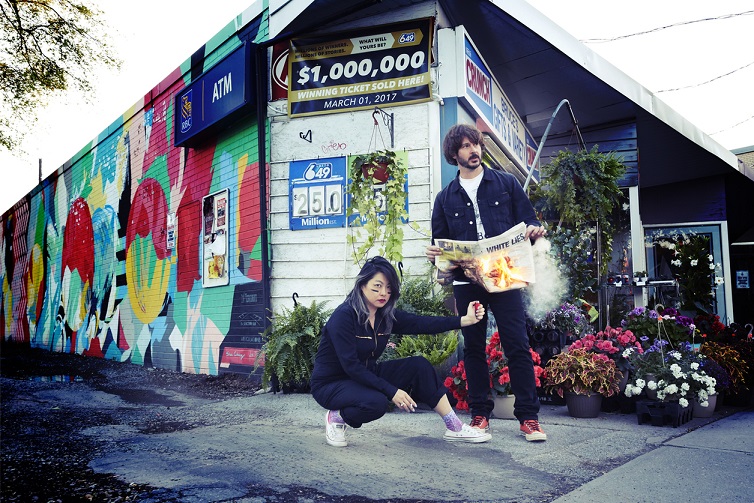 Dearly Beloved is the creative braintrust of vocalist/bassist Rob Higgins and vocalist/percussionist/Theremin abuser Niva Chow and the Toronto band will release Times Square Discount on October 25 via Aporia Records.

Today they share the video for album opener “Race To The Bottom”, an anthemic salute to the mom-and-pop shops and the families that run them. The track and video is inspired by Higgins and Chow’s shared experiences working in their first-generation immigrant grandparents’ small businesses as teenagers.

Higgins adds, “The song is a tribute to our grandmothers, who both ran convenience stores that Niva and I worked in as kids growing up. Their stories and achievements as immigrants to Canada that could barely speak English are even more incredible when you put them in the context of 2019.”

Watch the video below.

Times Square Discount is, as Higgins puts it, “a rabbit-hole record,” and one partially born of “binge-ing on Kubrick and drugs” and ruminating upon such fancies as “How do we make Kubrick an album?” and “How do you make an album version of The Shining?” in the van long enough for it to set in that the band’s thirst for weird and/or forbidden knowledge and collective capacity for conducting on-site empirical research could be put to far better use in each of the cities that it visits than simply binge-ing on Kubrick and drugs in a van.

The album was conceived on the road, as the band has already travelled hundreds of thousands of miles on the road in over 26 countries, but came together through an open journey. “If there was any grand design, it was just to take control of ourselves and just slow down,” says Higgins. “Like, the way Kubrick made films, man – they would have teams go out and do short research missions about shit, live places for months. Gather shit, learn shit. When you’re playing shows, you have all this time off, so it was, like, ‘Well, we could just get loaded all the time or we could research everything and go see it.’ We would be on tour in the Ukraine or in Arizona, going down every rabbit hole associated with said place and then researching the living shit out of it and taking notes, and those things became lyrics and the basis for songs.”

“They’re all kind of references to characters and people and conversations and things and moments and rabbit holes, so it’s got this very dystopian, almost WWII, Operation Paper Clip filter that we put on the whole fucking narrative that’s hard to get away from. But the more you make yourself aware of these days, the more disturbing it all is. So there’s a certain mania that comes with processing this much information. And now you’re being manipulated by it.”

Above and beyond this loose conceptual framework, however, came the liberty of recording here and there at Dave Grohl’s Studio 606, Rancho de la Luna or Dearly Beloved’s home studio on Phoebe Street in Toronto whenever the mood struck. And never for more than four days at a time.

“So we got to play, try different things,” adds Chow. “No producers, no fucking pressure. We’ve always done it on our own, but this time we had so many options and avenues to do stuff. So it was kinda fun to, y’know, step back and tour a lot and come back and kinda rejig.”

Ironically, the freedom of once again being left completely to its own devices has, on Times Square Discount, yielded some of the most pop-savvy material yet to appear in the Dearly Beloved canon. “Vacation” and “LSD” have an undeniably slinky, stick-in-your-head seductiveness about them, “Close Encounters” and “Dog Food Thumbs” a decidedly sing-song quality lurking amidst the battery.

Some of Dearly Beloved’s newly honed pop smarts might be traceable to Higgins’s recent gig toiling on and off again as a songwriter-for-hire in Los Angeles, a position that has drawn such friends and collaborators as Dimitri Coats of OFF! (who plays most of the guitar on Times Square Discount), James Di Salvio of Bran Van 3000, M83 conscript Jordan Lawlor and engineer-turned-keyboardist Tyler Beans into the DB fold alongside drummer Aaron Morrice on Times Square Discount. As Higgins notes, “there are, like, 18 guests on this record, people we met along the way.”

Including, on the diced-up electro-sprawl “Superhero” that concludes the second side of Times Square Discount’s deep dive into an increasingly elusive and experimental rabbit hole of its own, guest MC Maia, a five-person choir from Woodland Hills, James Di Salvio, and Lorca Cohen, daughter of Leonard Cohen.

“It’s kind of hard to get away from that, in a way, because I’ve spent two years in L.A. writing songs for other people. So it’s fuckin’ with my shit, there’s no question,” says Higgins. “I’ve never spent two years writing, in a different context, while making a Dearly Beloved record.”

Tentative dalliances with “evolution” and “maturity” aside, nothing’s about to change in the feet-on-ground, rubber-to-the-road sense of Dearly Beloved’s existence anytime soon. The band will continue to tour at a masochistic pace, vows Higgins, “because we have to, in some kind of fucked-up way.”

The band heads to Europe & the UK for a tour with Sebadoh this fall, with tour dates below and will be adding US dates in early 2020. 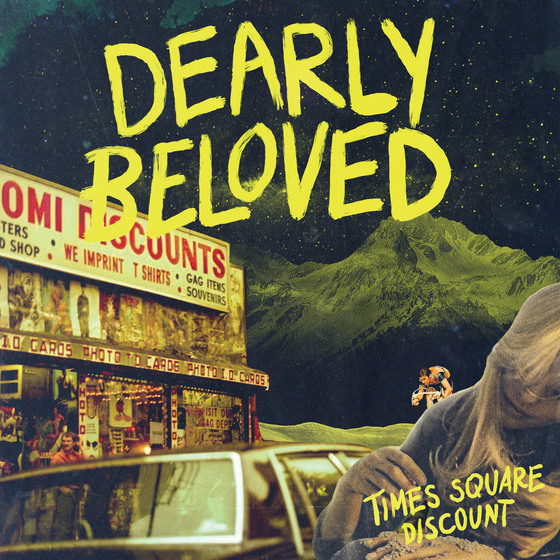