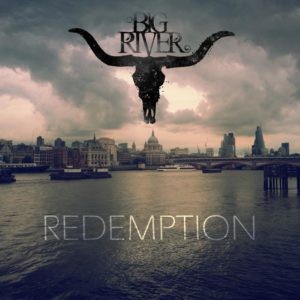 There are two ways the promotion of a debut album can be handled: the artist either hits their audience upfront with their best track – as Kate Bush had with ‘Wuthering Heights’ in ’78 and New Radicals did much later – or a few of the stronger tunes are held back to give the album a necessary lift when the time comes. In Big River’s case, the latter most definitely applies since neither of the best known tracks represent the band on full power. ‘Mama’, in particular’ is definitely the album’s weak link. A live version of the track was chosen as the band’s debut single back in 2016 and despite a great opening riff (clearly modelled on Jefferson Starship’s ‘Jane’ and then heavied up), it rarely raises above being solid pub rock fare. In the final album version, the crisp, ringing guitar of the intro has been buried under fuzz, which is a little disappointing. Moving into the bulk of the number, while the main guitar riff is more than solid in a metal-edged blues capacity and the drum part has a steadfast presence throughout, the song just isn’t that interesting. Vocalist Adam Bartholomew does his best wrapping a 70s soaked voice around a chorus that’s too reliant on an old “Mama always told me…” cliché, but it’s not enough to maintain four minutes. Released as a digital single a full year before the album, ‘Hometown Hustler’ manages to be an improvement thanks to a solid sound throughout, but still comes up short in the song writing department. From the outset, Fawsett hits hard with a huge riff – one that briefly sounds like it’ll become a much heavier variant of Jimmy Page’s ‘Liquid Mercury’ – but that quickly drops into a stomping groove that often seems as if it’s got nowhere to go. There’s a great wah-wahed solo, but it feels a little wasted on a number that sort of…lumbers where you’d hope it might swagger. Combine the leaden feel that with a tough guy lyric that’s not so great (Smith & Wessons are mentioned; there are threats of knocking out teeth; by the time Adam suggests he’s “gonna eat you for breakfast”, it becomes very much the kind of lyric that’ll divide opinion) and there’s very much a feeling that Big River are capable of better.

As for the rest of the album, luckily, there are better songs to be heard…and in a couple of cases, much better. ‘Dancing With The Devil’ takes a sidestep from Big River’s preferred 70s inspired sound for something hugely 80s. Its punchy riff isn’t a world away from a lot of that decade’s more AOR oriented hard rock; big harmony vocals round out a catchy chorus, while Adam’s lead vocals – still part bluesy, but far more of an old-school hard rock persuasion – are some of the album’s best, while the lead guitar break manages to inject a lot of fire into a surprisingly brief slot. It’s easily an album highlight – especially in terms of catchiness – and for lovers of albums like Graham Bonnet’s ‘Line Up’ and FM’s ‘Takin’ It To The Streets’, it’ll quickly become a favourite. For full on blues rock heftiness, ‘Devil’s Whiskey’ really doesn’t disappoint. Released as a digital single, it’s easily one of the tracks that shows the band at their absolute best. Following a huge bluesy howl, Big River settle into a timeless sounding groove, often sounding like Great White meeting with Rory Gallagher, which although of a very tried-and-tested mould, allows the band to flex some big muscles. Finding a gravelly tone, Bartholomew sounds confident – almost as if he’s channelled a performance from before he was born – while Damo fills plenty of the instrumental space with great and fiery tones. Also very impressive are the soulful backing vocals supplied by Lucie Hart; more than just a blues screamer of the Beth Hart school, Lucie’s mix of soul and passion very much rounds out an already great performance. Most good blues rock sticks to a formula and while this is no exception, it’s definitely an album highlight. For those who’ve never heard Big River before, this track makes an excellent first listen. For the album’s genuine highlight ‘You Are My Sun’, Big River slow down and lighten up. The clean guitar tones set against a warm bass never attempt to hide their love of early Free material and when approaching the quieter end of things, Bartholomew’s voice is actually greatly improved. After a couple of verses of 70s inflected balladry, the guitars rise up and with that, the vocal reaches for something more forceful. Unlike the heavier moments of ‘Hometown Hustler’, the band seem more than aware of their limits and use their obvious talents in a great way. Fawsett’s featured solo is at once prominent but tasteful; the rare use of counter-vocal gives the track a much bigger depth and the climax really shows off Big River’s melodic rock credentials.

While not quite on a par with ‘Redemption’s very best, ‘Blues Blood Baby’ adds a little more strength to the album as it contrasts a classic harmonica sound with a chunky rock groove that has plenty of weight. On this track, perhaps even more than before, Big River never appear shy in flaunting those huge70s influences. Damo’s guitar tone is dirty, very much in the same vein as a lot of 90s blues-rock revivalists and in lots of ways that’s the core of everything, but it’s bassist Ant Wellman who shines through as he adds complex four-stringed leads throughout. Although he’s not always out there front and centre, a few plays of this album uncovers the work of a fine musician, beavering constantly in the manner of Andy Fraser. Again, a few of the lyrics err on the side of being too obvious, but in this case, the music is definitely strong enough to see things through.

Tapping into more of a melodic rock influence, ‘Who Do You Want Me To Be’ occasionally sounds like one of Gary Moore’s deep album cuts from 1983, at least to begin with, and it’s good to hear Big River stretching out just a little. While it’s not flashy chorus-wise, the arrangement has a fair amount going for it, elevating Ant’s bass throughout. Featuring dual guitar work shared between Damo and guest Paul Martin, the contrast between the electric leads and acoustic parts lends a real depth to the recording. After various different shades of blues inflected rock, the gloves are off when the album bows out with a hard rock screamer ‘Blackened Rain’. With a much heavier approach to a riff and a very 80s guitar solo, what Big River lack in subtlety they make up for with balls…and while this is a world away from ‘You Are My Sun’, it pays a fine tribute to the Friday Rock Shows sounds that inspired the band in decades gone by. Adam sounds surprisingly comfortable when reaching for the louder end of his range – more so than on, say, ‘Hometown Hustler’ – and Damo seems to relish the opportunity to really attack his fretboard, even if that means the end result comes at the expense of his usually more measured style. Lovers of 80s melodic metal that sounds as if it should be followed by a Tommy Vance voiceover are definitely the ones who’ll get the most enjoyment out of these four minutes…and while it mightn’t be Big River’s finest effort, it sends ‘Redemption’ out with a bang.

‘Redemption’ isn’t perfect and it may be shamelessly old fashioned, but it’s an album with a lot to give, especially for keen readers of magazines like Mojo and Classic Rock. Anyone looking for a chunkier update on those rock favourites from hazy teenage years or perhaps a very British slant on a few harder edged blues rock moods could certainly do far worse than invest half an hour’s listening time.