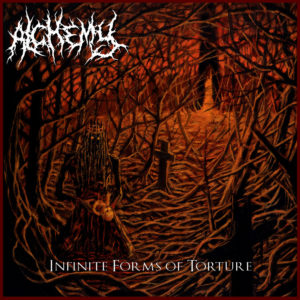 Alchemy formed in 2018 and quickly made their presence felt on the Aussie metal scene with regular live shows and a string of support slots. Their debut EP shares their love of traditional death metal sounds with the wider world, showing them to be more than capable of reviving the brutal sounds of Cannibal Corpse, Deicide and others with a genuine conviction.

‘Nocturnal Forest’ wisely marries extreme death metal traditions – relentless vocal grunts, pneumatic drums and a tiring rhythmic stance – and tempers them with a few points of other interest. Most of these come from the lead guitar work which often contrasts the deep, grumbling backdrops with a cleaner, piercing sound. For the bulk of the number, the lead guitars aren’t used so much for melody as extra textures; this really lends Alchemy’s extreme metal more of a progressive feel. However, approaching the middle of a terrifically forceful five minutes, guitarist Christopher Puglia drops in a surprisingly melodic solo, showing influence from various other metallic styles. As he reaches for longer, howling notes, the rest of the band fall in line and things gravitate from traditional death to more of a thrash metal sphere, something that gives a necessary balance as well as a further insight into how well these four guys can play. You shouldn’t get to thinking they’ve wimped out, mind, since their subsequent return into the darker corners of trad death seems even more intensive than before, with frontman Nic Webb pushing the deeper edge of his voice to absolute extremes. Tailing off with a few crushing riffs and a hauntingly gothic piano motif, this track shows almost all of the band’s skills in one brutal hit. As intense as it is, in lots of ways, it’s also the band’s most accessible track, so they were wise to release it as a download single ahead of the EP.

The remainder of the EP is often just as hard going – even more so at times – but the band’s musical skills and absolute commitment to the style are completely without question. After a count in on the snare drum, ‘Hadethema’ wastes no time in reaching for the extremes with another full compliment of pneumatic drums and lightning speed bass, but those with a keener ear will soon spot that this number takes a wide side-step in terms of its guitar layers. Beneath the death tropes, Christopher adds a counter melody that occasionally suggests more of a black metal influence in its cold approach. A brief instrumental break allows bassist Daniel Saeed enough space to throw out a few really fat notes that lean further towards a doomy sound, before a slower riff shows how well Alchemy handle classic thrash riffs. It isn’t too long before the death metal speeds and brutalities start to dominate again, but as before, Alchemy sound like a band who could truly take on the best when it comes to such things.

Taking the band’s skills and pushing them to the absolute limit, the title track is a genuinely brutal musical assault that somehow makes the EP’s other tracks somehow seem non-committal. Opening with an extreme pneumatic edge to the drums at first, the band set about playing a near impenetrable death metal rumble. This becomes even harder to take in once a deep growling vocal joins with the speed-driven noise. What’s instantly clear, though, is that their love of the death metal scene’s earlier bands and pioneers is very strong. The music comes with such an intensity that it feels as if you might not make it through the first minute. For the remainder, things rarely let up, especially with Christopher bolstering the pneumatics with a harsh lead guitar sound during various parts of the track. Between Nic’s absolutely devastating vocal choices and a bass sound so deep it completely blends in with the bass drums, Alchemy really push for extremes. However, even though almost everything here channels a very traditional death mood, there are a few glimmers of melody surrounding the guitar solo. Christian is so obviously keen to give Alchemy an extra dimension, though it’s never enough to reel in any fans of other more melodic styles of metal. If you’ve ever loved Deicide, Cannibal Corpse, Autopsy or Suffocation, though, Alchemy will almost certainly push all the right buttons.

Metal has mutated into different forms over the decades, but few subgenres remain as hard hitting and utterly uncompromising as death metal when played this close to absolutely straight. This is a fact that Alchemy truly understand. ‘Infinite Forms of Torture’ brazenly casts its net back to the formative years of death and in doing so really gives the genre’s fans something to savour. It’s often hard going, but the band’s musical skills and absolute commitment to the style are completely without question.