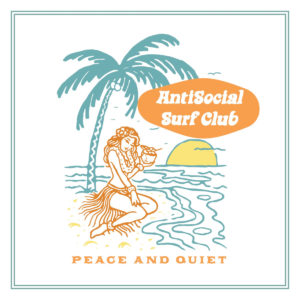 The lead track ‘Dancing Alone’ gets everything off to a fantastic start with a spiky pop workout that should instantly appeal to lovers of classic Fountains of Wayne. The way the rhythm guitars work their way in and out of a dancing bassline during the verse shows a love of 80s new wave as much as 90s power pop and there’s such an appeal in the melody that emerges quickly. That already makes this one of the band’s best tunes – no question – but the much warmer bass sound makes it seem far more complete than so much of the prior release. That’s a major plus in terms of a professional sound. There are already glimmers of something as catchy as hell by the end of the pre-chorus (frontman Matt Burt isn’t shy in adopting a vocal style that comes close to your poppiest of your pop punk heroes) but when the chorus finally kicks in, it hits with huge summery vibes. Add to that a harmony vocal, a few woo-hoos and an unashamed need to make people soak up good times…and it’s a genuine winner.

And if you think this Surf Club have peaked early, you’d be wrong. Very wrong. With ’25 & Sunny’ the EP takes an even bigger leap in both quality and all round catchiness. Taking the kind of rhythm beloved by Vampire Weekend and gluing that to the kind of indie pop that Fountains of Wayne delivered around the time of their ‘Welcome Interstate Managers’ album, the band’s quirky pop-rock/power pop truly comes of age. These three minutes are a tour de force of power pop with the vocals, bass and ringing guitar all vying for your constant attention. To compliment a busy verse, an assured chorus invites the kind of radio friendliness given to Good Charlotte’s best singles and an occasional synth adds a squirly quirkiness that suggests a love of The Cars. Stylistically, this might be the best thing you’ve heard since The Click Five issued their swansong – and it more than deserves to put this Canadian band on the map. Just brilliant.

The title track closes the EP with something that, at first, draws a bigger influence from very light pop punk, sounding like a cross between a less annoying New Found Glory and Good Charlotte. A lot of this comes from the filtered and slightly emo-ish vocal. Beyond that, the band’s love of power pop still comes through. On a very jagged arrangement, the use of space feels as important as anything, especially in the way the stop-start of the verses makes the chorus seem even bigger. Although it doesn’t ever have the all-round appeal of the other tracks, a few plays asserts a summery sing-along and there’s more than enough here to leave behind a fairly annoying earworm…in a good way, of course.

Three songs and out. It’s not enough…but at least these are three brilliant songs, The fusion of classic power pop styles combined with some great song writing and great playing leaves something deserving of a genuine cult status. Since this release is pretty much guaranteed to lift the spirits of power pop fans around the globe, you’d be an idiot to miss it.