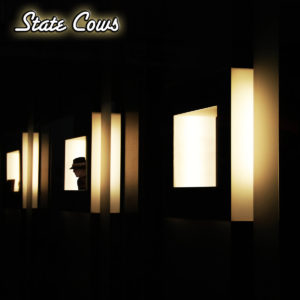 A year later, a few album leftovers were issued as a digital EP (‘The Second Seconds’) and it seemed State Cows had more to give. It would be a while until the band re-entered the studio, though, and even then, ‘Stealing The Show’ from 2017 was an obvious stop-gap release. A stop-gap it might be, but there’s an argument for “quality over quantity” since the EP more than occasionally hits the heights of the debut. Also, despite being comprised of only four tracks, seems rather satisfying and complete.

Obviously, those who’ve followed the band thus far will know what to expect, but that doesn’t make it bad. The perfectly crafted retro sounds are both uplifting and comforting. ‘Stuck On a Train’ – one of the best tracks within the Cows’ catalogue – wastes absolutely no time in transporting everyone through their magical time portal by beginning with a superb piano riff that’s straight off The Doobies 1978 masterpiece ‘Minute By Minute’ before ushering in a couple of Toto-ish guitar lines. So far, so…amazing. With the introduction of the drums, things settle into a straight-up westcoast homage, somewhere between a melody from the Toto debut and the Cows’ own ‘Stella By The Barlight. Shoehorning in a slight mood change for the chorus, there are nods to mid-70s Chicago and Marc Jordan’s ‘Mannequin’ album (an overlooked classic from ’78). Once State Cows have thrown all of these elements into their musical blender, an instant classic is assured…and even an unexpected spacey interlude doesn’t detract from the loveable grooves. With a smooth strutting quality, ‘Holly Mole’ recycles the best parts of Toto’s fourth album and bits of Jay Graydon without shame, but does a much smoother job than fellow Swedes State of Salazar when doing so. A showcase for a well structured bassline and chopping rhythm guitars from the outset, this recalls the State Cows debut with startling clarity, showing the band to be great musicians with an eye and ear on the past, but really becomes something special when reaching the instrumental break. Allowing the instrumentalists more room, the westcoast pop almost slides into a loungey jazz fusion with a sassy sax break and keyboard solo, akin to the softest parts of Weather Report jamming with Earth Wind and Fire.

Stretching to a near six and a half minutes, the title cut pushes the guitars forward in the mix, but never loses sight of the Fender Rhodes keys driving the soft funk melody. With a great vocal joining an equally strong arrangement, this hybrid of Maxus, Chicago and ‘Gaucho’ era Dan flaunts more of the past and makes a great showcase for shamelessly unfashionable keyboard solos…and it somehow seems all the better for it. Taught and lean, any urge for this to stretch into fusion territory is curtailed; the Cows know their choice of simple, harmony fuelled hook will stick. Although credited as a demo, the EP’s closer ‘Scofflaws’ sounds fairly formed…the only big difference being the bass parts are represented by squirly keyboard sounds. There are a lot of finished elements, too, and it’s a near guarantee that if you’re hooked on retro sounds, you’ll find something to love here. The harmony vocals are spot on; the funky guitar lines weave in and out of a jazzy piano…and by the time that piano steps up for a solo, it’s of the perfect jazz-pop variety.

‘Stealing The Show’ acts as a short and welcome reminder that when crafted with love, old sounding music never truly gets old. Although created over thirty years after their chosen musical niche reached its peak, for fans of west coast sounds, this EP has a timeless appeal and a sense of heart that all feel good music needs. If you’ve never heard State Cows before, check this out without delay and then go back to the debut – you won’t regret it. If you’re already a fan, you know you want this. Fashion be damned.