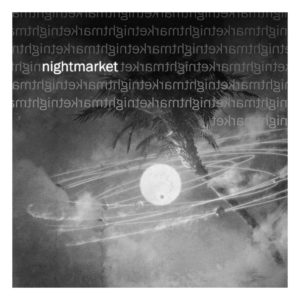 Comprising the talents of Evan Effres and Jon Swan, both of whom wield acoustic guitars and show a love of a simple vocal harmony, it’s impossible to hear Night Market and not be transported back into the world of the sadly missed Eric Lowen & Dan Navarro. Their second EP, 2019’s ‘White Seasons’ very much marks the duo as an act that deserve more attention, since its three songs are finely crafted, soft and often have a mood that gently lifts the spirits.

The title track works a solid acoustic guitar sound and some understated harmonies, creating something that all so often feels like a throwback to the 90s and bands like the aforementione Lowen & Navarro and the softer end of Toad The Wet Sprocket’s best work. What comes across so clearly – and pretty much instantly – is the duo’s gift for a melody; it’s all very easy on the ear, but with strong harmonies always in the foreground, it comes much closer to retro adult pop than basic easy listening fodder. In contrast with the 90s inspired acoustics, an electric lead fills plenty of space in the left speaker channel, occasionally hinting at older music by the likes of America and even The Allman Brothers Band. It’s never especially a number that’s big on chorus thrills, but it never needs to be; between the instantly familiar sounds and those deft harmonies, it’s an enjoyable listen.

Better still, ‘All Eyes’ opens with the contrast of dual guitars, where hard strums create a strong backline, while a ringing lead dances across a familiar rhythm. Soon enough, those harmony vocals return and straight away the voices sound like a visit from old friends. As before, it’s very easy to imagine Glen Phillips filling one of his solo albums with music that’s very similar – and this is obviously a good thing. Musically, this is actually stronger than the opening number in that the more dominant of the two voices sounds far more confident and the intricate lead guitar work rings and shimmers in a way that really impresses. A little more stripped back, ‘Rome Is Burning’ marries a thinner sounding voice with a tune that, too, sometimes has more of a musical fragility. At the thinnest end, you’ll hear occasional echoes of Monsters of Folk and Jim James; during the busier moments, it’s business as usual for Night Market with fine harmonies and a near unshakable rhythm. Creating a big climax for the song, a full on electric lead arrives in time for a heavily reverbed solo before Evan and Jon build a melody from a vocal that pulls the best from their quite different voices. You’ll find a much more obvious chorus here too, but Night Market never seem to want to draw attention to it in a heavy handed way. Much like everything else, it’s just there waiting to be discovered without any kind of fanfare.

‘White Seasons’ is lovely; it’s an easy listen without ever feeling too much like cheesy easy listening. Soft music without the muzak. In some ways, its three songs feel like a teaser for something more, but it’s should still be a very rewarding listen for lovers of acoustic sounds everywhere.