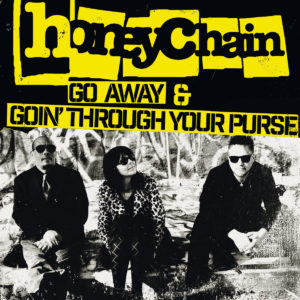 Honeychain released their debut LP in 2017.  Produced by Kim Shattuck, the record often drew parallels with The Muffs in that the bulk of the material straddled a fine line between hard edged power pop and melodic punk.   In some ways, the lesser known act showed themselves to be better than Shattuck’s own band in that Hillary Burton’s vocals were often much sharper.

A new full length is expected from the Los Angeles based punks before the end of 2019. In the meantime, the band have shared a single, ‘Go Away’.  If the single is a measure of things to come then the second Honeychain LP will be one of the best discs of the year.

‘Go Away’ is everything you’d want from melodic punk…and more.  The opening riffs are incredibly sharp and from there, Hillary’s vocals curl very naturally.  The track then leads into a great pre-chorus where the use of stops adds to the escalating tension, before the band unleash a pop-oriented chorus that confirms any early suspicions that you’re in the presence of a three minute banger.  Somewhere between late 70s punk, 90s pop punk and fierce power pop, it’s got it all.

On the flip, ‘Going Through The Purse’ is much rougher.  A slightly distorted guitar sound shows off some brilliant DIY origins, but despite being a fair bit faster and gutsier, the band’s love of a melodic edge soon shines through.  An old school lead guitar break shows the melody at the most direct, but once again, Hillary’s lead vocals often give the listener a lot to latch onto.  There’s almost a punk ‘n’ roll spirit at play, but it’s easy to imagine this appealing to lovers of the sadly missed Tilt.

Take a listen to ‘Go Away’ via the widget below.  If you like what you hear, the very limited 7″ can be purchased from Jarama 45RPM Records here.