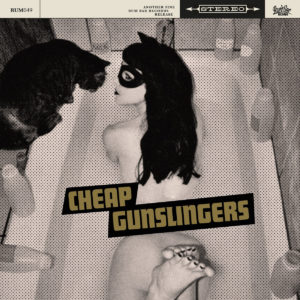 Their debut record zips along fantastically, cramming ten songs into barely half an hour. The way the majority of the songs never stretch much beyond two and a half minutes is one of its biggest strengths. The lean approach not only pays tribute to countless garage rock pioneers from the 60s; it also means that McGrady and his three piece band value a sheer drive over any temptation for indulgence.

When applied to tracks like ‘Detective’ and ‘Record Store’ – both of which throw out their three and four distorted chord arrangements with a genuine gutsiness – there’s more than a trace of the Gotohells at play, even if the outcomes are closer to garage sounds than any punk or punk ‘n’ roll. On ‘Detective’ in particular, the Gunslingers unleash a secret weapon in drummer Greg Kazek; his tom heavy approach and rock steady beats almost have a metronomic quality behind the trashier guitar sounds, which when contrasted a vocal that careens all over, results in a fantastic listen. Between a rigid rhythm and a carefree, “play it loud” sensibility, Cheap Gunslingers more than prove themselves as a band to keep an ear for. Taking that blueprint and tightening it even more ‘Three Chords’ again makes a great feature of the drums while delving deeper into a sound that owes more to Iggy Pop, especially in the vocal department. In and out in just two minutes nineteen, it’s a really ballsy garage rocker that, in so many ways, represents the perfect snapshot of the veteran McGrady’s place within a musical scene that could seem over-subscribed.

Deep into the heart of the record, ‘Junky Friends’ shifts the tone to fuzzier things as a repetitious riff comes across like a Mudhoney deep cut spliced with Rum Bar signings Indonesian Junk. A slower approach could’ve lent itself well to a much bigger chorus hook but the band had other plans, choosing instead to use distorted lead guitar howls throughout as a counter melody for a fairly repetitive riff, while ‘Off The Rails’ returns to the heavy drum sound to power a punk ‘n’ roll banger that cranks the distortion against another Iggy-ish vocal stance. By the time Edo throws out a lead guitar break loaded with off-key notes and howls of anger, the number really increases in intensity. By the relentless rawk of the second lead break that builds to a massive climax, there’s no doubt that this band have released one of the best garage rock discs of the year. Yes, it’s pretty sloppy in places, but that’s half the fun. That carefree sound doesn’t work quite as well when things slow down for the late 50s inspired rock ‘n’ roll balladry of ‘Bars of This Song’, though, as beyond a nice, dirty ringing guitar everything sounds a little too laboured. With Edo’s semi-drawled voice, this just results in something that feels as if it needs a little more pep. Still, nothing’s perfect and at least you couldn’t accuse the band of just sticking to the same sounds throughout this long-player…

Occasionally, Cheap Gunslingers show a gift for applying old Phil Spector girl group melodies to punk/garage edged riffs, placing them in the same ball park as Ramones when Johnny and Joey delighted in tales of burger joints and jukeboxes. This style is absolutely nailed on an album highlight ‘Good Time’ where the band take a meaty mid pace for a guitar riff and load that with harmony vocals and a suitably raucous lead break. The whole picture is one that straddles a fine line between trashy and charming. It very much perfects the kind of thing Indonesian Junk have teased with in the past, but in Edo, Cheap Gunslingers have that vital ingredient – a superior vocalist.

This debut doesn’t much care for intricate playing or any smart lyrical concerns; it’s the kind of record that just invites the listener to turn up the volume and be absorbed by its trashy r ‘n’ r thrills. Fans of the older Gotohells and Peawees will find plenty to love within this half an hour’s worth of hooks and riffs, as will admirers of the band’s sometime label-mates The Phantoms. It’s all a little rough and ready, but therein lies most of its appeal. If you’re big on garage rock sounds, a good time is pretty much guaranteed.