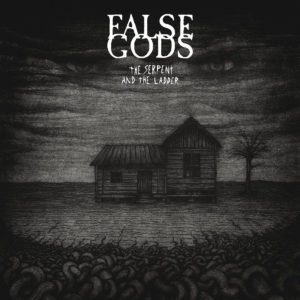 ‘The Serpent’ kicks off with a great drum part that’s heavy on the toms and almost sounds like the band are going to slide into an old Death Cult number or a cover of The Cure’s ‘Burn’ at any second. With the arrival of some very distorted and cold, clanging guitar notes, their intentions to draw the listener into an intense world of heaviness becomes clear. With those guitars marrying a sludge metal heaviness, a black metal coldness and almost a post-rock artiness, all the important bases are covered, while vocalist Mike Stack canes his throat on a vocal that sounds like an ugly mantra. Moving into an instrumental section, the drums cast aside their tribal brilliance and Paul Stack smashes the snare and cymbal in a funereal style before Mike returns with dire warnings about a world that will collapse and various multi-layered guitar lines from Greg March and Nick Luisi aggressively reinforce the post- and black metal influences. This manages to be stark and deep all at once, very much throwing all of False Gods’ idols and inspirations into a whirl of musical bleakness…but there’s even better to come.

‘The Ladder’ is easily the strongest of the two numbers. This is partly due to a much more trad approach to sludge during the intro (Sabbath played at twice the heaviness and half the speed is always great), but far more than that, the number shows off a brief interlude that has such a sparseness, it almost feels cinematic. Between these two extremes, the band resumes a natural state of pounding and grinding while Mike roars with intent, but the track goes from good to great during its drawn out climax. Here, a leaden pace and heavy riff is topped by cold and almost glistening lead guitar sounds, pushing the sludge farther towards epic black metal and even toying with some 80s goth rock. Between the (by now predictable) nods to Neurosis, keen eared listeners might even spot traces of Fields of The Nephilim and ‘Pornography’ era Cure, such is the bleak musical landscape that’s slowly been rolled out over these six and a half minutes. In terms of crossover styles, the music is truly excellent even if the throaty vocal style is almost certainly going to limit the appeal beyond lovers of extreme metal.

‘The Serpent And The Ladder’ is a little draining – in a good way, of course – but it’s also incredibly powerful. Given that this metallic sub-genre can seem a little one dimensional, it’s a real pleasure to experience a sludge band that are all too willing to approach their heaviness in a much less purist fashion. If you love distortion and intensity, aren’t put off by an aggressive vocal and are often happiest when swamped by a universe of slow, head nodding riffs, then this is certainly going to appeal.