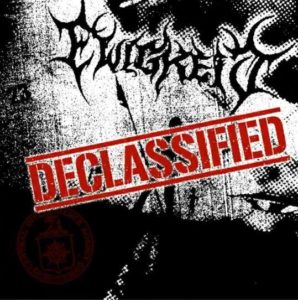 A companion to that album, this free EP showcases a couple of that record’s highlights alongside a dub remix and – of the greatest interest to most listeners – a pair of well known rock classics covered in Fogarty’s own distinctive style.

Of the self-written material, ‘Resonance’ is the most interesting track, since two very different styles of metal come together and wrestle for dominance. At the outset, Fogarty shows a love for a heavy rock riff in the classic mould. A riff that’s not a million miles away from something you’d discover on a middle period Dio album (circa ‘Angry Machines’) crossed with a classic In Flames density quickly catches the ear. The fact that such a melody conscious riff is then coupled with a multi-layered symphonic metal harmony just makes it even more interesting and – clearly realising how great it is – Fogarty reintroduces as the riff to back a strong chorus. Between those relatively old-school moments, the number delves deep into melodic black metal. The slower riffs have a doom laden intensiveness, but coupled with a neo-gothic lead guitar and a haunting ‘Tubular Bells’-ish keyboard part during the instrumental parts, there’s a lot of love for the extreme end of progressive metal on display. Vocally, it’s a little harsh, but given there’s such great music throughout, it still ranks as a near-perfect example of the style. ‘Disclosure’ works a heavy, head-bobber of a riff throughout, creating a strong backbone. Like ‘Resonance’, there’s a strong contrast between noise and melody, as various ambient synths contrast a hissing vocal anger during spiky verses, but as before, it’s the chorus where the magic happens. Using a multi-layered goth-inflected vocal, a few melodies befitting Paradise Lost and a fuzzy lead guitar that makes everything sound like Billy Corgan has come to jam, there are so many layers. It’s absolutely great listening…and more than proves that metal – extreme or otherwise – is far from becoming stale. If both of these tracks appeal, the rest of ‘DISclose’ is highly recommended. [A full stream is available here]

Looking at this EP’s extra material, the quality remains high. The dub remix of ‘Disclosure’ manages to latch onto the original track’s best elements, making a much bigger feature of the gothic vocals in the process. By mixing parts of the chugging riff with echoing drums, samples and a proggy keyboard, it doesn’t quite know whether it wants to be Type O Negative, Massive Attack retooled by Devin Townsend or a mash up between Gazpacho and My Dying Bride, but it’s actually fantastic – proof that sometimes less is more and that things don’t have to be mangled beyond recognition in the name of a remix (Melvins, we’re pointing a stern finger at your ‘Chicken Switch’… What in the name of sanity was that all about?)

For most, though, the two cover tunes will provide reason enough to download ‘Declassified’. Hawkwind’s evergreen compilation filler ‘Silver Machine’ is a great example of how covers should be reimagined to gain the most attention…and so, Ewigkeit take the once punchy, spaced out 70s headtrip and slow it to a doom metal chug. That might sound to some as if the life’s been taken from it, but that couldn’t be further from the truth. Between riffs on loan from Witch Mountain, a heavily treated vocal and a smidgeon of black metal lead guitar, this cover blends at least three extreme metal styles and still comes out sounding one hundred percent natural. It’s a genuine pleasure to experience something (over)familiar in a whole new light. Saxon’s ‘Lights In The Sky’ (another track that very much fits with Ewigkeit’s fascination with alien craft) gets a similar reinvention, and again, again yielding a really good result. Back in 1990, Biff and the boys approached the song in their usual high octane, denim and leather style which, obviously, resulted in the kind of sweaty heavy metal we all loved in the late 80s. Ewigkeit have decided the lyrics and melody would work even better if slowed to a sludgy, doom metal epic…and on the basis of this recording, it was a great idea. As with the best moments of the ‘DISclosure’ album, the general appeal is drawn from a fabulous goth-metal vocal – and here, that sounds better than ever – as well as some very atmospheric twin lead guitar work. Also, although it might only be a minute or so longer than Saxon’s orginal version, but it’s grandiosity and leaden pace makes it seem even longer…and if doom metal is your thing, then that’s all for the good.

Both an excellent primer for the unfamiliar and a great gift for the fan, ‘Declassified’ is a fantastic release. In terms of free downloads it’s very generous…and even it weren’t a freebie, the covers and dub track would still be worthy additions to the collection.

Grab your free download from Death To Music here.