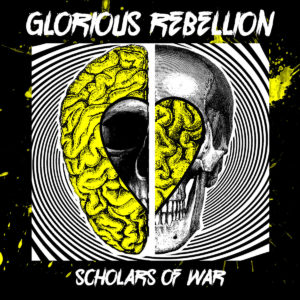 Five years into a career of pummelling audiences with riffs, Orlando’s Glorious Rebellion present a mini masterpiece with their 2019 EP ‘Scholars of War’. Its three tracks offer a world of glorious and sludgy wonderment that’s as quirky as it is genuinely heavy.

Lead track ‘Turn Around, Bright Eyes’ quickly raises a wry smile with a reference that instantly calls to mind an 80s evergreen hit from Bonnie Tyler and Jim Steinman, though any kind of musical pomposity or video clips of spinning ninjas really couldn’t be further from the band’s collective mind. Within seconds, they launch into something that sounds like the best thing you’ve heard from Helmet since the release of the ‘Betty’ album about a hundred years ago. The repetitive, sledgehammer riff not only feels like something derived from brilliant Helmet songs of yore, but guitarist Billy Myers also absolutely nails that Page Hamilton tone, giving everything a really distinctive sound; one that refuses to hide such a chief influence. Add to this a terrifically gruff vocal and a pounding rhythm section that’s a match for any within arty metal circles and things get off to an absolutely blazing start. The heaviness of the riffs actually takes so much priority, you might not find any instant lyrical hooks but, of course, the heaviness is the hook and by the time a near-perfect Helmet tribute descends into squalls of feedback with Myers repeatedly bellowing “I am the fucking problem” as a repeated refrain, there’s absolutely no doubt you’re in the presence of a band that truly means business.

‘This Is Fine’ opens with a dirty riff that occasionally brings hints of early Therapy? before breaking into the expected hardcore sounds of Helmet spliced with Stompbox. A hugely overdriven bass provides plenty of interest as it drives the fattest of grooves against jarring stabs of guitar piercing through the noise. All the while, a hugely intensive vocal adds fantastic metal-oriented anger, resulting in another grinding hardcore/metal crossover that’s just about as perfectly formed as you’ll find. Finally, Glorious Rebellion go all out with this set’s closer ‘Burn It Down, Lemon (Burn It Down)’, an uncompromising nine minute sludge metal ramble that just doesn’t mess about. A minute’s worth of dirty feedback finally gives way to a hardcore riff that’s delivered with the punk fuelled intensities of Shift before settling on a groove metal rhythm that works this trio hard. Even finding time for a shouty chorus, there’s a feeling that this track takes all of the previous traits and shakes them into something even more intense. By the time a world of howling banshee vocals adds a genuine contrast, things get better still and once bassist CJ takes over with one of the hugest four-stringed rumbles ever, this moves from “brilliantly intense” to “potential EP highlight” – a hardcore tour-de-force that’s really not to be missed.

If you’re one of those people who’ve always loved crushing riffs, ranging from early Machine Head to classic Helmet, to ‘Stoner Witch’ era Melvins and even Craw, then you’ll find this EP hugely entertaining. As far as sledgehammer metal sounds go, you’ll struggle to find them played with more conviction.