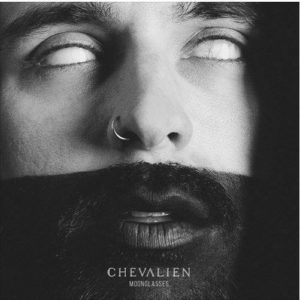 Almost instantly, his ‘Moonglasses’ EP sets itself up as a hard listen, as the intro for ‘Retaliate’ features an electronic sound masks an accented voice that sounds as if it’s chanting “kill, kill, kill”, before deep beats and some very heavy electronica settles into a repetitive and fairly tuneless grime edged noise. This is then topped off by a man rapping at speed with a heavy French accent. While the intensity of what Chavelien does can be very much commended, if approached from an “electro-metal” perspective (as he’s chosen to promote himself), there’s little to nothing in this opening number that’s even worth hearing more than once. In fact, even the first listen is a mighty slog. …And if you’re expecting any obvious guitar riffs or anything vaguely metal oriented, just forget it.

Much better, the title cut taps into a dense sound that is driven by speaker breaking bass and hard electronic handclaps, setting up something that evokes various 90s dance influences. It very much leads on from where ‘Retaliate’ left off, but an all-round better rhythm and opportunities taken to drop in different moods suggests there’s something that might just appeal to a different crowd. In the track’s second half, the heaviness subsides and the power comes instead from a spiky vocal and the kind of heavy electronica you’d find lurking somewhere beneath a ‘Union Black’ era Skindred track. While a chorus of any sort would’ve be helpful, this journey through heavy electronica dusted with hints of alt-rock presents the best in Chavalien’s mixed bag of frustrating noise.

Slowing down once more, ‘Black Speech’ takes on the air of an outtake from Massive Attack’s ‘Mezzanine’, but recycled into something far more intense. As before, Chevalien’s tendencies to rely on a world of rapped vocals that are bordering on impenetrable become very tiresome at at an alarming rate, but the insanely heavy, almost industrial beats just about hold a musical interest. By the time this track shifts from its main intent into a near-cinematic coda, it’s almost possible to imagine this was a Massive Attack classic applied to the chopped and screwed school of remixing, before being handed over to Rammstein. There are glimmers of interest, but to be honest, it isn’t as good as it should be…and it certainly isn’t as good as Chevalien thinks it is. Unfortunately, after a couple of tracks where the performer teases with ideas that might have a vague appeal, ‘Bleu Blanc Blood’ doesn’t even show any pretence of crossing boundaries – it’s little more than a confronting grime/rap workout that his accent makes harder to follow while a speedier approach to his intensive rhythms just pushes everything too far, while a remix of an older track ‘Sunderground’ sounds like an old Prodigy banger at first, but quickly turns heel into a tuneless drone. Rarely has five minutes felt so unnecessarily dragged out…

There’s possibly some potential here if you like rap and hard dance, but unfortunately, if you’re approaching Chevalien hoping for something with a fairly constant rock edge, you’ll be sorely disappointed. These tracks very much give a sense that he’s good at what he does, but beyond a couple of listens, it all turns into a semi-musical blur, and it’s all very samey – presumably, much Chevalien’s own grey view of the world around him. Approach with caution.