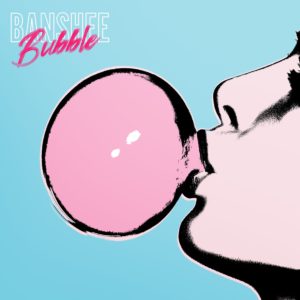 The title cut gives a great first impression for fans and first listeners alike, presenting a chunky but melodic slab of pop rock. The upfront bass that grumbles throughout gives the number a great bedrock from which the rest grows: from the chiming guitars and multi-layered sound, near mechanical beats and Erin Donnachie’s confident vocals, there’s something to enjoy at almost every turn from a very radio friendly track. Played loudly, it sounds even better – perhaps even the best thing, stylistically speaking, since Metric released their ‘Help I’m Alive’ single approximately a whole decade earlier. ‘You Said’ drops into something a little poppier, but its blend of choppy guitar lines battling with swirling keyboards still gives a great alt-rock/synth pop crossover. Kicking into a slightly heavier chorus, guitarist Gavin Williams gets to throw out a few noisier shapes bringing the music further in line with classic Paramore, but it’s the marriage of Erin’s bubblegum inflected vocal lines and the presence of some great keyboard loops that really makes the track.

While ‘Frenemies’ doesn’t really do much that you didn’t hear during the title track, a slightly more aggressive approach on the chorus gives the whole band chance enough to show of their rockier chops, while a lyric involving counting becomes as infectious as hell once you’ve heard it two or three times. Between the Metric meets Paramore meets Orchard Hill sounds, you won’t especially find anything new here, but there are a couple of musical aspects that really stand out. In particular, drummer Gianluca’s brief but energetic drumroll during an instrumental break and Erin’s overall vocal presence both go a long way to making this a much better number than first impressions might suggest. ‘Erased’ ends the EP with something similar in style, but also in a similarly high quality. On this final number, Banshee truly embrace their poppier instincts throughout a great verse which marries Erin’s slightly filtered vocal to a wonderful tinkly keyboard line, before bringing in the guitar for the chorus. Firmly channelling Paramore once more, the whole band sound terrific, but its on the mid-section with increased use of bass and a gently escalating tension that the best moments are heard. Launching back into a great chorus, these young Scottish musicians give their all one last time, closing the EP with a great hook that pretty much showcases everything that’s great about this release. For those who’ve enjoyed everything up until this point – or otherwise crave something between the hard end of pop-rock and the softer end of alt-rock – it’ll be a guaranteed crowd pleaser. While this bands chops are quite polished, their hooks are suitably massive…and it’s a great listen.

With this EP, Banshee really tighten up all of their previous musical ideas and present something that’s even more suited to the radio…and even one that reaches beyond a Planet Rock crowd. Yes, this is poppy, but at least three of the songs resemble perfectly crafted alt/pop that has just enough crunch to appeal to fans of commercial alt-rock. Capturing a feel-good sound throughout, this could be part of the soundtrack to part of your summer…