6 time BBC award-winning singer songwriter Karine Polwart releases her eighth album this coming August.   ‘Scottish Songbook’ does what it says on the tin, with Karine re-interpreting various pieces of Scottish pop spanning the last six decades.  Fans will experience her putting her own stamp on classics by Deacon Blue and The Waterboys, as well as revisiting Strawberry Switchblades huge 1985 hit ‘Since Yesterday’.

You can find out more in the press release below, which contains a link to the new single, a cover of Ivor Cutler’s ‘Women of The World’.

You can also listen to the recordings of ‘Dignity’ and ‘The Mother We Share’ (originally by Chvrches) via the embedded YouTube clips. 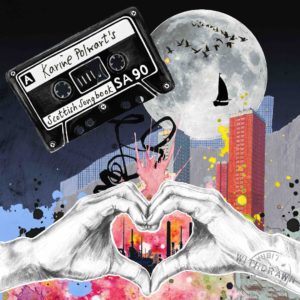 Karine Polwart today announces her forthcoming new album ‘Scottish Songbook’, due for release on August 2, 2019 through Hegri Music. The follow-up to her acclaimed 2018 album ‘Laws Of Motion’ – which drew standout reviews, including Mojo Folk Album Of The Year – the new project captures multi-award winning songwriter and musician, theatre maker and published writer Polwart reimagining a clutch of tracks which span over sixty years of Scottish pop. Spawned from Karine’s much-praised 2018 Edinburgh International Festival live show of the same name, ‘Scottish Songbook’ draws together her interpretations of classic tracks by the likes of John Martyn, Chvrches, Strawberry Switchblade and Biffy Clyro. The album details arrive today alongside the latest single from the album, Polwart’s version of ‘Women Of The World’ by Ivor Cutler – listen here. Karine – a six-time winner at the BBC Radio 2 Folk Awards, including 2018 Folk Singer of The Year – will launch the album alongside a performance at this year’s Cambridge Folk Festival on August 2, 2019, ahead of a UK headline tour including London’s Barbican on November 27, 2019 (on sale March 15).

Recorded at Chem 19 (where the likes of Franz Ferdinand, King Creosote and Teenage Fanclub have all cut albums), Polwart’s ‘Scottish Songbook’ features regular band mates Steven Polwart and Inge Thomson, alongside Graeme Smillie (bass and keys), Calum McIntyre (kit and percussion) and Louis Abbott of Admiral Fallow (vocals, guitar & percussion). The sextet’s hymnal interpretation of cult Scottish singer Cutler’s ‘Women Of The World’ arrives alongside the first of a series of blogs Karine will be publishing via Medium throughout the month, inspired by trailblazing Scottish women. The first – published today just ahead of International Women’s Day (March 8, 2019) – is Polwart’s tribute to Mary Brooksbank. You can read Part 1here and Part 2 here. A much-revered political activist and songwriter, Brooksbank is the only woman to have her words inscribed alongside the likes of Robert Burns and Edwin Morgan – on the Writer’s Wall at the Scottish Parliament. Polwart first came across Brooksbank’s legacy in the late nineties when – seeking an outlet from the pressures of her work at Scottish Women’s Aid safeguarding the victims of domestic abuse – she attended an evening class called ‘Women and Folksong’.

Speaking about the interplay between Cutler’s simple, resonant lyrics to ‘Women Of The World’ and Brooksbank’s struggles for women’s rights, Polwart says; “The social and health care jobs most of us inhabited were precisely those that Mary fought for, at a time when infant mortality in Scotland’s industrial towns and cities was close to 20%, and the NHS and the Welfare State were but a dream. The act of singing in community with others in that draughty old school was physically, emotionally and politically restorative for all of us. For me, it is still. Indeed, it’s why I sing.”

Karine has collaborated with Scottish visual artist Jen Frankwell to create a series of multi-layered artworks to accompany ‘Scottish Songbook’. Created using a miscellany of items including postcards, pin badges, statistical data and textile remnants, Frankwell’s thoughtful montages cut to the heart of the issues surrounding community, dignity, purpose, mental health and hope that Polwart’s body of work continues to shine a light on.

Praise for ‘Laws of Motion’

“Folk album of the Year” MOJO
“Considered, compassionate and intricate, works a slow but deep enchantment”. Uncut 8/10
“Epic, assured and spine-tingling. Polwart’s inventiveness is unfettered, but the result is not only musically and instrumentally rich, but uncommonly focused. Music for our times. the Quietus
“Dazzlingly inventive” Songlines ✭✭✭✭✭
“An ambitious, rich and rewarding record that sets out to encompass the globe” Metro ✭✭✭✭
“There are few songwriters sharper” Financial Times ✭✭✭✭
“A flawless outing” The Observer ✭✭✭✭
“It’s time Karine Polwart was truly acknowledged as a national treasure” fRoots