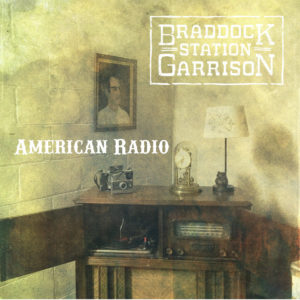 Mixing 90s power pop with a touch of Americana and the kind of rock ‘n’ roll swagger you’d find from Boston’s Tom Baker & The Snakes, Braddock Station Garrison have a great crossover sound. Their fourth album, 2019’s ‘American Radio’ takes a well-established style, but thanks to some solid musicianship and a few fantastic chorus hooks, its ten songs sound anything but stale.

The album’s lead track – and single – ‘Blockbuster’ is a near-perfect example of the band’s favoured approach to song craft. The guitars are cranked, but thanks to a solid mid-pace they still keep a vague sense of Americana themed melodic charm, while a heavily accented voice gives a much bigger punch to those Americana vibes. The initial feeling is one of hearing a deep cut from Buffalo Tom with Barenaked Ladies’ Steven Page on vocals, but a few plays uncovers the work of a band with more than enough of their own charm and talents to see everything through. Between the simple but catchy hook, a solid drum groove and heavy jangle, it’s a really great opener.

Taking a faster pace, both ‘Small Town Scene’ and ‘Jailhouse Doors’ push forth Steve Shillinger’s loud rhythm guitar work and find the rest of the band falling into a solid 90s pop-rock groove. ‘Small Town Scene’, in particular, reinforces that initial feeling that BSG are a band who value a big hook and here, they give the album an instant stand out with a track that at first hints at very early R.E.M., but soon enough becomes a dead ringer for The Connells. ‘Jailhouse’ brings some very similar vibes and despite the occasional vocal wobble, it’s a number that captures a the four piece band in full flow, with Mike Pinkerton underscoring their beloved jangle with some tough but melodic bass runs. Neither song will give listeners anything especially new, but for fans of the style, there’s a lot to enjoy.

Following a really live sounding drum fill, ‘When You Say’ has an even rockier feel, constantly driven by Jed Prentice behind the kit. Jed also adds a few off-centre counter-vocals to a quirky verse, quickly suggesting another great track is about to unfold. Unfortunately, a slightly flatter lead vocal makes this far more of an acquired taste, but more great bass work and a brief and bluesy lead guitar break gives everything just enough of a lift. While it’s almost certainly the album’s weakest track, there’s enough of a good idea here to just about see it through, while the moodier title cut presents a great musical unity as the slow and spacious riffs allow the bass to dance through the cracks. Echoes of Rob Rule and Stir are very welcome influences (even if never intentional); a bluesy lead guitar break provides a real highlight and with Shillinger’s voice adopting more of a drawl, he sounds more like Steven Page than ever. One listen should be enough to work out why the album was named after this track… In terms of retro rock, it’s great – easily the best of these sessions. It’s possibly even the best track from Braddock Station Garrison’s entire recorded output to date.

The heavy jangle at the heart of ‘John Lennon In California’ adds more of that Buffalo Tom edge, which is very welcome. With the guitars turned up a couple of notches, the track comes with slightly more of a live in the studio feel which really benefits the drums throughout, and especially so when moving into the second half of the arrangement. With a great sense of bluster, an Americana fuelled guitar solo and, finally, a quieter last verse adding a huge contrast to everything that’s gone before, it’s a rigid – if predictable – take on a comfortable style for the band. Lennon, meanwhile, seems somewhat of a red herring, adding weight to a story-telling mystique and while more of a chorus would’ve been nice, for lovers of 90s jangle there’s enough here to entertain. For those hoping for a bit less Americana/indie jangle and more of a fat swagger, then ‘Travellin’ Bible Salesman’ should more than hit the mark with a Watts-ish riff, semi-sloppy solo and the whole band tapping into some tough bar-room vibes. Shillinger takes his voice up a notch and a more nasal performance is perfectly suited to the trashier qualities of the track. If not for guitar tone, this could almost pass as a different band, yet at the same time, the change in mood gives ‘American Radio’ a much needed feeling of variety. It might not be high art, but it’s another stand-out tune within these largely enjoyable forty minutes.

If you ever liked bands like Rob Rule or Thermadore back in the 90s, then Braddock Station Garrison deserve to be somewhere on your musical radar. There are a few iffy vocals, but with echoes of Hootie, of BoDeans and Dillon Fence throughout, everything comes from a great musical stock. If any of those bands, along with Buffalo Tom and The Connells – and especially The Connells – still appeal to you, then this disc is required listening.