The band then quickly set to work on writing more songs for a follow-up.  With a fast work ethic and songs honed while on the road, their new album ‘Get Lost’ is set for release early this year.

“We’re looking at a release in the late Spring on Outloud Records“, explains frontman Zac. “The plan is to have the new one out right as we leave for tour in mid April. Provided there are no post-production issues, ‘Get Lost’ will be available for purchase on April 11…  That’s right: “purchase” – I hate it when people say a record is about to drop. Is that what we’re all supposed to say now, though? Is it “dropping” on or around April 11? Is that what the kids say? All I really know is that I’m expecting at least a seventeenth of a cent in Spotify royalties the day it comes out!”

He’s approaching the record’s release with a typical “can-do” attitude, adding that “a vinyl edition will be a little later via a different label.”

For fans of ‘Get Fired!’, ‘Get Lost’ is going to be a welcome follow up, but Zac suggests it is far from a carbon copy of the previous record:   “We’ve pulled in a lot of 50’s rock influences. Jenny [bass/vocals] and I have a dog named Buddy Holly and [the Buzzkills’ drummer] Bass Amp hosts his own 50’s Rock radio show on an FM station here in St.Louis, so I think it those influences naturally started finding themselves in everyone.  We’ve spent a ton of time on building back up melodies and harmonies, I think it will stand out.”

And, indeed, early indications are that ‘Get Lost’ will be a side-step from the previous record.  One of the key tracks, ‘She Hails Satan’ mixes classic pop punk with the kind of Frankie Valli and soda bar influences beloved by the Ramones, but hits the listener with a harmony filled chorus where Jenny’s vocals really give the Buzzkills a different dimension to their earlier recordings.  In contrast, ‘Tattletale’ is far closer to a Screeching Weasel homage than the band have recorded previously, right down to its sneering lyric.

“Even with the melodies, a lot of the new songs are a little more raw. I think our fans will get it.  ‘Get Fired!’ was a really polished record. We wanted the follow up to represent more of our fast and fun side!”

As the Buzzkills’ guitarist Gene puts it, “This about looking for love in all the wrong places, finding it and having it end in disaster.”

‘Get Lost’ is released via Outloud Records in the Spring.

The Radio Buzzkills are on tour throughout April ’19 — 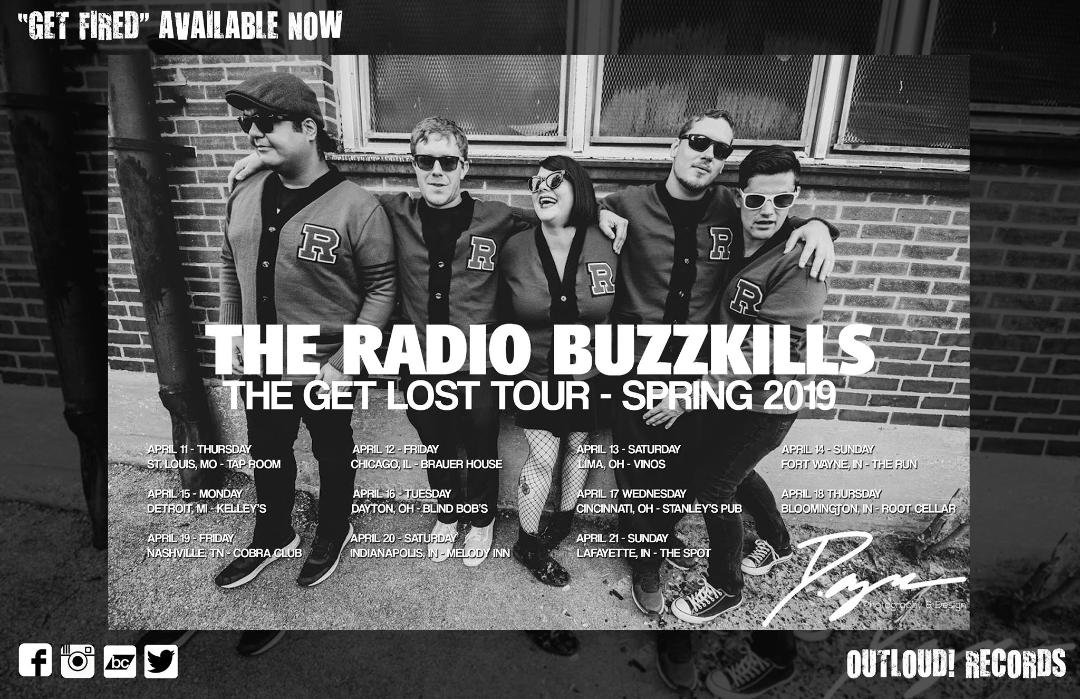