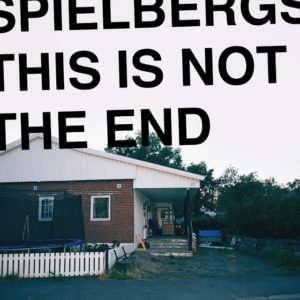 The opener ‘Five On It’ quickly delves into Spielberg’s 90s obsessions with a fuzzy, hard indie workout that uses rhythmic chords to its best advantage. Sounding like a harder version of Yo La Tengo, it sounds even better during the moments where small walls of feedback are build around the main musical hook and with it all being wrapped within a spritely two and a half minutes, not a second feels wasted. Cranking up the intensity, ‘NFL’ introduces heavy bass work and a drum kit smashed into oblivion as a repetitive riff whips the band into a distorted frenzy. A number that’s always concerned with moods and layers over the idea of an actual chorus, there’s a huge homage to Sonic Youth being played out, but with a semi-bluesy lead guitar bravely cutting through the noise on occasion, Spielberg’s definitely put a new slant on a familiar sound. With the track’s coda dealing with moments of quiet before diving into a repetitive refrain – definitely providing a delayed hook of sorts – there’s a huge tonal shift, but what emerges is just as appealing. And as Thurston Moore obsessed layers of guitars pull everything to a close, it very much provides an early highlight for what’s already shaping up to be a terrific album.

Another standout, ‘4AM’ flaunts with a slight Joy Division influence before settling into a huge indie rocker full of overdriven guitars. While it never strays from some of Spielbergs’ most typical fare, it very much improves on everything that’s gone before. There are two reasons for it being not just the album’s best track but also the band’s greatest achievement at the time of release: firstly, they show a gift for building to a climax with ease, but more importantly, they’ve counterbalanced the distortion and huge sounds with a really infectious chorus. In the hands of others, the hook could easily be applied to power pop – there’s a friendly feel that could even be the work of Gigolo Aunts. Hooks, riffs and just a smattering of noise delivered with a boundless confidence: this is just wonderful…

Elsewhere, ‘Forevermore’ and ‘You All Look Like Giants’ both tap into fuzzy, guitar-heavy workouts that very much compliment ‘We Are All Going To Die’, suggesting instant appeal for those who’ve heard the EP and with the latter cranking the bass, Spielbergs sound tougher than ever before, while a couple of other tunes stretch into more unfamiliar territory. ‘Bad Friend’ isn’t so much concerned with fuzzy 90s throwbacks as teasing with a melodic edge that’s closer to emo and pop punk than the usual Spielbergs fare. The genuine punch of the drums colliding with a tough riff starts everything well enough, but the inclusion of a big chorus means it’s actually also one of the album’s biggest earworms. Something that sounds like a dirtier version of Jimmy Eat World probably wasn’t to be expected, but it isn’t the album’s biggest musical detour… ‘McDonald’s (Please Don’t Fuck Up My Order’ is especially disarming given that the penchant for fuzz is all but discarded. Instead, several minutes are played out, exploring more of an ambient style – a touch of goth; a whole world of quieter post-rock – but in experimenting in such a way, Spielbergs show they’re far more than retro one-trick ponies. They’ve got at least three fantastic tricks at their disposal…and it seems they’re equally talented when it comes to perfecting them all.

Fans of the EP will be delighted with ‘This Is Not The End’. Memories of NME cassettes, ‘Indie Top 20’ and MTV’s much missed ‘120 Minutes’ are the heart of the Spielbergs’ new/old vision, but their recycling is so loaded with love and big riffs, it’s a record that lovers of fuzzy indie and light shoegaze sounds just can’t afford to miss. A potential classic in almost every respect.