First announced back in October 2018, the MPF (Manchester Punk Festival) is set to take place over the three days of Easter Weekend 2019. Among the first wave of bands confirmed were festival favourites King Prawn and Sonic Boom Six.

Several dozen bands were confirmed over the coming months including Samiam, Subhumans, Call Me Malcolm, Goober Patrol and up and coming ska band Millie Manders & The Shutup.

The final wave of bands – now totalling in excess of a hundred – has now been confirmed, adding the mighty Snuff to the line-up. A very welcome addition, Snuff are one of the funniest bands you’ll ever see. If somehow you’re going to this event and haven’t ever seen them, you owe it to yourself to right that wrong.

More details, plus a link to the website, can be found in the press release below. 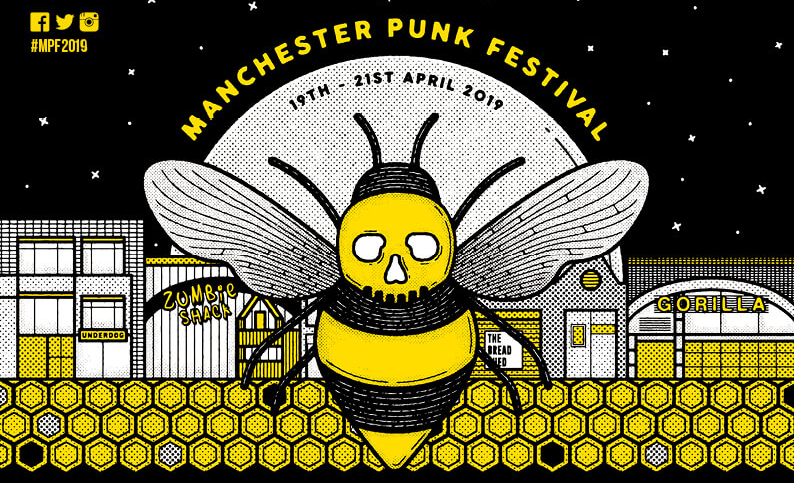 Manchester Punk Festival have just announced the final wave of bands to play at the festival across Easter weekend in April 2019. It’s a multi venue city centre event moving in to it’s 5th year and they have arranged for over 130 bands to grace the stages.

The latest announcement includes UK punk rock legends SNUFF, the much revered US skate punkers 88 FINGERS LOUIE and the one of the UK’s current bright lights MARTHA. Along with that they are welcoming German crust powerhouses ANCST over from Berlin, reggae punk rockers AUTHORITY ZERO and Bird Attack Records favourites SUCH GOLD over from the states. There will be reunion sets from OFFICER DOWN and CALVINBALL, an acoustic appearance from Leatherface front man FRANKIE STUBBS, Cornish hardcore outfit F. EMASUCLATA and a very special after party set from SONIC BOOM SIX in tribute to the late Tim Gray of Big Tone Recording Studio.

All tiers of early bird ticket sold out in minutes and the event is expected to reach capacity as in previous years. This edition sees added space and even more bands than before to go along with their vegan street food, punk cinema, comedy / poetry stages and a plethora of punks from all across the globe. It has an incredible atmosphere and welcomes anyone who wants to enjoy the best live music around.

Head to the MPF website to buy tickets: https://manchesterpunkfestival.co.uk