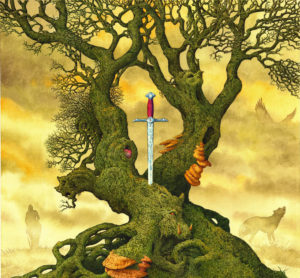 Metal has gone through various different fashions over the decades. No longer just typified by the big vocals and studs ‘n’ leather of the New Wave of British Heavy Metal, it has taken in different influences and spawned several subgenres, with each giving a very different listening experience. Very little of this seems to have been noticed by Canada’s Gatekeeper, whose debut album ‘East of Sun’ relied heavily on some very 80s riffs and the lyrical themes of an old Helloween LP.

Offering a couple of new recordings alongside an acoustic re-working of an old favourite and an obscure cover tune, their 2019 EP ‘Grey Maiden’ is similarly rooted within the 80s and although incredibly old fashioned in style, this four tracker is actually great at what it does. For those whom enjoyed the previous LP, it’ll be a more than welcome stop-gap.

You can almost smell the leather the minute the title track rips from the speakers at full force, with an influence somewhere between ‘Screaming For Vengeance’ era Judas Priest and classic Iron Maiden. This previously unheard number is perhaps the pinnacle of retro metal from an independent band. While the drums are heavy, that 80s vibe mainly comes from rhythm guitarist Kenny Kroecher who attacks his instrument in a brilliant proto-thrash style while vocalist Jean-Pierre Abboud tackles each line at full pelt channelling the great metal vocalists of yore, but especially the forceful approach of Michael Kiske. He’s got a strong, if not distinctive voice, but it’s the music that really lends the most appeal. With Kroecher and second guitarist Geoff Blackwell delving into all manner of twin lead sounds – always a plus point when it comes to retro metal – and an absolutely cracking extended solo that could happily sit alongside classic works by KK Downing and Saxon‘s Paul Quinn and Doug Scarratt, everything sounds great for the style Sure, the lyrics are a bit…silly, but in terms of epic, fantasy themed metal, it’s all brilliantly put together. The EP’s other new tune, ‘Tale of Twins’ is much heavier, preferring to lay on a deep chugger of a riff drawing more influence from the slower elements of 80s thrash. It’s perhaps a touch heavier in places, but the usage of twin lead guitars more than suggests Gatekeeper could return to those even older influences at any second. Moving into a driving verse, it’s possible to hear nods to Judas Priest – ‘Hell Patrol’, specifically – as a great tune slowly unfolds. The featured solos are superb and Abboud’s vocal, lower than before, carries a genuine sense of presence. It’s the work of a man who’s completely comfortable with his chosen style, never pushing too far and always knowing his limits, while the tales of battle and valour accentuate the pomposity. It’s cheesy as hell, but if you’re in the mood for old-school metal, it is also thoroughly enjoyable. Fashion is sometimes overrated.

Resurrected from an old Gatekeeper demo tape and then recorded acoustically, ‘Moss’ is a pleasing detour into folk metal and medieval themes. Dual guitars rattle through a melodic, finger picked tune showing off the finesse of the players, while the addition of a few strings and drones accentuates the folky feel. Often suggesting like a prelude for something bigger, this Euro sounding sojourn into something lighter is well played, but perhaps a smoother vocal would have helped improve the recording. Without the huge sounds to absorb parts of his performance, Abboud sounds, perhaps, a bit too uneven and scratchy for the job in hand. The music is enough to ensure it’s worth hearing if you’re keen on the style, but the tune deserved a slightly better send off. Digging through their record collections, Gatekeeper have also sourced a really obscure cover to finish things off with a real blast: ‘Richard III’, originally by Tredegar, is the perfect fit for these Canadians. Naturally, they’ve chosen not to tinker with the arrangement – the clean guitar opening is perfect for Blackwell already – but moving into the main body of the song, the recording here shows off a beefier sound than Tredegar’s 1986 recording. The jagged battle metal riffs are tough and tight and with the bass pushed to the fore in a few places, it almost rivals the title track for showing what these guys can do in full flow. If there’s any lasting impression, though, it’s the extensive twin lead work; while Gatekeeper have only borrowed this tune, the guitar work is terrific, featuring some of the best metal twin leads since Maiden released ‘Powerslave’ back in ’85. …And with a hefty chug to finish everything off, if you like pure 80s metal, there’s every chance this cover could be a favourite.

The production isn’t as sharp as it could be – the DIY origins of this recording are a little too obvious in a couple of places – and the material is shamelessly old fashioned, but there’s something about the mood and enthusiasm within the performances that just seems to work. If you have a hankering for something retro, full of big riffs and with more than a smidgeon of Helloween and early 80s Priest driving those musical cogs, you’ll find this band and EP have a lot to offer.