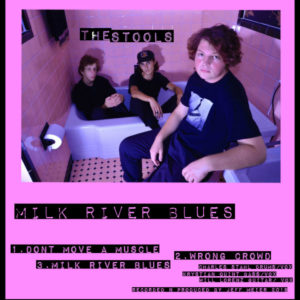 Detroit three piece The Stools take the guts of garage rock and pull at them until some of the uglier elements of the genre are the dominant force. Despite its title and despite their location, you shouldn’t expect their 2018 cassette ‘Milk River Blues’ to be overly concerned with drawing from bluesy elements; nor should you approach them thinking that either the legacies of MC5 or The Stooges strongly apply. The Stools are slightly unhinged and are probably best approached with caution.

This release is brief, but still manages to create a stark impression of their chief musical interests within three pieces of music that aren’t so much songs as sharp, stark bursts of anger. ‘Don’t Move Muscle’ uses a heavy, repetitive riff that falls somewhere between garage rock and stoner noise, chugging relentlessly. Its simplicity is striking in that it’s more minimalist than most other riffs of its kind, while the drums pound in a similarly no-frills manner. Combined with a shouty vocal that’s just about loud enough for you to hear the vocal chords being damaged, this is garage rock at its most primal. Granted, you’ll find faster and more exciting riffs and garage-based jams out there – not least of all from The Stools’ label mates The Wirms – but in terms of making a first impression, a general ugliness hits quite hard. Stretching into more of a 50s sound and channelling a Cramps-ish riff cranked through a wall of distortion, the title track is more accessible. A familiar sounding riff goes a long way to making the track stand – coming across like an old Duane Eddy affair played through broken speakers – but also the frenzied vocals are far more in line with the music. Making Jack White sound like a lightweight, this is a taut workout that values fuzz over fuss and is all the better for it.

The genuine stand out, though, is ‘Wrong Crowd’. Presenting a dual layered fuzz guitar and handclaps in a way that pays tribute to garage rock’s more formative years, The Stools certainly accentuate the 60s-ish feel. However, don’t get to thinking The Stools are merely happy with settling into an old and straight sound; the vocal here, partly drawled and yelped, is far better than on the opener, yet still bonkers enough to ward off all but the most patient (or twisted). Musically, though, the chopping riffs and a howling guitar solo of a genuine garage rock variety outshine everything, making this a ninety six second belter.

Whilst this EP sometimes shows a great rawness and the ability to create a buzz with rough ‘n’ ready riffery – much like UK indie rockers The Jacques before them – the vocals here are somewhat problematic. The first time you hear this EP, you might find an urge to think “what the bloody hell is that?” and then quickly move on, such are the howls combating the more enjoyable musical element. If that’s the case, make sure you return to give this a second go. It doesn’t necessarily get less ugly, but it somehow makes more sense.