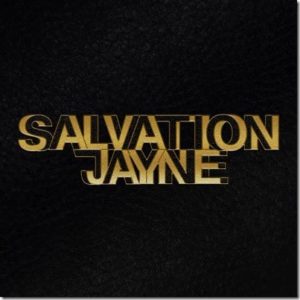 Their 2018 EP – a self-titled affair – is touted as a “new beginning”…and it takes about thirty seconds to work out why. Following a fuzzy, feedback tinged intro, ‘Cortez’ wades in with some hefty size nines. The one-time fairly traditional, late 80s hard rock riffs have been replaced with something dirtier. Armed with a heavily distorted sound that owes more to Royal Blood than any of their prior influences, Salvation Jayne sound much weightier than before…and it’s great. The guitars truly crunch; the bass drives a massive fuzzy bottom end. In fact, pretty much the only link to their past is Smith’s vocal style which retains a melodic curl which appears to be hugely malleable, sounding as forceful – but more importantly, as comfortable – as before. A huge chorus is on hand to compliment the huge riff and all things considered, it’s a great track, but one that’ll perhaps not necessarily sit well with older fans. It isn’t as an extreme a shift as when Crowsaw threw in the towel on their sub-Hendrix blues rock and re-invented themselves as a full scale prog metal band, but it’s still a huge change.

Backed with a huge bass drum and a melodic, mechanical style, ‘Juno’ starts out not unlike a heavier version of something from Yeah Yeah Yeah’s ‘It’s Blitz’ album. Obviously, this is an even bigger departure from the Salvation Jayne roots, but those willing to keep an open mind will surely discover an EP highlight. The simple verses give the bass plenty of room to weave more fuzzy grooves, but more importantly, there’s space enough for Smith to push her vocal to extremes. Her naturally bluesy cry sounds great when applied to something far more contemporary than before and when approaching a driving chorus, the fusion of hard rock, deep fuzz and slight electronica captures something that sounds superb when played back loudly. [An alternate “stripped” version of ‘Juno’ also closes the EP, in a take that highlights the trip hop-ish drum loops against an echoing guitar. This is a nice addition for fans of the original track, especially with Chess in such good voice.]

‘Black Heart’ takes a slight step back towards the band’s prior works. The name check of the previous EP would suggest the number has been kicking around in an unfinished state for a while, as would the more hard rock oriented chorus that strips back the dirt. In other places, though, the bass and fuzz elements appear deeper than ever and SJ really push their previous sounds into newer, heavier places, yielding fantastic results throughout. The constant push and pull between a defiant grubby metallic edge and Smith’s clean vocal provides plenty of entertainment value. It’s debatable as to whether older fans will be open to such grubby grooves, but in the end, it’d be their loss if they remained closed minded. A similar hybrid sound drives ‘Tongue Tied’, up until the point where a bridge section drops back into Royal Blood territory. While ‘Juno’ provides the EP’s musical standout, during this number, Chess offers her finest vocal. Her voice comes with an easy rock belt which contrasts brilliantly with the heavy groove set up throughout. ‘The Art of Falling’, meanwhile, retreats to a midpace and is a great showcase for Holly’s guitar work, as she throws out soaring sounds and great melodic counterpoints to the vocal throughout. With Chess finally exploring the softer side of her talents, this track is a real grower; while never as immediate with a riff or a hook, it’s a workout that’s full of emotion. By the time the mid-point is reached and the guitars are turned up a notch, the marriage of riffs and voice is very powerful; by the end, it almost feels like a different track entirely. With a huge wall of sound approach and out of a hard, ringing rhythm, Salvation Jayne really tap into some fantastic hard rock sounds.

To some, it might appear to some like Salvation Jayne have kicked their past selves to death and are now gleefully dancing on the corpses, but this EP is great. In some ways, it would be easy to accuse the band of having jumped on a different bandwagon, but let’s face it, by the end of 2018, straight blues rock sounds really tired. Here, Salvation Jayne have used their talents to create something with proper balls, all without losing focus of actual songs and hooks. If you’ve never heard Salvation Jayne before, don’t bother going backwards – this really is a new beginning. Crank the volume and enjoy.