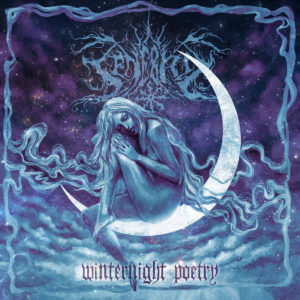 Chapter one begins with an electronic drone, before a huge classic metal riff crushes the cold and fragile sound. Soon enough, a heavy twin lead guitar sound take over completely…at least for a while. Eventually, the keyboard riff returns and both manage to hang on to important roles, even once a husky vocal demands attention. That vocal is often of the standard black metal persuasion and will be the thing that divides most listeners, but the music remains absolutely terrific throughout, borrowing huge influences from 90s doom and classic black metal, fusing them into a progressive style that often lets the melodies shine through no matter how heavy things get. If, somehow, you think that sounds like a DIY take on ‘Ghost Reveries’ era Opeth, you wouldn’t especially be far wrong. In extreme metal terms, it’s about as fine as you’ll find.

With deep drums and more of a gothic metal guitar riff at play, chapter two sets about building a dark atmosphere from the outset. With every couple of bars it appears more intense, even though the volume never actually increases. Eventually, a huge doom riff cranks its way and the combination of slow, heavy music and scratchy vocal makes In Tenebriz appear like a Euro black metal band channelling Cathedral. Once more, the husk of a voice isn’t always the easiest to take in, but a combination of stomping rhythms, doom-oriented riffs and chilling keys result in some fine progressive metal. With a lead guitar break more concerned with cold, hard chopping sounds than the usual thousand notes a second shred, there’s something very ominous about this track – especially when it reaches a brief interlude that sounds like a black metal Mike Oldfield.

Although chapter three eventually carves out some of the most intense black metal on this release due to a multi-layered vocal that pares the previous dark husk with a second voice that’s an ugly hissing anger, the track never loses sight of the band’s more melodic interests. It’s intro is especially soundtrack-like, while a lengthy mid section introduces clean toned guitars (again, occasionally reminiscent of a low budget Oldfield), before exploding into more heavy electrics of the Opeth variety. The chosen vocal styles make this the weakest track, so it’s a little disappointing when such intrusive noises eventually makes their inevitable return. Luckily, a final instrumental passage – this time fusing black metal traditions with a touch of early 80s metal – offers a suitable climax. The best elements of that track swiftly return for chapter four, only played more slowly, so it’s best to assume that Kai is now experiencing a bit more than PG certificate “mild peril”. Digging deeper than its surface heaviness – which, again, will be off-putting to some – there are a lot of layers and attention to detail…and as before, In Tenebriz manage to be more interesting when teasing with cleaner sounds leaning towards the proggy. All that said, what gradually unfolds over these six minutes is a cut above your average black metal […and there’s a lot of that out there.]

Chapter five is little more than an interlude by In Tenebriz standards, throwing out a circular riff that at first opts for the cinematic, then a thrash metal influence, before finally ushering in a black metal coldness. Like all of the album’s best bits, the sound mix is strong enough to hear every layer at every turn, so the biggest appeal ultimately comes from hearing a cold keyboard piercing its way through the wall of sound that’s been gradually built around it.

At this point, hopes are high for a great climax, but if anything, chapter six is less interesting – unless of course you came for a purer delve into doom metal with a black metal vocal. Heavy and intensive, the interplay between the dirgier rhythm guitar and harder shredding lead sound is always cool, but in terms of progression, it feels like a step back. Looking at it objectively, though, the muddier guitars have a real presence, but overall, there’s nothing within these five minutes to make In Tenebriz really stand out from the crowd. Luckily, the seventh and final chapter is superb. It begins with an absolutely beautiful ambient swirl where the keyboard sounds are cold, yet somehow still inviting, conjuring thoughts of floating in space. It’s like a modern sci-fi soundtrack inspired by a Tangerine Dream record from 1984. It has such an enveloping sound, it is almost disappointing when those ambient keys move aside for the track’s other aspects. With a slow build up, clean guitars play an equally wistful melody until a doomy riff and slow pounding drum take the weight. With an increased heaviness, the inevitable black metal voice arrives, but overall, this is more about the music – and with a great contrast between some very 90s sounding metallic riffery and a keyboard sound that almost seems oriental, there’s a hell of a lot to keep the listeners’ interest. Eventually fading away to leave a very brief cello sting, things seem to end somewhat abruptly, but if the album is viewed as a continual half-hour epic (as designed), it’s still a fantastic ending.

Overall, ‘Winternight Poetry’ takes a while to really get into, but if you can get past the vocal and just immerse yourself in the musical backdrops, in extreme metal terms, there’s so much here to like, especially if you’ve ever liked early Opeth. It’s a work of great contrast, forever shifting between traditional ambient sounds, through cold drone work, black ambient noise and back again, including moments that could be adapted for the symphonic metal crowd. It’s broad, bold and brave and for the more adventurous ear, most of it is also highly recommended.