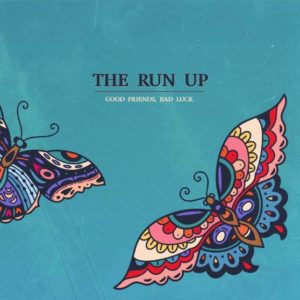 The Run Up are five friends from Bristol, always ready to bring the world big riffs and bigger choruses. Their brand of pop-punk is tougher than most, but within the riffs comes a fantastic sense of all things melodic, always allowing great hooks to catch the listener. Their debut album, a self-titled affair from 2017, presented a solid half hour’s worth of material but, if anything, this follow up EP is even better. The short format suggests the band have really streamlined their approach and decided to only share the very best tracks this time around.

The title track acts as a grand intro – a fifty second instrumental that introduces the band’s melodic skills with a guitar tone and a big sound. Recalling early Sum 41 with a dual guitar attack, this flows straight into ‘The Upside of Being Down’, a great track that delivers huge pop punk hooks and also injects a touch of blue collar rock. Musically, things are incredibly strong throughout: the main riff sounds like a cross between later works by The Ataris and earlier offerings from The Gaslight Anthem, which pretty much captures The Run Up’s chief interests inside of three minutes. As suggested during the intro, the guitar sound rarely lets up; the interplay between Loz and Charlie is fantastic and integral to the band’s superb sound. By the time a boisterous lead guitar weaves into the riff, it’s clear this is a band whom really know how to create great melodic punk, but always keep an edge. Things end abruptly, but it doesn’t spoil an otherwise terrific punky workout that’ll only take two or three plays to win over most lovers of things with melodic punk chops. Keeping with Transatlantic sounds but with English vocals, ‘Captain’ essentially offers far more of the same, only this time the Gaslight-isms seem more overt during the intro, while a slower and hugely bouncy chorus allows the rhythm section a chance to push forward. Harry’s drums are especially crashy and seem to enter the second verse – by now, speed driven pop-punk – with a real vigour. As before, the gang vocals make the main hook seem especially urgent and, overall, the push and pull between melody and grit is very effective.

Moving into ‘Eternal Ghost’, a grumbling bass underscoring a wall of ringing guitars recalls the best moments from The Ataris’ ‘So Long Astoria’, before another sizeable chorus comes with a sound that invites pogoing and shouting, despite firmly holding on to a melodic root. Parts of the number are injected by some great bass drum work and in terms of moving between the fast and more mid-paced, the band have never sounded better. Finally, ‘Keep Up’ showcases the band’s more rock oriented sounds at first, wheeling out a choppy guitar and punchy bassline, before shifting into the expected pop-punk for the chorus. The slower approach makes the shoutier end of the vocal seem a touch heavy handed in places, but overall – and especially given a chorus that sounds like it has crowd participation in mind – it’s fine enough…it just has the misfortune of having the tricky task of following a couple of genuinely superb tunes.

There isn’t a huge variety within this handful of numbers, but in all fairness there doesn’t need to be. The choruses are invariably huge and rousing – always good to hear an old-school gang vocal contrasted with the sounds of 90s pop-punk – and the riffs are solid throughout. For fans of The Ataris, Sum 41 and Rise Against (without the annoying vocal filters), this EP is a must hear.