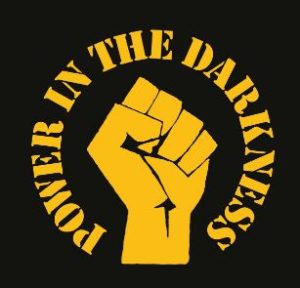 At just after 9pm, a bespectacled Robinson his and band take the stage. The audience don’t exactly respond in the way you’d expect. It’s not that they don’t care, far from it – Tom has some of the most loyal fans ever; people who show up at least once every tour. The muted response has a lot to do with the fact he’s already been on stage twice already this evening. In the guise of “Radio 6 DJ Tom Robinson”, he’s introduced the night’s supporting artiste – Lee Forsyth Griffiths – and also re-appeared following that support set to explain his own upcoming set. A set-up that doesn’t mirror the usual, this master of ceremonies approach gives the evening a friendly air.

Removing his glasses and placing them in his top pocket, “DJ Tom” becomes “musician Tom” and the front half of the crowd roars and springs into life with the opening chords of ‘Up Against The Wall’. A particularly punchy number, it comes across brilliantly on this occasion, even with Robinson’s by now gravel-edged voice giving the angry lyric a more mature quality. The band powers through the three minute belter with the kind of vigour you’d expect from a younger set of musicians. Tom – now sixty-eight – hammers at his bass with anger; by his own admission, he’s a better musician than he was four decades ago…and it shows. The pub rock vibe of ‘Grey Cortina’ bristles through the air and it’s lyric – certainly one that’s rooted in the late 70s – provokes more singing from pockets of the audience. Even at this early stage of the show, there’s a strong feeling of cameradarie and although nostalgia certainly plays a role, this isn’t just a nostalgia trip. Tom’s proud of the songs and the fact that he wants to apply them to the current (horrible) political climate is more than justified.

Moving into ‘Too Good To Be True’, things mellow a little, but it gives Robinson’s current band time to really shine. In a great rendition, guitarist Adam Phillips takes the melodic bluesy stance of the original studio cut and improves on it with smoother and more fluid playing. He shows off a lovely tone throughout, while Robinson’s pumping bass retains a strong presence without being complex. The anger of ‘We Ain’t Gonna Take It’ remains resolute – age has not weathered either the number itself or Robinson’s anger that inspired such a rallying cry. It’s here that Phillips’s sharp and angular chops really come into play, while Tom really wrings the neck of his bass. Approximately thirty minutes earlier, he promised we’d hear these songs with much better bass playing…and he wasn’t wrong.

Between songs, Tom becomes a master raconteur, recounting the Tom Robinson Band’s role in the Rock Against Racism event in 1978; of how he met his wife at an equality rally and “moved on the LGBT scale from G to B” and meeting Alex Harvey. Some of it is very relevant to the night and album in question; some of it, not so much, but it’s all incredibly entertaining. Following the true story of riots between American police and drag queens at the close of the 60s leads into a fantastic rendition of ‘Long Hot Summer’, featuring plenty of swirling organ from Jim Simmons. The way the band have shifted almost immediately from punchy power pop into something far more complex acts as a reminder – if one were needed – of how varied an album ‘Power’ actually is.

Reaching the mid point of the set, there’s time to reflect on the album’s vinyl origins and shared memories of record cleaning rituals and “blowing the fluff off”, something which provokes a very funny but also good-natured homosexuality gag from the ever-aware performer. If anything, tonight, Robinson is as loveable and as funny as when he supported Suzanne Vega in Canterbury some twenty years earlier. Less flippant – at least to begin with – are Tom’s recollections of being a gay teenager before homosexuality was decriminalised. He speaks with a disarming frankness about an attempted overdose, but knowing how to work an audience, he quickly turns things around by pointing out he “knew fuck all about drugs, took the wrong ones and survived!”. Other amusing tales include memories of an uneasy barman and Eddy Grant, but there’s a feeling you’d have to be present to really enjoy Robinson’s recollections.

Moving into side two, ‘Winter of ’79’ sounds absolutely fabulous. Sounding like a cross between ‘Up Against The Wall’ and ‘2-4-6-8 Motorway’ it’s an album highlight, and with Phillips filling the quieter moments with some tasteful lead guitar, tonight, it becomes a gig highlight, too. A frivolous high speed run through of ‘Man You Never Saw’ showcases a tight unit driven by basswork that sometimes evokes Joe Jackson’s ‘Got The Time’ and a flawless performance from drummer Andy Treacey. The sound is superb at the Shepherd’s Bush Empire for a change – this show features one of the clearest sounds for a rock-based band at the venue for some time – and that really lifts the rhythmic ‘Which Side You’re On’, before the power pop oriented ‘You’ve Gotta Survive’ and the album’s title track finish a fantastic main set. That title cut has been modified for the present day, too, with remarks about race replaced by swipes at millionaire businessmen with offshore bank accounts and pointed attacks how the nasty, right-wing spite peddlers at The Sun and the Daily Mail have the gall to call themselves champions of freedom. These changes are necessary; they make the song as relevant as ever and the audience are totally on board with a few visibly raised fists.

Something that’s clear tonight, not only from the music but also from the natural banter and tales told, four decades after his breakthrough, Tom Robinson feels as challenged by the world’s injustices as his younger self had been. At an age that most musicians have either retired or are living a blasé and comfortable existence, he has no desire to follow suit. He’s as politically and socially sharp and it’s a real thrill to note that, unlike most people in their sixties, his left-wing politics and feelings remain unchanged; he’s not softened or adopted flimsy centrist views. As he encourages the audience to take part in an upcoming anti-Nazi march regardless of their own political allegiances, suggests we take a moment to chat with campaigners outside of the venue and jokes about being the subject of a Private Eye cartoon, he is full of passion. Tonight – as always – is about far more than great music.

A three song encore brings a much lighter mood all round: the quirky ‘Martin’ invites plenty of crowd participation and shouting. While it doesn’t stand up to the ‘Power’ material, it doesn’t pretend to, either; this is purely fun, before the anthemic ‘Glad To Be Gay’ comes with a welcome reminder that despite a BBC ban “John Peel played the song anyway” and the expected ‘2-4-6-8 Motorway’ gets the whole audience roaring. When the opening notes punch through, they sound every bit as exciting as they did when heard for the very first time. Finally, ‘War Baby’ pays tribute to Robinson’s other hit. Smoother, it has all the passion and eloquence of the ‘Power’ material, but it’s messages are expressed in a less forthright way. This evening’s performance is by turns spirited and loving, poignant and lovely.

So many albums from the late 70s have been over-hyped, given sainted status and subsequently over-played. ‘Power In The Darkness’ is not one of them. Most of its lyrics are – sadly – as relevant as when they were written and the tunes are arguably far superior to so much other power pop and pub rock of the period. While most people over a certain age will know a couple of Robinson’s more popular songs from compilations, he’s still all too often overlooked as an artist and great lyricist. Tonight, his 1978 album – admittedly with a couple of altered lyrics – sounds fresh: the tunes really punch…the lyrics punch even harder. On the basis of tonight’s gig, for those in the know, ‘Power In The Darkness’ will remain a classic. In so many ways, tonight’s set has been incredibly moving – even for those not old enough to relate to the material the first time around.