The London leg of the Star Shaped Festival in 2017 was an absolutely joyous experience. The line up was amazing and Sleeper’s return to a London stage for the first time in nineteen years almost took the roof off. In under an hour, My Life Story’s Jake Shillingford turned an almost full venue from casual indifference to a feeling of unity; Space’s Tommy Scott and The Bluetones’ Mark Morriss were on form with great humour. Yes, that was a day to be treasured forever.

It’s almost 7.40pm and the 2018 London Star Shaped all-dayer is well underway. Memories of the previous year are still vivid, and so far, this day hasn’t felt anywhere near as magical. There’s been no real sense of camaraderie: it’s felt as if those who came to see Echobelly were there solely for Echobelly; those who loved The Supernaturals were only out for them, et cetera. Part of the problem regarding a lack of atmosphere, though, lies squarely with the venue itself. Brixton Academy has none of the general friendliness of the Kentish Town Forum. It feels bigger – up until this point, the main space has only been two thirds full at most – and the main bar is separate from the stage area. There have also been various sound issues throughout the day, with Jake from My Life Story sounding especially echoey. Brixton Academy’s high ceiling just isn’t conducive to great sound.

Black Grape were due on stage approximately ten minutes ago. There’s still no sign of them. In fact, the only clue that this won’t be a no-show is the fact that the stage is now bathed in a cool purple, grape coloured light. There are silhouettes shuffling just off side of the stage, so the band should appear any time now… 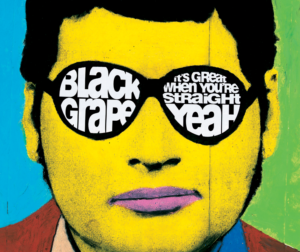 The DJ’s music eventually stops and various figures take the stage. A funky jam wastes no time in taking hold and Kermit shouts something indistinct into the mic. It doesn’t really have the desired effect of gaining a big cheer, but that sort of fits everything else today so far. A rotund man carrying a bottle and wearing shades shuffles on to the stage nonchalantly. That man, obviously, is Shaun Ryder. As their 90s hit ‘In The Name of The Father’ floats above the crowd, Ryder does very little beyond shouting the chorus line. The rest of Black Grape, meanwhile, are working incredibly hard to keep the funk in full flow. A core of people near the front bounce a little; everyone else seems less than bothered by the sights and sounds. Bringing the tune to an end, Ryder banters with Kermit. Their exchange is not clear. Shawn turns to the audience and shouts something about Tamazapan; this will be his only direct interaction with the crowd all night.

The loose grooves of ‘Tramazi Party’ flow into ‘Nine Lives’. By the time ‘A Big Day in the North’ kicks in, the rhythm section are literally working there arses off. Kermit’s rap skills and role as MC more than entertain in their own way, but Ryder appears to be facing sideways, clutching his bottle like a security blanket and not bothered whether he’s on stage or not. By ‘Set The Grass On Fire’ – just a few songs in – things have become extremely repetitive; the once impressive funk seems incredibly predictable, to the point where unless you know and love the band’s work intimately, it feels as if they’ve just played the same tune over and over. Ryder, meanwhile is still facing sideways…and just staring into space.

A double whammy of tracks from 1995’s ‘It’s Great When You’re Straight…Yeah’ bring the set’s genuine highlights with spirited performances of ‘Reverend Black Grape’ and ‘Yeah Yeah Brother’, which – as before – highlight the skills of the musicians backing both Ryder and Kermit, who eventually return to wittering amongst themselves between songs as if the audience isn’t even present. It’s a disorienting experience, almost like the crowd isn’t actually welcome. This is reinforced further by Ryder reading the setlist aloud, almost as if he’s in a rehearsal room and absolutely oblivious to his surroundings. ‘Pop Voodoo’ represents their current LP with none of the vigour of the early material and by ‘Shake Well Before Opening’ the band are on autopilot – the grooves not really any different from almost an hour earlier. Shaun then claims the set is finished. Kermit points out there one more on his piece of paper and ‘Little Bob’ eventually takes shape, though without the retro sax and organ accompaniment it’s more than a bit flat. Shaun and Kermit exit and leave the rest of the band to jam. The increased guitars bring more intensity; the bass and drums should invoke dancing, but the audience are still non-committal. The music eventually stops and a small cheer erupts. You’d expect a larger proportion of the crowd to respond, but in reality, the fractured feeling within the audience seems typical of everything that’s led up to this point in time.

Despite turning up late, a genuine arrogance has meant that Black Grape insist on playing their entire set, robbing Ocean Colour Scene of valuable time on a night when they’ll already be playing a drastically shortened set. Quality over quantity, though – OCS will eventually provide the big thrill and the togetherness that parts of a long day have often otherwise lacked – which is more than can be said for Black Grape in the main. Anything enjoyable about this past hour has been despite Shaun Ryder and never because of him: a rusty cog in an otherwise well oiled machine, he’s a man who is surplus in his own band and almost utterly devoid of talent. Black Grape have been better than expected, but still not in the leagues you’d hope for on a night out at a major gig…