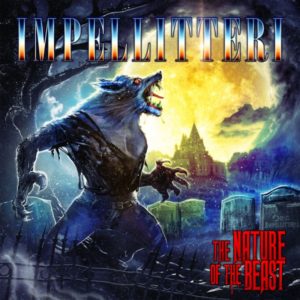 Three years on, ‘The Nature of The Beast’, on the surface, offers more of the same. With Chris’s trusty vocalist Rob Rock in tow and ready to deliver various howlers at full pelt, this 2018 release features twelve numbers with the drive and guts of early 80s metal and a set of lyrics to match. A few listens, however, uncovers a record that’s more varied than its predecessor – an interesting reinterpretation of a Black Sabbath classic and a couple of slower workouts mean the album isn’t entirely a dead duck. It’s unlikely to appeal to anyone whom isn’t already a fan – at least in the long term – but it tries much harder to mix things up a little and for that alone is a better album.

Interestingly, ‘Hypocrisy’ starts well with a slightly earthy sounding riff that could be from a classic Dio record, suggesting something preferable to anything on ‘Venom’ pretty much instantly. With a thunderous drum, a speed driven riff and Chris wheeling out a shredding lead fairly quickly, it all seems rather exciting in an old fashioned way. Unfortunately, most of the enjoyment is quashed by the arrival of the vocal. In keeping with previous misdemeanours, Rob howls his way through an hysterical rhyming couplet, leaving no doubt as to whether his lyrics have improved: “Welcome to the new world, where I am God and king” he belts, with all the subtlety of a leather trousered rhino, before quickly offering “Master of the humans, my puppets on a string” as the second half of a one-two sucker punch that seems particularly unsympathetic. Thing continue at full scale silliness until reaching a brief chorus where his unrelenting bombast is joined by pompous backing vocals, just in case things weren’t big enough already. Mr. Impellitteri and the rest of the musicians, meanwhile, work really hard to make their 80s brand of metal sound all powerful: the double bass drums are immense and Chris’s soloing is superb…it’s a pity such talents couldn’t be used on classier material.

“Run for your lives / Can’t you see the sky is falling” opines Rob during the chorus of ‘Run For Your Lives’ – a huge shred-fest that makes ‘Hypocrisy’ sound like a band just warming up. Very much cast in an old fashioned metal mould and then played at double speed, hearing this is like experiencing an old Rainbow LP played back at 78rpm. If you’re someone who thinks that Yngwie Malmsteen is a bit of a plodder, this’ll thrill you no end. For anyone looking for any kind of genuine emotion, it might just present a world of cold mechanics. In a marked improvement, ‘Fire It Up’ kicks off with a thundering power metal riff…and continues to fill the next three minutes in a similar fashion. The main riff features an impressive descending flurry of notes played at a million miles an hour and the guitar solo, although brief, includes some fine playing with great metallic tones. Being approximately half the length of a lot of the other tracks is a genuine benefit as it doesn’t introduce fatigue, but – as all too often – Rock’s lead vocal values too much noise over actual melody.

If the self-written material seems bad enough at times, there’s a cover of Andrew Lloyd Webber’s ‘Phantom of The Opera’ that needs to be heard to be believed. Rob shrieks his way through an already overwrought tune, which when played at the kind of speeds that Impellitteri so obviously craves, just becomes immensely tiring. …And when you’ve actually stopped laughing at the absolute ridiculousness – the sheer audacity of it all – there’s time enough to wonder whom actually thought this would be a good idea. Presenting a slower, meatier riff in a more classic metal style, intercut with terrific horsey squeals, ‘Kill The Beast’ shows how good Impellitteri can be when they just think a little more about melody, though. With a huge chorus, some well arranged backing and fine multi-layered soling, it is easily the album’s best track. With a slightly slower riff to work with, Rock clearly doesn’t feel the need to attack each line at full pelt and the results are more akin to latter day Dio than a second rate Malmsteen tune. A couple more numbers in this style and this album might have stood half a chance of being more enjoyable.

‘Do You Think I’m Mad’ opens with some downtuned, horsey grumbles that echo the most enjoyable moments of Pantera and follow through with a more melodic slice of metal that has hints of classic Megadeth, all set within the usual Impellitteri traits. There are times when the band even slows right down for long enough for Chris to show off a few different skills. In terms of metal that sits somewhere between 80s speed metal, Primal Fear and the Euro bombast of Royal Hunt with a couple of interesting solos it more than passes muster. It’s even better if you don’t listen to the silly lyrics, which on the surface appear to be about Baron Von Frankenstein, but there isn’t a clear enough narrative for it to carry through and in the end it just appears a heavy handed ode to mental illness. Also much better than usual, ‘Shine On’ is a decent power metal work out with drummer Jon Dette putting in some great work and some bombastic backing vocals injecting a bit of flair into a half reasonable chorus hook. Between the flourishes that fill space within the main riff and a couple of absolutely first rate solos, it’s also the album’s guitar playing highlight – easily a thousand times better than anything on the previous couple of Impellitteri albums. The fact that the lyrics are often indistinct enough to avoid closer scrutiny helps a great deal too. It’s a shame this is tucked away at the end of a very long album, since most people won’t actually make it that far…

Also required listening, a thrash metal version of Black Sabbath’s ‘Symptom of The Universe’ is a speed driven delight. On paper, you’d think the menace of the original wouldn’t stand up to being given such a kick up the arse, but with a full compliment of double bass drums, multi-layered guitars and some frantic soloing it becomes a fun tour-de-force of speed metal. It’s helped no end by the fact that the original riff is one of the classics, but the way Chris extends everything to drop in extended solos, squeals and other guitar wrangled treats, really helps to make the tune his own.

To be fair, if you’ve always loved Impellitteri and have followed him since 1983, there’s a very good chance you’ll absolutely love ‘The Nature of The Beast’. For everyone else – Sabbath cover, ‘Kill The Beast’ and ‘Shine On’ aside – the album will all too often represent a world of dated bombast that, at the time of release, is approximately thirty five years out of date. The fact that there are are two or three enjoyable tracks here – despite Rob Rock’s presence – automatically makes this superior to ‘Venom’… On the other hand, it is still hard work a great deal of the time. The chances of Impellitteri making a record at least half as good as 1988’s ‘Stand In Line’ ever again seem to be slim.