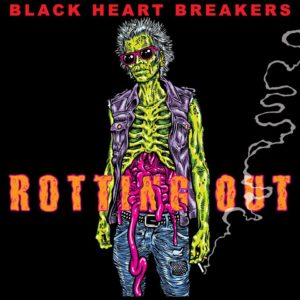 In punk terms, it takes about fifteen seconds for this recording to make an impact. ‘Why Not Me’ opens with a flurry of drums and hard chords, rhythmically accentuating the band’s punk ‘n’ roll stance. As the verse takes shape, things sound fuller and punkier until reaching a chorus bursting with gang vocals where a slight Aussie twang isn’t shy in presenting itself. Throughout the vocal sections, Black Heart Breakers show themselves to be great punkers, but it’s when approaching the instrumental breaks this track really excels. Taking a twangy oriented stance, guitarist Ando shreds as if he’s injecting a touch of psychobilly goodness whilst drummer Ben really makes good on the promise of the intro. The punky speed remains, but the rock ‘n’ roll spirit is so amplified it gives everything a real boost. Shifting to more of a Ramonescore ethic, ‘Melody’ is really sparky and retro in a different way. A familiar riff drives everything in a similar way to classic MxPx, while a pointed guitar solo hints at the bands favoured rock ‘n’ roll edge. Slightly filtered vocals make the track sound like the product of the early twenty first century as opposed to the pop-punk of yesteryear, but musically, it’s almost timeless. For lovers of the style that spawned a billion pop-punk bands in the 90s, this presents an especially thrilling two minutes…irrespective of any over-familiar chops.

The intro of ‘Angels Take Me Away’ promises something more old school, with particularly crashy count in a huge chord, but quickly drops into smartly played pop-punk of the early Sum 41 variety. The way the smoother vocal fits into a great riff suggests that in punky terms this would be perfect for airplay on slightly more alternative radio stations, but above all else, it’s the band’s musical skills that stand out. In this instance, the star is bass player Eddie, as he weaves complex riffs beneath the more familiar chords in a way that constantly pushes the track forward. As with the previous number, if you like things in the Sum 41 and MxPx vein, this will become a favourite. Giving an extra insight into the skill within the band’s playing, ‘Save Me’ is a defiant and sharp punk attack. Although the bigger nod to something more old-school might not always be the preferred for those not old enough to remember punk’s first wave, there’s a sense of camaraderie throughout that suggests this’ll be perfect for live performances, while ‘Burning Out’ returns to the rock ‘n’ roll drive of the opener. Here – on this EP highlight – the drums are frantic and the gutsy vocals of the verse really capture a great crossover style. With a horn sound giving the musical bridges an extra punch along with a reggae-ish instrumental breakdown this is, perhaps, the best example of how Black Heart Breakers hybrid sound isn’t shy in breaking down musical barriers. Last out, ‘Giving Up’ opens with voice and guitar in a vaguely folk-punk stance before exploding into a world of alt-rock sounds that give a final insight into some great musicianship. Instead of the expected punkiness, there’s a mid-pace almost blue-collar rock vibe, allowing the guitar chords to ring forth before a huge guitar solo provides a great centrepiece, while an anxious lyric about the fear of “being alone at karaoke” adds an almost emo slant. With so many punky moods covered, the band then bows out, knowing that this has been an amazing sixteen minutes – an exercise in quality over quantity.

These six numbers are fantastic – always broad enough to allow the listener plenty to time to become engrossed in the hooks and riffs, yet always speedy enough to satisfy that punk-fuelled itch. With great songs and sharp musical skills, its perhaps too easy to see these guys as potential first class peers to fellow countrymen The Living End and Frenzal Rhomb, but ‘Rotting Out’ really is that good. If you like punk that manages to deliver guts and melody in one quick hit, this one’s for you.