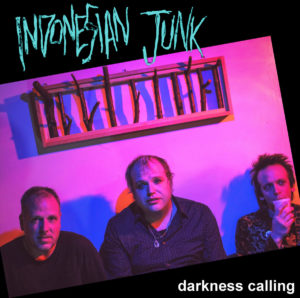 Right from the opening cut ‘When I Find You’, there’s a feeling that everything’s on the right track as the three piece band sound musically hard and tight throughout an especially frivolous two and a half minutes. Blending a late 70s vibe with some solid bar room chops, the rhythm section is much more foreceful than before, whilst Daniel James’s lead guitar work is fiery throughout, revisiting sounds that made so much of the mid 70s proto-punk so exciting. As always, his deep and drawling lead vocal style takes a while to attune to, but with the music sounding so confident, his lax approach seems to make more sense. For lovers of New York Dolls and their ilk, this should very much appeal. ‘See The Light’ captures another retro mood on a solid rocker that’s three parts Watts and one part Rose Tattoo. A sizeable driving riff is all that’s needed to make this number enjoyable in the main, and James’s guitar tears through each bar with a brilliantly grubby sound. It doesn’t especially add any new slants to bar room trashiness, but everything shifts from good to great by the time a multi-tracked solo fills the instrumental break, while some non-committal “woo-hoo”s and a lax lead vocal accentuate the trashiness of the overall arrangement. In terms of Indonesian Junk’s all sweat and no frills style, it’s another success.

During ‘I Could Die’, unfortunately, the band shows – once again – that slower numbers really aren’t their strong suit. It’s easy to hear their musical intentions, though: there’s something about the maudlin mood that occasionally wavers towards the slow tracks recorded by The Modern Lovers and Johnny Thunders and The Heartbreakers. There’s a fantastic drum sound and some great, natural sounding guitar work throughout. However, best intentions and great influences aren’t quite enough to see it through, especially when, vocally, James sounds half asleep… If there’s any reason at all, though, for the curious to check out this EP, it’s for a familiar cover tune. Indonesian Junk take the old Kiss nugget ‘C’mon and Love Me’ and trade in the glammier elements for something a little harder. Although they’ve played things pretty straight, there’s more of a grubby garage rock feel to their take, something enhanced further by Daniel’s shamelessly drawled vocals. With the guitars really cranked and another huge drum sound, the good time vibes from the original are certainly not lost. Warts and all, this is the sound of a band having a blast…and when they break into ‘Detroit Rock City’ unexpectedly during the fade, you might just feel cheated that things are over so quickly.

The vocals on this EP are still of the variety that could split opinion, but almost everything else is an improvement on their earlier works. It’s a joy to hear a band whom, as a general rule, seem to be getting better and tighter with each release and with a classic Kiss cover thrown in, there’s a little fun here for anyone who loves all things trashy. Even with an obvious mis-step, committed Junkies will be in their element.