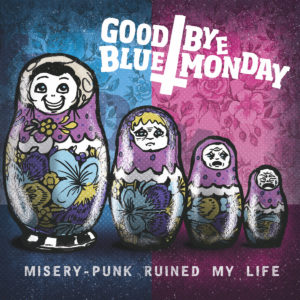 Glasgow’s Goodbye Blue Monday make no attempt to disguise their geographic origins. Even though a good proportion of the vocals on their 2018 EP ‘Misery-Punk Ruined My Life’ are of the group/gang shouty variety, there are lots of times where a heavy accent can still be heard. Although their brand of street punk – or “misery punk” as they bill themselves – already attempts to be of a forthright nature, this only gives the material an extra feeling of urgency. This, their third release, features three songs that despite the misery punk tag are actually really rousing.

The title track features a very self-depreciating lyric about failed attempts at writing happy songs and love songs, claiming that the more downbeat end of punk has clouded all judgement. Musically, it’s a fiery and tough number with high speed riffs that aren’t so far removed from Strike Anywhere, with the wrist-breaking rhythms topped by a hugely melodic counterpoint. Vocally, things lean towards the shouty, but the gravelly voice is a perfect fit for the grass roots punk, especially once the chorus delivers on a great gang vocal. The riffs are more distinctive than the hook – the music is something that grabs straight away – but a few plays is all that’s needed before it’s obvious that this is superb. …And it’s great to hear punk in this style that hasn’t been vocally filtered or come with a (fake) US accent.

If there’s any reason at all to hear this EP, it’s for ‘Worst In The Mornings’, an anthemic slab of frustration that takes musical cues from both adrenaline filled pop-punk and a touch of street punk. More so than before, the lyrics have a very pointed message: on the surface it seems to be about not dealing with early starts, but once the track settles in, there are messages about how there’s “a dark silhouette trying to take things step by step” and how handshakes can feel hollow. The black dog looms large…but when dealt with in such a way, it results in a number that can still be enjoyed again and again without feeling heavy handed or preachy. For a subject covered so many times within songs, there’s an odd joy in experiencing depression dealt with in such a forthright way that somehow still feels good. Still, such evocative words should have been expected from a band that donated profits from a previous release to The Samaritans. Musically, it’s a perfect companion to the opener; a number full of jagged riffs with just enough melodic edge to make everything very accessible. It’s great, too, to hear the rhythm section working so hard: there are a few times here where bassist Ross Gammie’s four strings really pierce through everything, despite contending with some chunky guitar riffs throughout.

Finally, stretching out a little, ‘Love Is A Noose For Two’ fuses a classic punk riff with an angry scattergun vocal for the main part of the verse, before unexpectedly slowing down for a pre-chorus that injects a completely different mood. For the chorus, there’s plenty of the gang shouting you’ve come to expect: everyone is firing on all cylinders, hovering between street punk anger and pop-punk cool. If the lyric doesn’t grab you, an utterly relentless “whoah” certainly will…and with a lead guitar part dropping in and out sounding as if it’s been infected by a bagpipe melody, there’s so much fun to be had here, despite the lyrical concerns – this time regarding the treadmill of life. It could be a bring down, but as before, Goodbye Blue Monday attack their thoughts and subjects with so much gusto, you just have to love it.

This is short, sharp and very much champions big hooks most of the way. With the music occupying a halfway house between classic UK punk and US pop punk, the arrangements never slouch, whilst it’s a genuine pleasure to experience lyrics that are much smarter than the usual pop-punk junk. Simply put, in contrast to its self-depreciating title and lyrics that deal with depression, ‘Misery-Punk Ruined My Life’ backs up some chunky sounds with a very celebratory vibe. With well written songs and some great playing throughout, this is highly recommended.