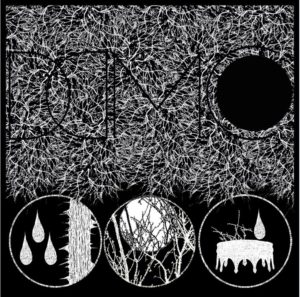 Portuguese hardcore band Don’t Disturb My Circles released their debut EP in 2009. The EP didn’t receive a lot of overseas press, but nevertheless the band continued to work hard promoting their work on their home turf. By 2015, they’d had shared stages with thrash legends Sepultura and Obituary, Cancer Bats and Dillinger Escape Plan, a band with whom their 2018 EP shares a few parallels.

Before the massive onslaught of anger, ‘Rotten and Pleased’ fades in with a sparsely played, slow and almost gothic piano sound, before scratchy vocals and a wall of sound break the mood in the most jarring way possible. Moving into the main part of the track, the production is immense, bringing out the sharpest edges of a relentless guitar riff that moves from metalcore into hardcore punk in a way that suggests a few things in common with Cancer Bats. Eventually, things slow right down for a moody mid-section where a grumbling bass takes the lead and howling guitars punctuate the intensely slow groove. Two distinctly separate pieces of music welded together with defiance – made a little more palatable by the use of a couple of art-prog time signatures and the kind of discords that would make Dillinger Escape Plan proud – this really shouldn’t work as well as it does. However, via a blend of belligerence and pure anger, its something of a hardcore victory and a great way to start the EP.

With the absolute power of Strife and the constantly shifting rhythms of artier metal, on the surface ‘Devil’s Shoes’ does more of the same. Upon closer inspection, the drum part is utterly insane: it never settles into a set pattern; for about three bars it’ll be thrashing out speed metal furies and then in a split second things shift to a spasmodic stop-start frustration of an old Melvins piece…and then it’ll fill about four bars with progressive grooves, before ushering in more quirky stops, thrash metal and hardcore anger. The rest of the band deal with this naturally, it seems: the guitar riffs are complex and jarring, but at the same time have a root within classic metalcore sounds (there are some brilliantly shrill sounds to be heard along the way) and the intense vocals come with a throat killing rasp, suited to a lyric that presumably helped shape such frustrated music. As is often the case with this kind of thing, it’s the music which leaves the strongest impression. Between this intensive workout and the opener, ‘Lower Canopy’ has already been worth your time…but it’s about to get even better.

Showing off a much purer hardcore sound, ‘Branches’ is a fifty second blast of noise that takes the pace of early Sick of It All but gives it a much tougher send off. Due to DDMC’s occasional metal fancies, a track with an eighties hardcore speed also has an occasional twenty first century metalcore crunch and the results sound like a speed-driven mallet. With plenty of pneumatic snare work and a puncturing cymbal, it’s another drumming highlight, but the way the track stops dead at the point you’re expecting a new riff to take over or even a hook to grab a hold is just brilliant. Hardcore may have taken detours over the decades, but when it comes right down to it, you can’t beat this kind of in-and-out-in-under-a-minute classic approach! Utilising pneumatic beats and stops, the EP’s closing track has a particularly striking intro, but by the time the vocals arrive, lurching hardcore metal takes over. It’s well played, but takes a bit of re-adjustment after ‘Branches’. By the second chorus, though, with the band powering through riffs that sit somewhere between Cancer Bats and Dillinger Escape Plan, there’s no question, it’s brilliantly played. Eventually channelling something even more hardcore with a set of slow and grinding riffs driven by a very hard drum sound, the number finishes in the most angry way possible. This track is best described as disjointed – there are at least three half-formed ideas welded together to fill three minutes – but at the same time, the playing cannot be faulted. It is perhaps a bit of a lacklustre closer, but that has everything to do with the other three tracks being incredible for the style.

Fusing bits of classic hardcore with progressive metalcore angles, this EP is often challenging and sometimes surprisingly arty, but it’s always absolutely furious. It also represents one of those times where the short and sharp EP format brings out the absolute best in the material; without the luxury of the full thirty-plus minutes, this material feels vibrant and powerful without becoming too repetitive. For those who feel the works of Gallows have taken too much of a predictable path or wish Dillinger Escape Plan hadn’t broken up…this one’s for you.