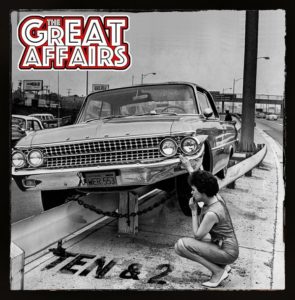 2018’s ‘Ten & 2’ has less of a hit and miss approach to previous Great Affairs albums, but when it hits, it does so square on and better than ever. It also approaches its art with a stronger rock bias than ever before. An instant hit, ‘Trippin’ Over Me’ mixes Denny Smith’s instantly recognisable vocals with a stop-start riff and punchy bass that places the band somewhere between the grittier end of The Gin Blossoms’ output and sweaty rock ‘n’ rollers Watts. The main riff is a 70s groover – as heard through a retro 90s filter – which suits the slightly husky voice admirably, while the sense of swagger between guitarist Patrick Miller and Kenny Wright’s drum kit more than suggests the current line up have some serious chops when it comes to live performance. Something that is, perhaps, stronger than before is the way a very melodic 80s styled hook is woven into the 70s backdrop; a fantastic key change and presence of an occasional backing vocal harks back to one of Smith’s side projects, The Die Youngs. In all, it’s one of the best Great Affairs tracks to date. Stretching out to almost six minutes, the punchy ‘Take The Ride’ occasionally hints at a love for early Kiss in the riff department, before switching gears and bringing in an AOR chorus that’s much closer to something from ‘These Days’ era Bon Jovi. Given the Americana leanings of the band’s earlier work, it’s a surprise to hear such a classic melodic rock style being flaunted, but despite Smith’s voice sometimes being at odds with such musical polish, it’s a great number. It probably could have been done and dusted inside of four minutes and been just as good, but to be fair, the extra time is mainly concerned with delivering the main hook a couple of extra times – and with a chorus so strong, it’s hard to blame them for milking it a little. A grubby slide guitar solo is on hand towards the end to pay homage to the band’s earlier musical traits, something that ultimately makes this number feel very natural. In fact, if you’ve never heard The Great Affairs before, this track is a great place to begin your journey: with a very strong chorus, great playing, a dose of radio-friendliness and a nod to roots rock, it has a little of everything you’d want for a fun listen.

With more of a warm edge to the bass, ‘Hands Off The Wheel’ wastes no time in finding its feet as a solid rocker. Despite a promising riff, though, it’s almost as if after giving their all within a couple of bars, the track has nowhere else to go. The chugging riff has promise and the production on the album allows a more audible separation of the instruments than ever before, and while a pre-chorus and twin lead guitar add a couple of other great moments, there’s something amiss here – a bigger chorus would have certainly helped. It’s not a bad track, but it’s easily outshone by many others on this long player. Much better, ‘Like Stone’ uses a two guitar attack and solid drum groove to drive a fine piece of blues rock. While he’s never possessed the biggest voice or range, Smith proves he’s up to the job, applying a moody Americana tinged delivery against something that sounds like a stripped back equivalent of something you’d more likely find on a Black Stone Cherry album. It’s the current GA line up fully embracing the big rock chops that arrived on their fourth release; by the time Pat steps up with a howling solo and the mellotron briefly takes on a bigger presence, this track asserts itself as one of the album’s best, even if it isn’t always derived from more of a traditional Great Affairs sound.

The defiantly retro ‘Sing Along’ is a direct throwback to the days when Great Affairs were Black Crowes obsessives, especially in terms of Patrick’s chosen guitar tone. It has one major difference, though: Kenny’s lead vocals add a much grittier feel to a familiar brand of Faces styled rock and he’s a perfect fit, sounding not a million miles away from Tesla’s Jeff Keith, whilst ‘What You Get Is Gone’ is rockier than anything in the band’s catalogue. A defiant 80s hard rocker, it’s as if they’ve been comparing notes with peak Great White, throwing out a slight bluesy vibe against some grubby guitar lines. Smith adopts a vocal style to suit and its uneasy approach between drawling and huskiness eventually seems very natural. There are better tracks to be heard on ‘Ten & 2’, but a gutsy feel and a cracking guitar solo make it worthy of cranking the volume and enjoying it on face value. It was inevitable that things would become ‘It’s Only Rock ‘n’ Roll’ era Stones eventually – albums such as this pretty much always do! – and, in that respect, ‘Back To Boston’ doesn’t disappoint with a natural swagger a la Ronnie Wood. Chorus-wise, though, the very American feel has much more in common with Great Affairs works from the ‘4’ album onward. A few gruff harmonies and swirling organ really bring things to life and a simple chorus sends everything off in style. It’s hardly reinventing the wheel, but it’s finely played and should be a massive hit with those who love mid 70s Stones, Watts and Dan Baird.

A rousing rocker, ‘Unfound’ taps into sounds that are close to classic Gin Blossoms and the vastly overlooked The Loveless. Theringing guitars really drive a strong pre-chorus and a superb radio friendly hook taps back into The Great Affairs past, too, so in terms of jangly rock, it ticks all the right boxes. With a feel-good quality throughout, it’s easily one of the best things on this album, while the semi-acoustic ‘Learn To Let Go’ could be derived from any number of 90s Americana tinged ballads – the sort of thing that made Danny Tate really shine. Presenting the more thoughtful side of Kenny’s voice, accompanied by sedate acoustic strums and tasteful piano work, it’s more mature than some of the band’s past works and he almost finds something timeless within. Picking things back up to full tilt, ‘The Day I Let You Go’ shows off the band in rock mode – all choppy riffs, big 80s drums and grubby vocals – and sounds like something destined to become a live staple. A cut above the rockers from their formative years, here Denny, Kenny and company wheel out some shameless twin lead hooks and a rousing riff, making everything seem so effortless. Being one of those tunes that doesn’t require its audience to over-think everything, by the time Patrick has launched into a short guitar solo, it’s hard not to turn up the volume and just go with it. Actually, that seems like sound advice…

Closing the album, ‘Last Good Memory (Revisited)’ is a re-recording of an old Great Affairs tune, originally a highlight from ‘Ricky Took The Wheels’ back in 2010. Eight years on, it’s a different beast. A selection of new wave inspired keyboards and filtered vocals suggest influences from The Killers and, at first, also suggest this mightn’t have been the best idea… However, as the tune finds its feet, the chorus remains an absolute stunner and the rejuvenated Affairs breath new life into a favourite with a real tightness. By the time you’ve heard the chorus for a third time and a section of Soul Asylum-esque ringing guitars careen everything over the finish line, you’ll have already long forgotten about the misfire of an intro. Then, once the album stops spinning, all you’ll have to cling to is the fantastic hook, so it’s a real win. You’ll wonder why they thought it needed revisiting at all – until, that is, you revisit the original cut and realise a great song was utterly weighed down by a slightly muddy mix, so it sort of makes sense. It would have been better if played absolutely straight, of course, but you can’t have it all…

It’s been a long road to this point, with a lot of experimenting to find out what really works, but approximately a decade on from their earliest musical steps, The Great Affairs have delivered a largely fine album. It’s never a perfect one, but with this kind of music, perfection and shine would only detract from the overall feel. In terms of its driving rock, long time fans will find plenty to enjoy, while the unenlightened should earmark ‘Back To Boston’ and ‘Take The Ride’ for future listening. Mixing some of the alt-rock choruses from The Die Youngs, with the retro rock of their earlier records and a pinch of their later-found grittiness, ‘Ten & 2’ feels like a Great Affairs greatest hits of sorts…and although you can’t please all of the people all of the time, if there’s any justice in the world, at least two of these songs deserve to reach cult classic status. It may not always retain the directness of the ‘4’ EP, but most of ‘Ten & 2’ comes highly recommended.