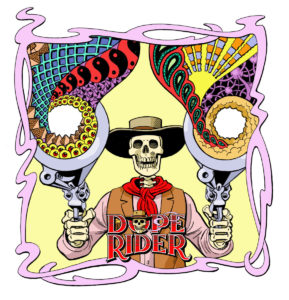 ‘Advorsus’, the 2016 debut from UK sludge fiends Kurokuma, was easily one of the heaviest things to be released that year. Since then, the band have played various live shows, one of which was released digitally for posterity; they’ve contributed to a split release with sludge pioneers Conan and even found time to record a Kraftwerk cover. Nobody expected that. With one thing and another, even though it has only been two years, a proper studio follow up from Kurokuma seemed to be a long time coming.

2018’s ‘Dope Rider’ EP is a concept piece presented in two movements, based on the comic strip of the same name. The comic tie-in obviously gives the release a really smart package but, as the old saying goes, you should never judge a book by its cover. Luckily – and somewhat predictably – the music is also superb…if indeed Kurokuma’s insanely heavy and oppressive sound could be called music in the truest sense. As before, these guys aren’t always concerned with obvious melodies; much like their forefathers Conan, the real lesson here is how to take a riff and slow it down to its most threatening tone whilst still being recognisable as a six stringed guitar, and to then take that and repeatedly drive it into the audiences skulls, preferably from the base of the spine upward. Needless to say, ‘Dope Rider’ is very intense. If you liked Kurokuma before, there’s a great deal here to chew upon.

The intro to the first movement is very interesting. The opening drum salvo presents a very deep sound and almost feels as if you’re experiencing an old Phil Spector disc played back at about 8 rpm. The shushing of cymbals adds to the detached unease and then the sludgiest riff in the universe cranks through at an insane volume. Each chord feels like it goes on for an eternity and yet, in sludge metal terms, it still sounds great. The arrival of a vocal increases the tension with an echoing and growling voice that sounds almost as if it’s coming from another room. Within a minute, Kurokuma have truly arrived. The riffs continue very slowly with the collision of downtuned guitar and earthquake inducing bass gradually feeling even more intense. Occasionally things shift up a couple of notches and occasionally wield a bit of distortion and fuzz, but the original grind remains stable. Without a notable chorus, this continues until the band sounds as if they’ve reached the point of combustion. This is the sound of pure anger; if you love a sludgy riff, you’ll be in your element – that’s a cast iron promise.

The second movement ties in much tighter with the brilliantly chosen artwork, in that its lyric is inspired by a classic Dope Rider cartoon strip from the 70s. Musically, too, it’s also got more of a sense of adventure. The main riff for the first part of the track delivers a fierce chug, almost with a marching feel. Underscored by a very deep fuzz bass, things are quickly in place for more classic Kuro-sludge. With the riff repeated, it sets up a great intro, before crashing drums derail everything. With the arrival of a vocal and the band making a ferocious sound, there’s more here than straight doom. With the drums and guitars seemingly playing two different things, the sludge seems keen to introduce a few elements of a more experimental noise rock sound – almost Men of Porn and Melvins-esque in its overall relentlessness – and while it’s hard going, it suits them well. Meanwhile, various layers of voices growl and retch, before the clattering evens out and Kurokuma find time for a more traditional sludge riff. At the point everything appears to reach a natural end, the noise falls away to reveal tribal drums and fuzz bass, exploring the art rock side of things far more. It’s one of those interludes that, in the hands of a band like Sleep could go on for a week. Finally, the band gels for a fucking amazing riff – easily their best ever – that locks into a tight and almost buoyant groove, allowing extreme heaviness to be informed by a more obvious melody for the first and only time, finishing this release on a maximum high.

In sludge metal terms, this is so well crafted. If you want it slow and heavy…and then slower and heavier still – in a way that occasionally makes the 2018 disc by Allfather appear lightweight – you need to hear this…and quickly. Whether two tracks is actually an EP or not should be up for debate, but Kurokuma say it is…so it is. You’d be foolish to argue with them. Also, these two tracks have a longer playing time than a couple of rather more famous hardcore punk releases that contain an album’s worth of songs, so it definitely doesn’t skimp on material. It’s probably worth mentioning that the fifteen minutes worth of sludge here seems to have been structured very deliberately: it reaches just about maximum impact before you’re possibly due a lie down. You have been warned…