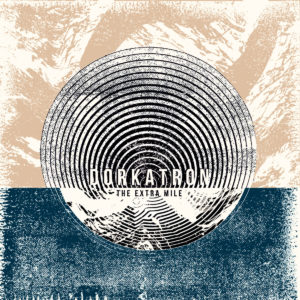 Dorkatron are a straight-up pop-punk band from Austria. Featuring ex-members of DeeCracks, the band arguably gained their most attention in 2017 when they released a Star Wars themed track, ‘May 4th’…at a timely moment in December. Such a funny thing to do. Perhaps they were inspired by the chaos and bewilderment of The Star Wars Holiday Special? Whatever, the main thing you need to know about Dorkatron is that despite not having the best name in the world, they create fine, fine melodic punk; better than a lot of the tunes given to the world by DeeCracks themselves, in fact, since, above all else the vocals on this second EP are hugely melodic. …And when it comes to a bit of longevity, that’s quite important.

Kicking things off with a bona-fide belter, ‘Is She Really Going Out Tonight’ takes a Ramonescore influence and strips it back to its bare essence. Powering a verse with a single chord between vocal lines, there’s a fine balance between guts and melody, before switching to something a little more traditional structured around three chords. With a balance between power, speed and melody very much at the heart of the tune, it’s no surprise when everything turns out more like Dan Vapid & The Cheats than DeeCracks themselves. The inclusion of a harmony filled chorus takes things up another notch and what transpires is a track that’s every bit as good as some better known acts. If you like Dan Vapid, the much missed Enemy You or Chixdiggit!, you’ll adore this, without question. With a hook that spells out the titular heroine’s name, ‘Luise’ is as catchy as fuck. Tapping into the kind of arrangement that fills most of Dan Vapid’s best work, the band motor through some tight punk, but the commercial edge – again – is where the appeal really lies. The guitar tones are crisp yet melodic; the gang vocals are spot on. The aforementioned chorus is one you’ll remember long after the disc stops spinning…great enough not to be outdone by a round of utterly shameless “gabba gabba hey”s en route.

‘Chemical Reaction’, if anything, makes the Ramones love even more obvious. With the influences presented in such a brazen way, it’s more than possible to hear bits and pieces lifted from the ‘Rocket To Russia’ album throughout and then slightly re-dressed in a shinier new suit, as per 90s bands like The Lillingtons and Enemy You. There aren’t any vocal steals this time out but, once again, the lead vocal is perfect – lending a pop-edge to a fine set of pop-punk and power pop chords, but the way the backing vocals drop in is absolutely classic. While the blatant Ramones steals are likely to win everyone over in a heartbeat, a mention must also be given to some great gang vocals which, obviously, really help to drive a fun hook home. ‘Lunch Money’ taps more into the band’s favoured dorky humour, presenting something that could even be Enemy You with its driving riffs contrasted by slightly shiny vocals. The big draw here, though, is the chorus regarding some pilfered small change which makes fantastic use of gang vocals. Stopping dead at a minute and half, this seems as if it pulls out before one last verse could make it truly special, but in terms of what we’ve got, it’s still brilliant.

When it comes to punk, sometimes there’s a fine line between political and frivolous and ‘Books Not Bombs’ doesn’t know whether it wants to use its generous minute to make a statement or just come across as utterly flippant. It’s the EP’s filler track, but even then, it’s hugely repetitious hook is effective, even if the music merely recycles ideas from other tracks. The title track, on the other hand, stretches further to include a melodic power pop lead guitar to counteract the speedy chords. Not always so much of the Ramones-by-numbers school, the intro adds echoes of The Only Ones for good measure. With a staccato riff driving a solid verse, there are moments where this owes as much to the 90s revival with Chixdiggit! and Fenix TX as anything, while some superb harmonies lend another great chorus some real chops.

While ‘Books Not Bombs’ could’ve been seen as disposable, tracks such as the title track and ‘Is She Really…’ suggest that Dorkatron are among the best pop-punk songwriters at the time of this release, despite their self-depreciating outward stance.

Yes, you’ve heard it all before. However, that doesn’t stop this EP’s six songs ranking among some of the best Ramonescore/pop-punk. Dorkatron have wisely realised that they don’t need to go the extra mile and/or put their own slant on things, they just need to be able to say that if ever faced with such a task, they could replicate the first three Ramones albums to near perfection. On the basis of this EP, their abilities to do so are without question.