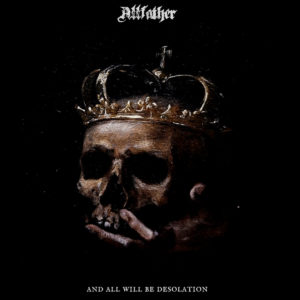 In 2016, Allfather unleashed ‘Bless The Earth With Fire’, a hulking brute of an album that valued riffs over chorus hooks, resulting in a record that presented the very best in sludge metal recorded on a DIY budget. Extensive gigging followed, including bills shared with the mighty Morag Tong. Over the next eighteen months, the Kentish band drove big riffs into peoples’ skulls from small stages whilst simultaneously teasing about working on new studio material.

The first new sounds emerged in 2017 with digital single ‘Inherit The Dust’, a track that ranked as Allfather’s best to date. With ‘Dust’, the general heaviness of the previous album was woven into a more palatable groove metal style. As part of ‘And All Will Be Desolation’ it still stands as a pinnacle of the band’s talents. The twin guitars wielded by Alan Cordner and Joe Goatham have a fierce sound, but also manage to deliver tones intrinsic to classic metal. Rather than opt for pure sludge, this track has a definite groove, as if the band have spent hours studying Lamb of God’s ‘Sacriment’ and then absorbing those influences into something a bit slower and certainly more DIY. Opening with a downtuned twin lead, things get off to a fine start, but it’s once the drums kick in that the track really starts to work. The drums are heavy and stately in a way that completely dictates everything else. The guitar riffs are heavy, but retain a tough melody, somewhere between the aforementioned Lamb of God fused with parts of the often overlooked Pantera disc ‘Reinventing The Steel’. Once the whole band hit their stride, it’s a classic slab of metal; topping the riffs with a throat wrenching growl, frontman Tom Ballard sounds so intense. This tune is so tightly wound, there’s little room for variation, but a brief section before an impeccably played solo slows down and teases with something even sludgier. In short, if you like it heavy and then heavier still, this deserves an instant place on many a great metal playlist.

A second pre-release single, ‘Black Triangle’ appeared in June 2018 and gained the band more press attention than ever. At this point, there seemed to be a lot riding on the album. ‘Black Triangle’ couldn’t be any more different than ‘Dust’, in that it has far less of a groove, preferring instead to tap into some severe sludge. In contrasting this, parts of the track also opt for an atmospheric sound, with cleaner guitars plinking ominiously in such a way that you just know those heavy parts will sound even heavier when they return. Also of note are the drums: during the more spacious moments of this track, the snare has a defiantly threatening crack, whilst during the heavy, almost groove metal sections they still dominate, despite Tom’s best attempts at ensuring his deep growls are upfront and centre at most times. …And then, there are the lyrics – this is not empty shouting for the sake of it; the black triangle refers to a neo-Nazi styled arm band worn by thugs that came to slaughter others while a complicit media did not stand up. At least that’s how it comes across – this is a frightening message for frightening times. Similarly angry, ‘Citadels’ offers the thought that “instead of burning flags, we should be raising hell”, which again draws parallels in a world where right wing extremists have been allowed far too much of a voice and the US, in particular, appears on the verge of collapse. Musically, it’s another belter, opening with some superb drumming and then breaking into fantastic brutalist hardcore, as if Allfather have set upon a hybrid sound of ‘Burn My Eyes’ era Machine Head and Superjoint Ritual. In terms of both musical tightness and production, it’s a huge, huge leap from their previous album. A genuine metallic tour de force, by the time Tom has stopped venting his anger and the instrumental break steps forth, the guitars howl and the tribal drums return making Allfather appear as if they’re channelling the most guttural end of Soulfly’s work. It’s a great track from the off, but it’s with the pay off line that it truly hits the listener in the jaw, with the aforementioned thoughts on raising our voices and raising hell pitched against a slow but incredibly heavy groove – by now, one part Machine Head, one part Lamb of God, all ferocity. Again, the production is such that Allfather sound so much tighter and more professional than ever before and with a devastating, grinding bass sound underscoring everything, this is a master class in metal.

While it’s obvious why ‘Black Triangle’ was chosen as one of the pre-release singles and ‘Citadels’ is bloody superb, it’s ‘By Sword, By Famine, By Plague’ that is the jewel in this collection. A slow and doomy riff quickly sets the tone and pace, very much a reminder of the previous release’s best moments, with a huge deep bass sound and drone rock elements informing the guitar work. That’s all before everything drops into a sledgehammer riff that unveils most of Allfather’s more primal side. Tom fuses his hardcore voice with a few death metal grunts and sounds as if he’s possessed by demons, while Alan and Joe’s twin guitars set about dropping into sludgy sounds, as well as heavy as hell staccato chugs as required. Into the track’s second half and things improve yet again as the band trade in the Crowbar-ish sludge for a few minutes’ worth of prime groove metal with the twin guitars hitting upon a sound that deserves to be considered quintessential Allfather, as it more than proves they can deliver on great metal melodies as well as pure sludge. With a terrific guitar solo to lift everything to the next level, this is easily one of the album’s real stand out tracks.

In terms of an album epic, ‘Lampedusa’ tries very hard to give the album some grand scale imagery. In just under twelve minutes, the track shows almost every trick within the Allfather musical arsenal, beginning with intricately played acoustic guitars, a heavy fuzz bass pirate shanty (yes, really) and – ultimately – sludgy guitars dropping into a slow Sabbathy groove…but obviously, only if Tony Iommi sported an eyepatch. The more oppressive parts of the arrangement are given a lift by some fine, almost bluesy lead guitar and the vocals absolutely destroy everything within a ten mile radius. After about four minutes, the lolloping sea dog arrangement starts to wear a little thin for anyone who stopped laughing at Alestorm after ten minutes, and the band are seemingly aware of this since they cast the main riff overboard and head into something much faster. What transpires is something that has more in common with ‘Citadels’ and the faster bits of ‘By Plague’, so obviously Allfather take this in their stride. With plenty of Machine Head-ish chug filling a fantastic four minutes, things sound fantastic, before a timeless sludge riff and heavy blues vibe finishes everything off with a sense of genuine power. Not all of this number works as such; the slow, sea shanty melodies will be an acquired taste, but the good bits are great. The fast moments and the acoustic overture, especially, are finely played, even suggesting that – should they ever want to – Allfather could experiment and stretch out even further.

With a bit less scale and far more punch, both ‘Jackal’s Night’ and ‘Lord Betrayer’ deliver Allfather heaviness without any extra padding, with the former settling on perfect mix of metal and hardcore, with sharp riffing made even sharper by scratchy, yelping vocals and a relentless pounded snare drum, while ‘Lord Betrayer’ taps into a great stoner metal sound, with their usual riffs tempered by the fuzziness of Goatsnake in a couple of places. While the guitar riffs are the most upfront element (pretty much as always), this track is a particular highlight for those who love great drumming. In his last studio performance with the band, Kieron Sullivan plays his arse off, always favouring presence and weight over flashiness. The way he rolls around the toms during one of the early verses recalls a couple of classic Clive Burr performances, while during the crashy closing section, he sounds like a genuine powerhouse coming off the cymbals and hitting things with hand-bleeding heaviness.

This is not necessarily better than ‘Bless The Earth…’; there are too many differences to make such a blunt comparison, but only a couple of listens are needed to mark its place as a great slab of extreme metal. It’s a recording that deserves to take Allfather to the next level. If you were a fan of Allfather previously, this album is everything you expected it to be…and more. If you came in search of riffs, the band are keen to deliver; if you’re not averse to a hefty and oppressive vocal, it has that going for it too. If you’re someone who loves both together and felt that ‘Bless The Earth…’ deserved a slightly better production job, then ‘And All Will Be Desolation’ is full of ugly and wonderful musical treasures.