In April 2018, Ramsgate Music Hall played host to Japanese indie/punk legends Shonen Knife. It was one of the greatest nights the venue had seen to date. Making what had already promised to be a fun night even better, the night’s support received a rapturous response. That band, KOLARS – a garage rock/retro duo from the US – impressed almost everyone with their display of sweat, sparkle and a tap dancing drummer. Within two weeks, the band had been confirmed to return for their own headline show and on July 16th, they took the stage at Music Hall once more.

Most of tonight’s crowd were there on that brilliant April night, so expectations for this evening are already running high. Luckily, the evening’s support, Smoke Season really heighten the already great mood within the room. Their music is unfamiliar to all and their first number suggests they’ll be a dream pop band, not a million miles away from up and coming UK act The Desert. As their half hour set progresses, their music takes all manner of turns, with numbers delving into heavy electronica a la Massive Attack, numbers which display a solid rock-pop stance – not always unlike a less disposable Rilo Kiley – but, perhaps most important of all – songs with a hefty dose of pop and soul. It’s on those numbers the best in frontwoman Gabby Bianco’s performances can be heard, and she has a great voice as well as a forceful physical presence. She spends much of the set lurching around the stage in a very provocative manner; whilst this may seem less important in larger venues, in this intimate setting, it’s almost impossible not to watch her at all times. Their set – although an unknown quantity – gains a huge response from the crowd. It’s always a bonus when the support is worth seeing and this has definitely been one of those times. 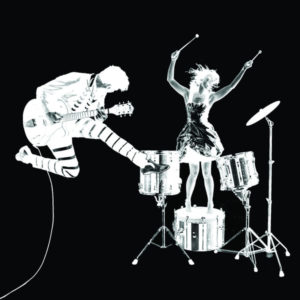 It’s now 9.20 and the mood at Ramsgate Hall is far removed from when Kristin Hersh played here just a couple of weeks previously. It’s also insanely hot and KOLARS have only just appeared. Between expectations and the ever rising temperature, this could be an intense experience. Taking his place at the microphone, Rob Kolar knows it’ll be a great night before the band have even played a note. “Ramsgate…our beloved Ramsgate!” he beams, in a display that proves it is obviously as much a thrill for him to return as it is for the crowd to see him and drummer Lauren Brown again, especially so far away from their home turf. Ramsgate loves them and that love is always reciprocated.

Opening with a cover of Neutral Milk Hotel’s ‘King of Carrot Flowers’, things warm up pretty quickly. On audience left, Rob cuts a great retro presence; his Gretsch delivers a heavy, clean twang, setting the tone of so much that follows. Over on audience right, Lauren stands upon an upturned bass drum, bashing two bass drums with mallets. Simplicity is key, but the sound is far bigger than their set up would ever suggest. Mixing that twang with a slight country air, ‘Bullet On The Run’ provides another great insight into a superb retro sound. A stand out, ‘One More Thrill’ comes closer to straight up garage rock, but is also one of the times Kolars’ not-so-secret musical weapon is unleashed. Filling plenty of space between the hefty beats, Lauren’s tap shoes rattle out rhythmic sounds as she uses her whole body as an instrument. It’s a wonderful spectacle, but also much more important than just a cheap gimmick.

Three songs into the set and the building feels like an oven. This doesn’t go unnoticed by Rob who removes his oversized jacket to reveal a really cool waistcoat with lightning bolts across the back. “This doesn’t usually happen until a couple of songs near the end!”, he quips before launching into another riff accompanied by heavy rhythmic beats. By mid set, obviously, everyone’s pretty grubby and Lauren’s make-up has been completely destroyed. Twenty minutes of bouncing, pounding and frantic tapping has made her look as if she’s jumped in an LA swimming pool fully clothed. Yes, it’s that hot.

Unleashing the noisier side of the Kolar’s sound, ‘Dangerous’ packs a huge punch tonight with Rob lurching around his end of the stage with the kind of energies shown by Jack White on the Conan O’Brien show, but it’s perhaps, ‘Turn Out The Lights’ with its multi-layered selection of triggers and effects that’ll stay longest in the audience’s collective memory. What’s clear tonight – and also from their April support slot – is that whether rocking out at full pace or delving into something with a touch more soul, KOLARS never give a lacklustre performance.

Finishing with an encore of the well-known country/rockabilly number ‘Mystery Train’, Kolars pay homage to important influences, while also encouraging everyone to join in on the woo-woos – something that seems to grab everyone, even those who’ve never encountered Rob and Lauren before and have come along tonight on local word-of-mouth. That same word of mouth has already suggested that KOLARS are returning in 2019. Five thousand miles away from LA, Ramsgate Music Hall has become KOLARS’ home away from home.

At just forty five minutes, KOLARS haven’t played for much longer tonight than they had on their Shonen Knife support slot, but what they’ve given everyone represents quality over quantity. While always friendly, the band haven’t attempted to pad out their set with unnecessary chatter to bring it up to the hour; nor have they stretched any of their tunes to fill time. They’ve arrived, slayed and exited, knowing that pretty much everything from their debut (and, so far, only) album has been represented and their job has been well done. Everyone’s happy. [For one of their Brixton Academy shows in 2015, Garbage charged almost six times the amount of tonight’s entertainment and they only played for seventy-five minutes. They an extensive back catalogue and yet Shirley Manson still filled a whole five minutes with a monologue about missing knickers. Talk about ripping off your fans. None of that tonight. No sir.]

Let’s hope that any talk of KOLARS coming back actually becomes a reality. At the time of tonight’s show, they are one of the finest live bands on the underground scene and if you’ve not yet had the pleasure of seeing them, you should definitely make the effort. For tonight’s crowd and with the very welcome addition of Smoke Season, it feels like we’ve all become a small part of music history. It may not have been The Beatles at the Winter Gardens or The Kinks at Ramsgate Pleasurama, but it’s ours.