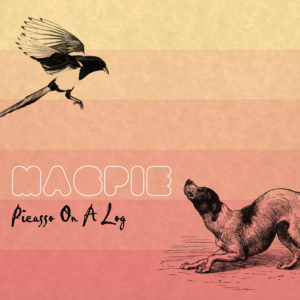 These four songs are heavily informed by sounds our Transatlantic friends like to call British Invasion, but like The Flamin’ Groovies, Chris Stamey and Robyn Hitchcock before them, Magpie also pepper their work with sounds of a late 60s San Francisco, leading to what could be described as an all-encompassing, short but enjoyable musical history lesson. Opener ‘She Knows Where I Live’ owes so much to The Raspberries and an easy, harmonious pop, but Magpie take those influences and turn out something quite lovely, as this track recycles sixties guitar sounds with precision, resulting in something that sounds like a long-forgotten jukebox 45, played through the filter of a band signed to the Beserkley label in 1978. While the guitars are pitch perfect in their retro aim, they’re totally outshone by four part harmonies on a great chorus where Magpie show off a great love for The Byrds and The Hollies. Those harmonies alone – when they sound as fine as they do here – make this EP worth hearing. ‘Wrote Me A Letter’, if anything, is even more sixties obsessed. Somewhere at the heart of the chiming guitars and the world of Badfinger drenched harmonies, you’ll discover music that sounds like another deep cut from The Raspberries. As before, the guitar tones are lovingly retro without being heavy handed and when it comes to the chorus, Magpie show they more than know their way around a great AM radio hook and a killer harmony. It’s a shame, therefore, that the rhythm section approach the whole track with the appeal of a metronome. While their chosen style never needs to be flashy, the harmonies are sometimes under threat; they have the possibility of dragged down by an uninspired beat at every turn. Luckily, the harmonies win out and while it’s perhaps a little…wobbly…there’s a decent song to be heard – it just needed a better send off.

With a steady bassline and unassuming beat, ‘Don’t Turn Your Back On The Sun’ pays tribute to a very British Invasion sound – specifically The Hollies. The music is simple, but doesn’t need to be flashy to recreate such a classic style. While it’s always possible to hear what Magpie were striving for here, though, it comes up short. There’s a nice melody, certainly, and some great “ba ba”s to finish, but there are a few too many troubling elements along the way. Again, the drums are uninspiring – often sounding like a drum machine – and, unusually, thanks to an odd key change, a couple of the harmonies sound flat. A mid section of “woos” and a simple but effective guitar break lift the mood, but it’s not enough. Compared with the opener, this sounds like a demo. Somewhat better, ‘Daisy Paints Her Fingers’ returns to form; the rhythm has more pace, which along with some chiming guitars and slightly nasal vocal tap into something that could have been taken from the David Myhr and Teenage Fanclub catalogues. For the want of a budget, the drum sound is lacking once more, but some solid bass, timeless 1966 rhythm guitars and Flamin’ Groovies-esque harmonies come together excellently on a rather catchy pop tune. It’s decades out of time and possibly all the better for it.

‘Picasso On A Log’ certainly tries hard and the songs are well written late 60s pastiches. However, the well written material isn’t always quite enough to see it through. As mentioned, the tiny budget is painfully obvious at times and the rhythm section can be uninspired, which, when measured against other DIY artists like Nick Capaldi and Mark Lane, sometimes puts Magpie very much on the back foot. But – and this is a big but – if you crave that unashamedly sixties style and you’re in the mood, Magpie can hit the spot. When they do – thanks to some of those harmonies – they sound very much like a band that could really deliver. Oh, for some time and money spent and a better drummer…