Aside from the appearance of Sleeper, it is certainly My Life Story who provided the London event’s finest set.  From somewhere near the back of the venue, it was possible to witness a sell-out crowd go from casual disinterest – it’s hard being a band on stage in the middle of the afternoon – to being completely involved and waving in unison.

Their winning presence saw the band invited back for a live performance at the Star Shaped Xmas Party in December ’17, which was another superb night.  [A full review of the night can be found here.]

It came as no surprise when My Life Story were announced to appear at the Glasgow and Manchester shows for the Star Shaped Festival in 2018.  Despite the London show including an exclusive set by Ocean Colour Scene, something felt amiss without Shillingford and his shiny-suited, boundless enthusiasm…

Several months after the initial festival announcements, My Life Story are pleased to announce they’ve been added to the London bill!

Regarding their return invite, Jake Shillingford had a few words to share with Real Gone:

“Last year’s Star Shaped Festivals were such joyful, energetic events and it’s humbling to have been asked to come back and perform for the second consecutive year“, he says.  “I’m really going to miss the giant glitter ball at the Glasgow ABC, it’s such a tragedy that we’ve lost another great venue. I wonder if they managed to salvage it during the fire? I’ll take it off their hands! However the show must go on and I’m looking forward to catching up with friends and fans across the UK once more.

“There’s a huge buzz about this September’s events and we cannot wait to get back on stage as part of this celebration of the era, I’m always amazed how many brilliantly crafted songs came form this time so I’ll be enjoying the day as much as anyone else. We’ll also be making another exciting announcement over the summer that will make these shows particularly special – watch this space!”

Sounds interesting… It’s going to be another great year for My Life Story’s fans…and if you’re going to any of the Star Shaped events but haven’t yet seen the band live, make sure you get there early.  You won’t be disappointed.

The three Star Shaped Festival dates can be seen in the below poster. For more details on line-ups, you can visit the Star Shaped Facebook page here, or follow them on Twitter: @StarShapedClub. 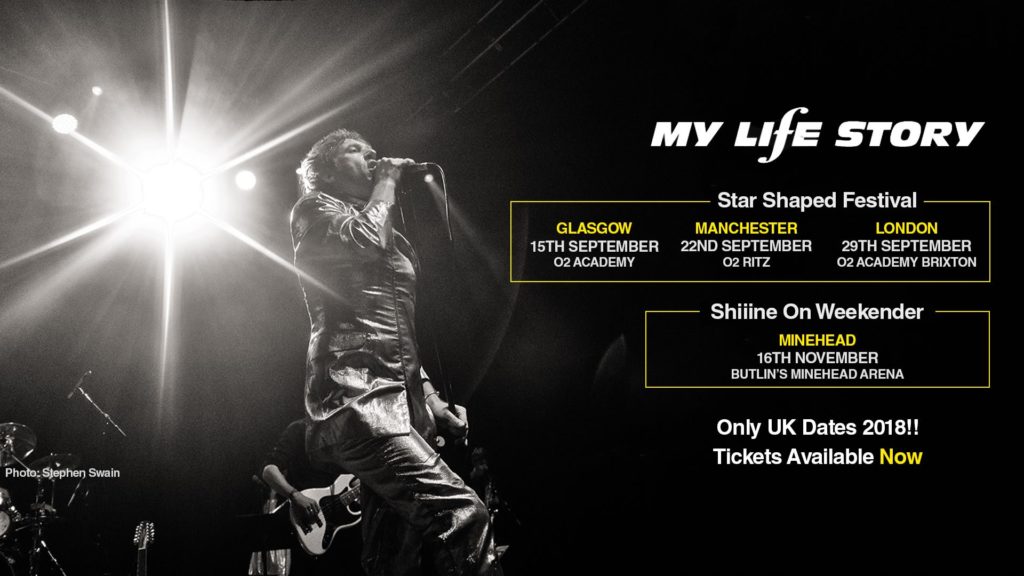