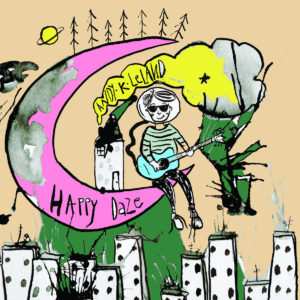 Andy K. Leland first came to the world’s attention as one third of Italian/Icelandic alternative rock band My Cruel Goro. Disbanding after just two (excellent) EP releases, the band decided that having members so widespread wasn’t geographically viable and Andy embarked on a solo career. The first fruits of his solo work are minimal. Fans should not expect the full volume Ash-meets-S*M*A*S*H riffage of his previous band. Instead, ‘Happy Daze’ presents Leland with an acoustic guitar and a few microphones in a lo-fi, introspective set up.

The EP’s lead track ‘The Kingdom’ sets up most of Leland’s minimalist interests straight away, as he wallows in a simple chord progression over which his voice curls and lurches around in a very loose and natural way. The way the microphones are set also allows the listener to hear the shuffling of his feet and breathing during the instrumental parts, much in the way Nick Drake’s Tamworth-In-Arden demos had done some decades before. While it’s possible to hear something of a very DIY singer-songwriter interest here, Leland’s heavily accented voice clouds the finer points of the lyric. The hard strums that make up the core of ‘Bistro Nights’ are culled from the world of late 60s folk and Leland hits upon a vocal melody that’s just as familiar. Like a long lost Donovan demo, there’s something primal at the heart of this recording as well as a reminder that most good musical ideas start with one man and a guitar. Song-wise, the chorus is bigger than before, but the shamelessly DIY recording doesn’t really let it grow to full potential. That said, a wordless melody during the coda lifts the spirits somewhat. Much better, ‘Home Grown Muck’ takes on a more jaunty feel – sort of acoustic folk meets power pop – much as if Leland has tapped into some old Britpop demos or else wondered how an of-the-moment musical sketch from XTC’s Andy Partridge might sound. The clarity of his acoustic strumming is lovely, parts of which manage to carry a shimmering tone despite the demo styled set up. With folk meeting acoustic pop somewhere along the way, it’s this track that makes the EP worth a listen for those who are in any way curious.

The subdued and echoing ‘Half Dead Dog’ conveys as much about the room in which it was recorded than the music itself. The creaks, cracks and tape hiss conjure imagery of a near empty room with bare floorboards, in the corner of which a man sits, ready to bare his soul to the world. The purity of the acoustic guitar sound is everything to this performance; had Andy taken to the studio and submitted a more perfect take with overdubs, the music would lose so much of its basic charm, but on the other hand, a bit of time in the studio would certainly bring out the lyric from its current mumbling state. Overall, despite only being short, there’s enough here to pique interest, so it can be a touch frustrating when things seem to end so prematurely… ‘Mr Panic’ retains a similar bounce and sound to ‘Home Grown Muck’, which combined with a carefree vocal makes it another interesting prospect (at least for a couple of listens), especially with programmed percussion that sounds like the work of a busking one man band. Without the luxury of a break, the tape carries on rolling after this jaunty interlude and is immediately contrasted by the sparse, finger-picked heartbreak of ‘Farewell’, a track that manages to convey plenty of emotion even with the lyrics only being partially audible. Slow and mournful from the outset, the tune reaches peak self-pity when Andy bows out with the line “there’s nobody to play…but me”, once again evoking imagery of a lonely musician reaching out from an unfurnished attic.

‘Happy Daze’ provides an interesting look into the mind and artistic workings of a budding singer-songwriter…but such a raw recording isn’t ever going to have a mass appeal. That said, fans of My Cruel Goro will find this EP an interesting curio, while other listeners hopped up on Robert Pollard’s boombox experiements and Andy Partridge’s old shed demos might also find something of interest.