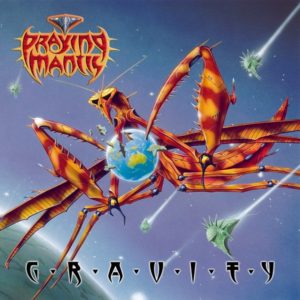 Opener ‘Keep It Alive’ at first suggests it’ll be one of the band’s huge AOR belters since it fades in with a whole world of multi-tracked harmony vocals. Unfortunately, this is a bit of a red herring; although the same vocals appear on the song’s chorus, they’re buried so deep within the mix, they just don’t reach full potential. The rest of the track shows off the Mantis melodic metal machine in full throttle, though, and depending on your listening mood, this could be both a good and bad thing. The drums are huge; the featured solo is fluid, mixing a melodic edge with a sense of grit. The big drawback, however, comes with a set of lyrics which are slightly embarrassing in their insistence on keeping up macho appearances. Still, if you’re able to look past those, Cuijpers is in suitably large voice and the double guitar front featuring Andy Burgess and founding member Tino Troy ensure that the long standing fans get plenty of grit to chew upon. It’s one of the album’s weaker tracks, so it’s unfortunate that its been used to create a first impression. Interestingly, the other wobbly offering ‘Final Destination’ is used to close the record, leaving a less than desirable impression once the disc stops spinning. Using a choppier guitar riff and a flatter drum sound, the effect of which pushes JayCee’s voice right to the front of the mix, ‘Final Destination’ is hard going. JayCee oversings more than a touch and without as much appeal in the music, that’s not such a good thing. There’s a lot of focus on staccatto drum work and an average chorus, leaving only the featured solos to lift the mood. Predictably, Tino steps up to the plate with some tasteful tones and great playing, but it doesn’t rescue a genuine misfire.

Luckily, eight of the nine cuts sandwiched between the two average numbers are all great – a couple could even rival tunes from ‘Legacy’ as Praying Mantis’ finest.

‘Mantis Anthem’ kicks off with some brilliant keyboards that sound like they’ve been appropriated from an old film company’s video jingle – or played by Rocky IV score composer Vince DiCola – before being joined by a stabbed piano motif. Obviously, someone in the band believes that the only thing better than big pompy keyboards are yet more keyboards and, in this case, its certainly hard to argue! After giving no indication of what will follow, the band switch the mood and settle into a mid paced, very punchy riff that allows bassist Chris Troy to take a dominant role. With a stomping groove now in place, Cuijpers wastes no time in curling his big voice around the riff, much in a that way the late, great Ronnie James Dio would surely approve. With a strong musical base, it’s now down to the chorus to lift everything to the next level…and it does so admirably. Granted, the various phrases concerning hand raising, joining the band and standing united and so on are cheesy as hell – cheesy enough to be exposing some serious blue veins – but in the band’s defense, they did forewarn everyone that it would be an anthem…and the guitar solo is absolutely cracking. Like Scorpions mainstay and hat-wearer Matthias Jabs, Tino is a master of filling bars melodically and efficiently, with no notes wasted. For all the reasons this could be awful, it’s both fun and heartfelt. If you’re not worried about the cheese factor being somewhere off the scale and you still like a good, old style melodic rocker, this’ll be a favourite.

Although centring around a huge AOR chorus replete with a world of vocals, the musical arrangement on the title cut manages to be almost as bombastic. Tino and Andy fill the bulk of the bridging sections with a superb Thin Lizzy inspired twin lead and the rhythm guitars take an equally tough stance, but if anything, these five minutes belong to bassist Chris who pumps the whole number as if his bass were a muscle, with a relentless mid-paced punch. It’s everything that bombastic rock should be and by the time you factor in how strong – albeit old-fashioned – the enormous chorus actually is, it becomes another stand out track. Offering similar levels of pomp, ‘Destiny In Motion’ finds Cuijpers in good voice on a number that sounds like it was tailor made for Jeff Scott Soto, placing him against a pumped up bassline, a slightly Euro-inflected chorus and some superb guitar work. For Tino’s fans, the huge and soaring guitar solo that acts as a centrepiece for this tune features some of his finest playing this time out.

‘The Ghost of the Past’, meanwhile, is a genuine skipper. While some listeners might like bombast for the sake of bombast, too much of this number errs on the side of sounding like one of Dream Theater’s more melodic efforts (and with those guys, its always an effort). Everything seems to reach too far both musically and vocally. JayCee pushes his voice to the limit and while he’s still preferable to James “What’s Melody?” LaBrie, it’s not so enjoyable, especially when bolstered by a keyboard replicating orchestrated elements. The least said about this, the better.

A couple of numbers nestled in the albums second half keeps the quality high, with the acoustic rooted ‘The Last Summer’ bringing something softer to the fore, while simultaneously not straying too far from the Praying Mantis roots. Perhaps Cuijpers could’ve turned his volume knob down just a touch, but even so, his performance is professional, passionate and reasonably powerful. Looking with a more critical eye, the backing vocals are too quiet, but its not enough to spoil a more than promising track, especially when the main melody is so strong and the intermittent electric guitars are rather tastefully applied. More interesting is ‘Foreign Affair’, on which Chris offers a fluid bassline and the guitars sometimes move away from the tried and tested melodic rock roots and tease with something that has more of a Spanish flair. Those with a keen ear might notice that there are a couple of moments where the melodies (probably inadvertently) borrow from Justin Hayward’s ‘Forever Autumn’ and ‘Zoom’ by Fat Larry’s Band, and the descending keyboard riff on the chorus is appropriated from a Foreigner classic (this time possibly more deliberately, given the song’s name). This has been an unexpected detour, but it’s great to hear the band trying something a little different.

One of the band’s greatest strengths has always been their ability to blend old style metal riffs with more melodic AOR hooks and in that respect, ‘Gravity’ offers a trio of tracks that really hit the mark. The wonderful ‘Time Will Heal’ is a pure AOR affair that pleases with chopping riffs, subtle keys and a world of harmony vocals. For long term melodic rock fans, this could have appeared on a number of Frontiers Records releases over the previous decade; it’s got a softer edge that would suit Work of Art, a thoughful rock edge that would be perfect for the likes of Find Me and their brethren, all coupled with a big vocal that Europe’s Joey Tempest could absolutely nail. This track is every bit as good as the more AOR-rooted tracks from the previous album. In fact, in Praying Mantis terms, its an instant classic. Similarly arranged and almost as good, ‘Shadow of Love’ might be AOR by numbers, but it allows another glimpse of Chris’s fat bass sound before wheeling out another cracker of a chorus. Little more needs to be said: if you like melodic rock with a classic sound you’ll have heard it all a thousand times, but in this instance you’ll want to hear it again. Returning to something a touch rockier, ’39 Years’ is a clear standout, centring a twin lead guitar around a mid-paced beat and stabbing keys from the outset, before launching head first into a gritty but melodic riff that recalls the likes of ‘Eclipse’ era Yngwie Malmsteen or various outings by Jeff Scott Soto and – once more – it comes with more than a trace of twenty first century Uriah Heep. While there might be a certain cheese factor, it’s well played and if you love rock with an 80s flair, the twin guitars and booming Dougie White inflected vocal will have plenty of charm…and that’s without taking an enormous harmony driven hook into consideration. These tracks, especially, are first rate Mantis and not to be missed, which more than makes up for ‘Ghost of the Past’…

‘Legacy’ was a hard act to follow. However, despite three misfires within the eleven tracks, ‘Gravity’ can still hold its head high with some first rate rockers and three AOR classics. There’s more than enough to enjoy here and this is one of those albums that, given time, really shows its appeal. With a little more care taken over the track sequencing its flaws wouldn’t be anywhere near as obvious, but on the plus side ‘Time Will Heal’ is definitely one of the band’s finest efforts. If you’ve ever had a liking for Praying Mantis, while this might not as good as ‘Legacy’, it is still very much a recommended listen.

Read a review of ‘Legacy’ here.