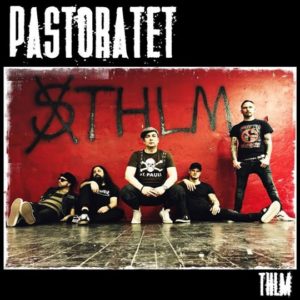 As labels like Burning Heart and Birdnest have proved, Sweden has been a hotbed of punk for years. Rather importantly, it has its own sound. Bands like No Fun At All and Millencolin share a common musical root with lots of the pop- and skatepunk bands from the US, but there’s something unique in the way the Swedes approach their art…and it goes deeper than a mere accent on a vocal.

In this respect, Pastoratet are no different, but the band – featuring ex-members of The Liptones and New Deal – play even closer to their geographical roots. Their 2018 EP ‘THLM’ is interesting in that it doesn’t plough headfirst into the skate-punk riffs instantly. At the outset of the opening track ‘Aldrig Mer’, the listener is treated to a world of acoustic guitars with almost a flamenco/rock crossover approach (not a million miles away from the intro for Metallica’s ‘…And Justice For All’) before a crushing hardcore metal riff changes the mood. Just as quickly as it arrived, that riff is gone and the speedier punk mood grabs a firm hold. It isn’t long before it’s obvious that those who love Satanic Surfers and early No Fun At All will dig the sound, but unless you’re fluent in Swedish, the lyrics will be a mystery. In some ways, it really doesn’t matter, since the vocals are still the finest in melodic hardcore and the chorus packs a huge punch with some crowd-pleasing whoahs along the way. Cranking the speed, ‘Mitt Så Kallade Liv’ comes across like a bass heavy Pennywise – especially in the musical stakes – but the presence of another melodic hook, this time with a dual vocal for extra beefiness, harks back to a couple of No Fun At All classics. The way the track shifts from full on riffery to a more refined selection of muted chords for the second verse gives the number a sense of the dynamic before an unashamedly old-school metal guitar solo fills various bars later with maximum crossover appeal.

‘Tak & Hej’ approaches punk with a bigger set of balls and ushers in more of a street punk and gang vocal style, and to balance the rowdier vocal, the music rises to suit. Even without an English lyric, the sense of camaraderie shines through, suggesting a track with a massive live appeal. By the time this number reaches the mid-point, however, the punkier elements take a back seat to a world of wailing guitars, as the instrumental break borrows heavily from old style metal, even going back as far as the New Wave of British Heavy Metal in the way the featured solo mixes a melodic bent with a grubby and tough streak. It mightn’t be a track for the punk purists, but in terms of showing the full range of Pastoratet’s talents, it’s a success and a half. Finally, ‘Radhusrebell’ ends the EP in classic style with a track that’s three parts full pelt melodic hardcore workout – again, like a cross between early No Fun At All and Satanic Surfers – and one part something more interesting. When stepping away from the hardcore traits, a melodic pop/rock interlude presents a very cool, clean toned melodic counterpoint, completely at odds with the gang vocals and enormous whoas that fill spaces elsewhere. By the track’s end, the blend of unsubtle vocals and a guitar part on loan from Dropkick Murphys sounds like a real call to arms.

Apparently, Pastoratet’s main lyrical concerns are with the insular “average Joes”, something that’s at its most stark during ‘Mitt Så-Kallade Liv’ [‘My So-Called Life’], but they’re also unafraid to tackle the fat-cat business men and the super-rich screwing up the world. Obviously, without knowing a lot of Swedish, more than even the finer points of this will be lost on an English speaking crowd, but musically, ‘THLM’ is so strong – with some fantastic melodic hooks every time – that language barriers ought not be an issue. If you’ve ever liked No Fun At All, Pennywise, Mute 98 or Hateful Monday (a hugely underrated band), then you should grab a download of this EP straight away.