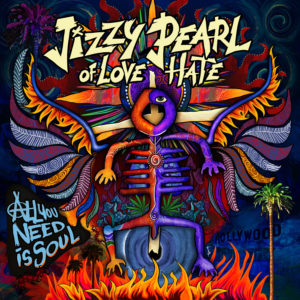 Taking the first few tracks into consideration, it’s easy to hear where he’s coming from. The title cut in particular has a fat riff during the intro that sounds like a clarion call to Pearl’s past. Part grungy, part glammy, but always melodic in a classic Love/Hate way, the riffs come thick and dirty and when those are coupled to a simplistic chorus and a furious guitar solo from ex-Love/Hate man Darren Householder (with more wah wah pedals than three Gary Hoey records combined), it’s a pure old-school adrenaline rush. The weight of the riff perhaps makes Jizzy’s vocals seem a little thin but, to be fair, it’s the kind of track where the riff is king. ‘House of Sin’ works just as well by focusing on lots of similar traits, but makes time for a stronger hook, something made better again by a solid rhythmic punch courtesy of Puddle Of Mudd’s Dave Moreno behind the kit. It’s hardly new ground for the jobbing vocalist – especially having served time in a later version of Ratt – but it’s still hugely appealing, especially given that some of Householder’s dirtier guitar chops can heard in full effect.

Lead single ‘You’re Gonna Miss Me When I’m Gone’ is one of the numbers where Pearl pushes his voice the most, but the sheer adrenalin of the arrangement means its one of those all or nothing type tracks anyway, and those who love the speedier offerings of Love/Hate and Kix will find an instant favourite. The whole band go for broke, thundering through a shamelessly trashy riff, which eventually finds time for a one-two punch of strong pre-chorus and main hook that sounds reasonably natural. Factor in a shredfest of a solo, this is the very definition of old style high octane rawk ‘n’ roll…and it’s all the better for that. Taking a similar full bodied approach but trading in the speed for a swagger, the double whammy of ‘Home To The Bone’ (fairly dubious lyrics, decent tune) and ‘High For An Eye’ allow the whole band to shine. There’s a faint flicker of Zeppelin’s ‘Candy Store Rock’ in the former, something that’s purely down to Householder’s choice of tone, but it really improves the overall feel, while the latter is a great number that’s all guitars and leather trousered machismo, leading to a balls out approach very much acts as an aural time machine to 1989. It isn’t especially different to anything that’s gone before, but the combination of huge riff and equally huge glam inflected vocal make it hard not to think of Love/Hate from back in the day. Repeated plays really help to cement the album’s feeling of strength.

‘House of Soul’ has something about it that calls back to the Love/Hate days of ‘Wasted In America’. Maybe it’s the subtle blend of rootsy guitar beneath the glam; maybe it’s the sleazier approach to a chorus…whatever it is, it’s disposable fun. The album’s only weak link, ‘Little Treasures’, on the other hand, is anything but. It occasionally sounds like a heavy handed ‘Misty Mountain Hop’, albeit played through the prism of 90s Dokken. One of those things that probably seemed much better in theory, the riff is okay, nothing more, but the chorus is somewhat lacking. While Jizzy tries his best, his performance isn’t as good as most of the others here, either. You can kind of hear what the band were aiming for at every turn, but it doesn’t work. With that said, ‘All You Need Is Soul’ was never going to be a perfect affair, was it? Even with this track lowering the batting average, it’s still a much better record than anything Love/Hate recorded between 1995-99.

Moving on, ‘Mortified’ takes a dirty blues rock stance, allowing Householder plenty of room to throw out some heavy and fuzzy sounds, while the slightly slower pace brings out the better elements of Pearl’s voice, even sounding like his younger self in a few places, while a similar bluesier stance really comes out in force during the stand-out track ‘When The Devil Comes’, a sort of sleazier take on the kind of meat and potatoes heavy blues served up by Black Label Society. Pearl’s unmistakable vocal is always there to ensure you never forget who’s in charge, but it’s Householder’s mastery of a riff that drives the number: his choice of main riff is perfect for the job in hand, but the switch to psychedelic phased effects for an interlude and a killer solo lift the tune to higher heights all round.

Elsewhere, the high octane rock of ‘Frustrated’ works everyone into a sweat on a spiky tune that sounds like a homage to Rose Tattoo, albeit with a trashy nod to sleaze metal to bring things closer in line with Jizzy’s past. The riff and energy behind this number is impressive enough to just about forgive the fact that someone possibly forgot to write a chorus, but it’s also the kind of tune that’ll work better live. ‘Mr. Jimmy’ takes a crushing riff that borrows from Led Zeppelin’s ‘Out On The Tiles’ with a descending scale, adds very punchy drums, a few references to other Zeppelin things (including the titular Jimmy) and then recycles them in an almost unstoppable juggernaut of sound. Like ‘When The Devil Comes’, every care has been taken to balance the heavy with melodic elements here and while this isn’t an instant stand-out, repeated listens reveal a rather fun workout – especially for the less up-tight Zep head. The album’s ballad, ‘It Doesn’t Matter’, meanwhile, sounds like a great vehicle for Pearl despite him not having a voice that’s obviously attuned to softer materoal. The slight country edge means you’ll certainly hear traces of something similar by Poison, but with nods to Aerosmith and a few riffs where Householder plays with a great fluidity, it ends up sounding like more than the sum of its parts and is also much better than first appears.

It’s fair to say that this album isn’t as good as ‘Black Out In The Red Room’, but only a fool would think it could be. There are at least four tracks that act as a great homage to those bygone days, but that’s not to say the rest is in any way disappointing. Quite the opposite, in fact. In the main, ‘All You Need Is Soul’ is a hugely enjoyable slice of old-school hard rock. While it is unlikely to win Jizzy any new fans at this stage, it is perhaps more important to note that hearing the album from end to end, you get to experience a man and band who sound like they’re having a great time in the studio rather than going through the motions.

And on a recording such as this, that counts for a lot.