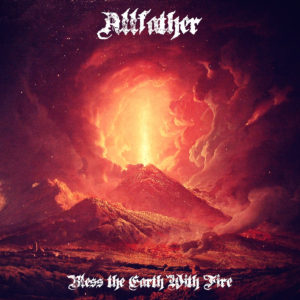 Formed in 2014, Allfather came together over a shared interest of “vikings, anti-fascism and crisps”. It’s good to know the band have a sense of humour, because their 2016 release ‘Bless The Earth With Fire’ is not one to be taken lightly. Its six songs – if, indeed, they can be called songs, rather than an extended collection of devastating riffs – are heavy, dense and sludgy in equal measure. In short, if you’re a total riff junkie and value the weight and presence of a riff over almost everything else, you’ve come to the right place.

Their never-ending love of a doom riff isn’t shy in presenting itself, either. Although ‘Raskolnikov’ opens with a repetitive drum groove and a few distorted chords, giving the feeling the track will descend into the heaviest groove metal of a Lamb of God variety, things soon slow down and very much heavy up. The twin guitar assault from Alan and Joe is both muddy and intense, like a Crowbar classic meeting with Morag Tong’s sense of devastation. Things don’t lighten up much with the arrival of a vocal that’s gut wrenchingly aggressive. Frontman Tom doesn’t have a voice as much as a post-apocalyptic growl; each syllable sounds as if it emerges from a hairy alien mutant. Obviously, a small period is needed to adjust and soon enough it’s clear that his intense collection of grumbles and roars is perfect for the riff in hand. If you’re concerned that Allfather’s only concern is a repeated doom riff, fear not, as these four minutes actually take a few interesting twists, albeit from the heavy to the heavier still. The opening of ‘The Bloody Noose’ wastes no time in presenting a retro riff with a howling blues edge. The solo guitar motif hints at great things ahead, and sure enough, once the entire band crashes in on a heavyweight arrangement there’s almost enough heaviness within the riff to please most fans of the style. It’s a slow and sludgy affair as opposed to a genuine groover, but there’s plenty on offer to show that Allfather genuinely mean business. After a few of minutes of solid pounding accompanied by an intense vocal take their toll, everything switches gears and Allfather show equal power when it comes to something faster – in this case, some speedy stoner sounds that come across like Fu Manchu but about six times heavier. It’s brilliant…but as with so many good things, it’s gone by the time you realise just how good it is. Returning to their original slow doom riff, everyone steers the end section of the track to glory and a surprisingly sudden end.

The album’s highlight, ‘Mouth of the Beast’ presents an opening couple of minutes that seem quite chirpy by Allfather standards. It’s still heavy of course, but comes with pace and sweat. The cranked up guitars deliver a quasi-melodic riff which when locked into a solid drum groove results in some classically intense metal. There’s a Sabbathy swing to the riff – akin to the faster parts of ‘Children of The Grave’ – but also a more contemporary heaviness, especially in the vocal department. This track, at least at first, takes the band’s key traits and applies them to the kind of Lamb of God love that’s constantly present in Backdawn (one of the best metal exports from France, probably ever). At the mid point, though, it’s all change and Allfather lurch forward into a slow and repetitious riff that allows a heavy bass sound and still heavier guitars to destroy their listener’s skulls. In five and a half minutes, all of Allfather’s best traits are present, making it an essential listen if you’re into this brand of intensity. Similarly, during the shorter ‘Dark Actors’ there’s the heaviest groove metal at play, only this time punctuated by a heavier drum and a repeated refrain. The brevity of this number and an increase in bass devastation also places this on a high threshold for sheer quality; the way the heavily downtuned guitars lock in with the drums is impressive enough to make it stand up alone, but Tom’s unhinged growls filling rhythmic space on a repeated hook provides one of the album’s most memorable moments. These four minutes of fury show how effective extreme metal can be, even without any desire to alter the musical blueprint.

For those who like their doom of a slightly purer variety, ‘Death and Hell Followed With Him’ certainly will not disappoint. For four minutes, the guitars churn out a slow chord progression shifting from atmospheric to heavy as hell; it’s slowness would be emotionally draining, if not for an almost narrative vocal that gradually paints an ominously dark scene. Musically, it’s weighty and repetitive, but in doomy terms, it’s more than powerful enough. The second movement of this epic number brings equal thrills, beginning with an almost militaristic, rattling drum part and scorching guitar solo ripped from the guts of an old New Wave of British Heavy Metal Recording from ’81. Keeping with the fast riff, the entire band play their arses off, before dropping into one of the best groove metal riffs ever. At the six and a half minute mark, complex twin guitar work rises and although all of the main musical bases have now been covered, Allfather stretch their heavy prowess out across another five minutes without sounding like they’re labouring a point. In terms of variety, it’s not just the music that covers all the bases: while the majority of Tom’s vocals are concerned with borderline death-growls, there’s a flirtation with throat-rawing yelps too, with an influence closest to the most intense performances from Phil Anselmo. In closing this track, the band return to the slow and pounding riffery of this track’s origins but temper the slow and weighty with occasional twin leads in an 80s mood…and it’s hugely enjoyable. While this number is – obviously – hard going at times, it’s also fabulous…a natural closing statement for the album.

The album download also includes a bonus track, ‘Blood Red Sunset’. This less doomy affair is a great showcase for all concerned: there’s a killer riff from the outset – although Joe and Alan both favour a crushingly heavy style, the different tones often come through just enough to create a well balanced sound and when it comes to the lead break, one of the players shows no fear in filling several bars in a fairly old fashioned style, much like Andreas Kisser from Sepultura, circa ‘Arise’. If you like old school metal with a DIY budget there’s much to love here although, being recorded at a different time, naturally, it does sound a little out of step with the rest of the release.

Parts of this album are so intense it’s hard to believe it runs to just thirty three minutes. If approached in the wrong mood, you won’t make it through in one sitting, but there’s no doubting the talent that shines throughout. If you want it heavy…and then heavier still, these guys will be more than happy to supply you with that fix. For a DIY affair that is so obviously a labour of love, although incredibly intense, ‘Bless The Earth With Fire’ is very enjoyable and deserves to attract a devoted audience of sludge fiends.