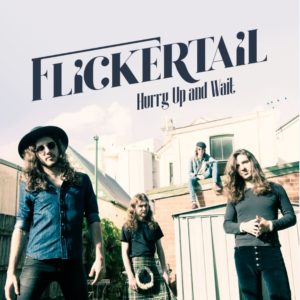 Formerly known as The Bitter Sweethearts, the four musicians that make up Flickertail were drawn together by a love of classic rock. While their debut EP carries a very solid and classic sound, it never plays as if – like so many bands doing the rounds – they’re content with hammering out tried and tested clichés and trying to be a heavier version of Free or Rival Sons. Their work sometimes has an old soul and is often very melodic, but this EP seems very keen to shake things up in places, which in this case and a world of tired sounding rock acts, is a very good thing. The purists mightn’t like that, but it’ll be their loss.

It takes about four seconds before the intro of ‘Let There Be Love’ forces you to take notice with a barrage of twin guitar sounds, tapping the fretboard like a fuller sounding version of Angus Young launching into the intro from AC/DC’s ‘Thunderstruck’. With this set in place, the rest of the track drops into a melodic classic rock style that – perhaps due to the band’s geography – sounds more like a hybrid of Powderfinger and Jet than the usual Free wannabes. The chorus is a big and rousing affair, without ever resorting to shouty gang vocals: in fact that big but soulful approach adopted by frontman Liam Whelan, combined with some fine harmonies really takes this track to the next level. Verse wise, it’s less impressive – at least on the first couple of listens – but the lack of clichés suggests there’s at least one great writer in the band. The AC/DC inspired riff eventually returns at the close before everyone drops into a huge weighty chord to finish. Drifting into silence, it feels like a job well done, with barely any time used for obvious padding.

‘Talk’, at first, comes across as a touch weaker due to Liam reaching for high notes that don’t sound quite so natural when set against muted strings, but once the rest of the band join the arrangement it grows into a superb number, though quite different to the opener. The sounds of 90s rock that emerge – with bits of Limblifter, Neve and Soul Asylum – really take over and the way jangly guitars are used could be enough alone to suggest their previous moniker of Bitter Sweethearts might’ve been taken from the similar named Soul Asylum classic. For those looking for something a bit closer to old school hard rock, the instrumental section is on hand to please, with the twin guitars dropping into some heavy blues-rock vibes with an impressively tough edge. Yes, this makes this song sound like to separate ideas welded together at the last moment, but it was obviously too good a riff to throw away…and to their credit, it works.

At this point, some bands would take time to slow down. Instead, Flickertail use ‘Fade’ to explore yet a different retro rock slant. With drummer Marcus Fraser firmly in the driving seat, there’s a bigger punch to the verses, accentuated by choppy guitars, before a full blooded chorus drops into ringing guitars and a hazy feel that could be the softer side of Jet. There’s nothing here that’s especially original, but the combination of an occasional descending scale, some great vocals and a Thin Lizzy-esque lead break come together in a way that makes it a fun listen. ‘Green Eyed Girl’, meanwhile, is the EP’s weak link: a sparser feel doesn’t give Liam as much to work with and a lop-sided waltzing quality and a few roaring leads that sound like a crass Lizzy steal make this track sound far too much like the Darkness’ xmas song in places (though thankfully without the shrieking vocals). Things are rescued somewhat by a very tasteful twin lead solo and, moving into the last chorus, it actually becomes a grower but it doesn’t match the other numbers for all round quality.

The release closes with ‘Back of My Mind’, a solid slab of melodic hard rock that also saw release as a video single just ahead of the EP itself. On the one hand, it seems odd that the band would keep something so accessible tucked away until the very end, but as the track gains momentum it becomes quite obvious why it’s perhaps strongest as a final offering. Whelan is in particularly good voice; the darker and crooning edges get plenty to work with, even before the hooky chorus where the vocal rises from a moody blues rock stance to something in a higher register – a move the frontman pulls off with ease. The music, meanwhile, increases the pumping bass (well played by Matt O’Callaghan) but still keeps the focus firmly upon the guitar. There are faint traces of various 90s bands throughout – always faint influences, never direct lifts – and the 90s feel is also omnipresent in the way that things remain tough but never showy. There’s also more than a nod to the sadly missed Powderfinger’s moodier material once more and yet, somehow, this feels quite far removed from the likes of ‘Let There Be Love’ in places, which is a great testament to their talents. In all, this is a fine melodic rock single, but it’s the extended instrumental work at the track’s end that dictates it’s placing within ‘Hurry Up…’, with with Whelan and Jonny Goldrick trading some great phrases.

Like the UK’s own Bad Touch and The Bad Flowers, Flickertail come across as being very natural at all times, and even though their music isn’t necessarily of the same heavy blues variety, a similar feeling of love for their music comes through on this recording. This EP sounds better with each successive play, so some of that love and enthusiasm should – in theory – rub off on the listening audience. ‘Hurry Up & Wait’ doesn’t try too hard to be original. It doesn’t try too hard to be flashy. There could be various reasons for this, but it’s simply because it doesn’t have to. Recommended.