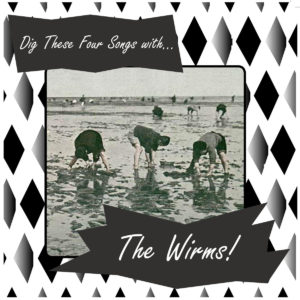 Two decades on, The Wirms aim to continue the traditions of their forefathers and while their ‘Dig These Four Songs…’ EP might have a whiff of novelty upon its surface, the reality couldn’t be any different. In and out in under a minute and a half, ‘Magnolia Tree’ is a terrific slab of hardcore. The guitars thrash at a breakneck speed retaining the echo of a basement, while the drums crash their way into oblivion, topped by a near constant barrage of cymbals. Being a duo, there’s little else here, but it’s a masterclass in how two men can making a pretty thrilling noise should the situation require them to do so. Half the vocals that are snarled and spat aren’t always clear but that only adds to the unavoidable DIY charm, especially by the time the chorus hits with a repeated singular word hook anchoring everything into the most basic. ‘The Land of Milk & Honey’ teases with more melody during an intro by way of a fuzzy garage rock guitar delivering a fairly tuneful riff. It’s not just a red herring, though, asthat riff returns to give a good sense of musical balance between verses. Those who like their hardcore of a purer style shouldn’t worry too much though, as everything else comes over like a super-charged and super-trashy juggernaut of trebly noise, topped by an equally demented selection of vocal growls and yelps. Best played loudly, this pair of numbers singles out The Wirms as a duo who very much evoke the pioneering sound of The Germs. The fact that their names also rhyme may, or may not, be coincidental.

‘Do The Squirm’ slows things to a heady garage rock pace, thus introducing a familiar riff, but loses none of the fire, fear or fury. The guitars are cranked to such a volume, you can really hear the buzz of the strings and amps, while the drums hold firm on a trashy groove that’s heavy on the snare. Occasional breaks in the main riff allow a very discordant lead guitar to fill space and a chorus – interested in little more than repeating the title until hoarse – pushes the limits of vocals to their extreme. At the peak of the chorus, the duo sounds as if they’re at breaking point. A song for “the little girl at the end of the road”, ‘Brenda Sue’ introduces an almost surf-punk mentality to The Wirms carefree world of crashing drums and distortion. It might seem to represent the duo bravely stretching out – and a really wobbly vocal makes this very much an acquired taste – but perversely, in terms of songcraft, there’s so much more at stake here. The retro melodies eventually outshine the wanton distortion and semi-sloppy performance, while the instrumental breaks push forth elements of great surf/retro punk pop. By the track’s end, this twisted and mangled take on something that sounds like the Beach Boys smashed into oblivion by Fear just had to work, even if it were through its sheer gutsiness as opposed to anything else.

This EP is short, loud, ugly and shamelessly chaotic. Short of a Chuck Dukowski bassline, it’s got all of the thrills you’d want from a very lo-fi hardcore release. It might be the kind of record that burns itself out quickly, but all the time it’s capable of whipping up an excited frenzy, it does so in such a careening and dangerous manner, it really deserves to be heard. …And with only 500 copies pressed in a physical format – that much coveted punk item, the coloured vinyl 7” – it’s very much a case of “early bird catches The Wirm”.