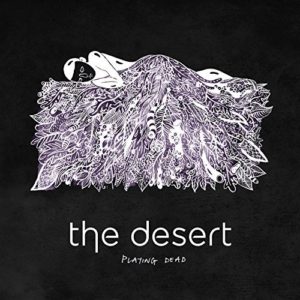 Bristol’s The Desert mix low key elements of alternative music, with elements of mellow acoustic pop, dream pop and even a few trip hop beats on their debut EP. Their music looks to the past, obviously, but somehow doesn’t sound like a complete nostalgia trip. In just four songs, they weave musical magic that sound absolutely superb approached on cold and dark winter nights.

Opening with the stand out track, ‘Half Hearted’ begins with a semi-distorted electric guitar juxtaposed with a gentle acoustic rhythm. The introduction of a vocal brings a distinctly Mazzy Star vibe, so things get off to a great start. Belatedly bringing in the rhythm section, the drums are soft and brushed at first, but eventually settle into a retro trip hop groove and a heavy bass punctuates everything. Despite so much musical greatness, it’s Gina Leonard who really impresses with a sultry, almost curling vocal that not only recalls the jazzier elements of Bristol’s trip hop scene of the 90s, but also echoes some of the quirks of Irish folk songstress Lisa Hannigan. Switching gears for something a bit folkier, ‘Just Get High’ sets up a pulsing drum beat, over which voice and guitar sound incredibly comfortable. Leonard excels without overplaying any of her performance and while there are little bits and pieces of Tricky, Moloko and others within the sound, The Desert always sound like more than the sum of their various influences. By the time the busier folk elements subside and a voice delivers the title by way of repetitive closing hook, there’s a feeling this has been rather special.

The darkest of the these numbers, ‘Playing Dead’ works a fiercely deep drone punctuated by programmed elements that sound if things have been directly inspired by Massive Attack’s masterpiece ‘Mezzanine’. Without losing too much of Gina’s accessible style, this track is much less about the dream pop and acoustics and more focused on loops, production and heady electronica. It’s still fantastic, mind, and even with less of a human backdrop, the vocals still shine, especially at the points where “woo-hoo”s jostle against the bass in a most haunting manner. Almost like a moodier Mazzy Star once more, ‘Soulmates’ offers up an almost jazzy acoustic guitar loop that’s multi-tracked and then split between the speakers, providing a melodic root that’s complex yet always happy to lurk in the background of the track. Atop the guitars’ precision, The Desert return to the deep electronica experimented with on ‘Playing Dead’, but use it to compliment and complete the musical picture and never dominate. In terms of blending alt-pop, electronica, folk and jazz, few have managed captured such a crossover sound so seamlessly. If by this point you find yourself drawn in by Leonard’s moody vocal style, you’ll love this.

This EP is drenched in 90s nostalgia, for the low key urban nature of trip hop and for the even lower key elements of dream pop and sadcore sounds and yet, perhaps due to a constantly warm production sound and aching vocals that just pull you in forever, it manages to still sound contemporary at the time of its release. It’s an ideal late night record; it’s a friend when you feel down; it’s melancholia celebrated. In short, it’s brilliant.