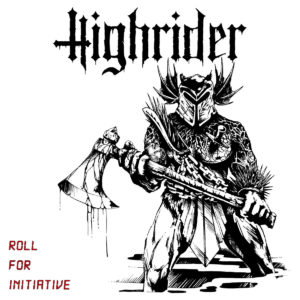 Looking at the two weaker tracks first, ‘Nihilist Lament’ begins a very heavy album with a set of size nine boots, with the band launching straight into a riff that’s equal parts Slayer and Hatebreed. The speed is that of 80s thrash classics aplenty, but the production job – a superb production job, it has to be said – gives the track a weight that the eighties just wouldn’t have allowed. Atop a relentless riff, almost all rhythmic assault at the expense of groove, the vocals are incredibly scratchy. The EP came with an intense vocal style for certain, but this takes things a step further still. It’s an acquired taste. Attempting to add melody – which in this case is a bit like attempting to swim the Atlantic in a blindfold whilst tied to bricks – Christopher hammers at the organ and on the occasions it cuts through the noise, it doesn’t so much sound odd, but almost a musical revelation. It’s that, of course, that continues to give Highrider’s work such a unique quality. A few spins of this track and the pieces fall into place, but it’s still not easily digestible. You can choose to say many things at this stage, but there’s no denying they’ve made an impression. Also, fairly scary, ‘Vagina Al Dente’ brings thrash speeds and melodic guitar grinding and places the intensities against a near-impenetrable vocal. Throwing an organ into the mix just makes this track sound like a brick wall of metal insanity for the first couple of minutes. Thankfully for the end section, they slow down by degrees, at first showing a penchant for some solid hard rock – again, played apace – before heading into stoner climes for the churning climax. Bits of this track are certainly more interesting than the bulk of ‘Nihilist Lament’, but it’s still doesn’t manage to capture the greatness of the EP. [As an aside, did they really mean “al dente” (a bit hard), or the more famous folk tale vagina dentata (with teeth) – an inspiration for HR Giger’s design for the Alien? Just a thought…]

With those tracks out of the way, the remainder is very good to excellent, with plenty of pointers back to previous works. Much better almost instantly, ‘Burial Scene’ opens with a terrific doom riff. New man Peter Jacobsson’s guitar is downtuned by about a mile, while the bass rumbles in an even deeper and oppressive manner. The ghosts of the finest sludge metal hover over Gothenberg casting their magic and this musical motif returns throughout a rather fabulously brutal six minutes. The verses, meanwhile, are on hand to deliver high octane hardcore metal and Andreas – handling all vocals and those basses simultaneously – sounds much better in his role, churning out each syllable with a fine blend between a metallic shout and the hardcore punk of his musical roots. This track may well be three different ideas glued together but it works and gives the best indication of the band’s intense talents. In many ways, it’s ‘Roll For Initiative’s highlight.

Following the drone of an organ, ‘The Greater Monkey’ returns to the core sound of the debut EP with the band going at full pelt while Christopher battles against the high speed romp with keyboard work pulled from the early 70s. In terms of the band’s dream of blending late 80s thrash with the heart of Rainbow and Deep Purple, they’ve rarely sounded as good. In some ways, yes, they’re covering old ground, but it represents a lot of what they do best. Another superb number, in places, ‘Roll Dee Twenty’ sounds like a hardcore crossover band wandering into chugging, groove metal territory, but this is a good thing…especially when they hit upon those slightly slower workouts. This allows a better insight into the way Peter’s hard and rhythmic approach firmly locks in with a powerful rhythm section, allowing Highrider to sound like a proverbial truck. Those looking for something a little more of the old fashioned variety should also get a lot of pleasure from the very thoughtful and melodic lead break, taking influence from various Euro bands of the 80s. Overall, it’s heavy and solid, but also familiar. While it’s not quite ‘A Burial Scene’, it’s a recommended listen.

In terms of production, ‘Batteries’ fares best. With an opening riff and vocal taken at Sick of It All pace and intensities, the weight of the recording makes this seem much more important than a hardcore assault. Andreas captures a superb bass riff and hammers at the four strings in a way you can almost imagine the studio shaking, at least until the band seemingly decides they can’t keep up such a ferocious pace. Midway through the track, they indulge in more of their classic rock influences and what was once hardcore punk now morphs into an instrumental break that is reminiscent of ‘Trilogy’ era Yngwie Malmsteen colliding with Royal Hunt. With a sharp return to the hardcore sound to finish, this is a very confident crossover. ‘Emotional Werewolf’, meanwhile, powers with a Euro riff driven by chugging guitar and keys – again harking back to the EP – and album closer ‘The Rope and The Blade’ changes things up for an unexpected finish of stabbing, staccato guitar lines and slabs of keyboards driving a slower number. During the slowest parts of this track, the listener gets a final listen to a superb bass sound and some great drumming, courtesy of Carl-Axel…and Carl’s precise approach to the kit is enough alone to lift this piece from being a stodgy but okay workout to something more interesting. Such a slow track seems an choice to finish; perhaps it just didn’t work when sequenced elsewhere, or maybe it’s a signifier to future musical experimentation – at the close of play, only the band will know for sure…

This record has huge balls and a terrific energy. The recordings are raw and yet sound polished at the same time, if that’s possible. It doesn’t have the immediacy of the debut, but that’s not to say it’s without some great moments, particularly in the lead guitar department. Buy it, crank it and immerse yourself in a world of massive riffs. Ultimately, if you’re looking for the thrashier end of classic metal, you’ll like it… The good outweighs the bad so, eventually, you’ll like it a lot. Just don’t expect to love it…at least not straight away.