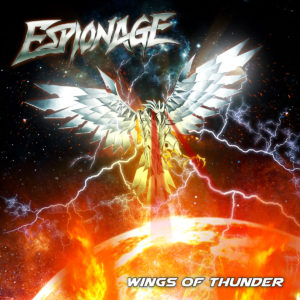 Melbourne’s Espionage don’t just fly the flag for old style heavy metal, they positively scream its praises from the Victoria rooftops with a shameless pride, not only as if the 90s never changed perspectives, but also as if Slayer had never actually existed. Hearing their second EP ‘Wings of Thunder’ for the first time, the traditional metal sounds are so rooted in the past, it’s even hard to tell whether it was recorded in 1984 (as is its core sound) or 2016 (as claimed in the sleeve notes). This, of course, isn’t necessarily a bad thing – especially considering that, even at such an early stage in their career, the Aussie rockers sound like masters of their craft.

Following a bombastic intro featuring thunder, lightning and the sound of a guitar revving like a motorbike, their love of the past is immediately evident, with the title track coming forth with the sounds of Judas Priest circa 1982. The riffs chug with an unmistakable sense of style, the drums are solid without resorting to any unnecessary thrashing and the vocals are superb. Frontman Andrew ‘Frosty’ Morris has a voice with a genuine presence. His tones have a loudness at mid range that exudes confidence. That would be enough to suggest he has a genuine command of his vocal chords, but when hitting a scream that’s akin to the younger Geoff Tate or Michael Kiske, it’s clear he was born to do this job. Factor in various twin lead guitars and a strong lead presence from Denis Sudzuka and it’s rare to find classic metal played this well by a band that aren’t the rejuvinated and Tate-less Queensryche. There’s a slight snag with the chorus gang vocals in that they shift just a little too far towards Manowar bombast and silliness, but even so it’s a great tune. ‘High Riser’ opens with a perfect twin lead riff that sounds as if it could have been culled from Iron Maiden’s ‘Piece of Mind’, before launching itself face first into a faster riff, powered by drum pedals and a speed driven melodic root. These two styles blend seamlessly throughout, with the return to those twin leads always seeming very welcome, while the lead solos (intercut with more Maiden-esque homage) are impeccably played. Over most of this, Morris puts in a terrific vocal performance and in terms of the old-school, it’s almost perfect. For the dissenting voices that still grumble “they don’t make ’em like they used to”, they clearly do…and judging by this, Espionage would be more than happy to shut you up.

Although musically spot on, with traces of Armoured Saint joining various riffs inspired by Trivium, ‘Running Out of Time’ doesn’t always fare quite so well. Once more, it’s hard to find fault with the riffs and the band are impressively tight throughout, always sounding like a classic metal band with ten years more experience. And once again, the solos are superb and the driving force behind the riffs conjures the same excitement as many an 80s metal classic; the melodic chorus is a winner. So what’s wrong? It’s got a fascination with almost pirate-shouty backing vocals, not to dissimilar from those heard on the title track, but there appears to be more of them…and it’s enough to do a little damage. Although it probably wasn’t Espionage’s intention, it makes it a bit harder to take the track seriously, although it might work better live, to be fair. ‘Never Surrender’ (not a cover of the old Saxon chestnut) kicks off with one of the best twin leads – again, owing a massive debt to Maiden’s ‘Piece of Mind’ – before dropping into a fast and riff heavy verse that sounds more like 80s Anthrax than anything else on the EP. and it is here that drummer James Shelverton really gets to show off his skills, giving the whole track a really taut sound. From a guitar playing perspective, it’s a genuine highlight too, with Sudzuka really showboating; his playing during the featured solo could have easily come from Yngwie Malmsteen’s ‘Trilogy’ long player. While not as concise as ‘High Riser’, the band have truly saved the best for last.

Flaunting influences from Maiden, Priest and even a smidgeon of ‘Spreading The Disease’ era Anthrax with a shameless pride and utter disregard for fashion, ‘Wings of Thunder’ is a very strong offering in the classic style. These guys clearly love what they do and if you like your metal very traditional, there’s every chance that you’ll love it too. Even with a few iffy chorus vocals, this EP is a genuine winner.