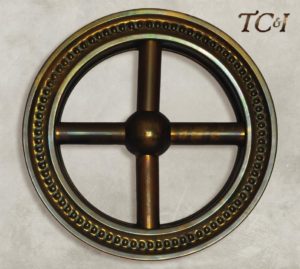 ‘Great Aspirations’ – credited to TC&I – had so much to live up to, as its self-depreciating title suggests. Since it marks the first time Moulding and Chambers have worked together since 1983, any new music at all seems reason enough for celebration, but is it any good? This EP is not really the essential listen it could have been, put it that way. However, provided you can hear the intentions beyond the recording’s obvious limitations, though, it gives an interesting insight into Moulding’s on/off journey as a great songwriter. It’s best not to expect the studio based perfection of ‘English Settlement’ or ‘Mummer’, as the four songs featured here are of a polished demo quality – hence the off-the-cuff nature they seemed to appear. That way, this first recording by TC&I fares better. Better, in this case, being merely okay rather than sounding like something from the pop music masterclass of the Partridge/Moulding universe.

The lead track, ‘Scatter Me’ is arguably the most XTC-like, a four minute voyage into shimmering pop with a simple but pleasing hook. Based around a solid bassline and jaunty piano, it’s got the bones of great power pop, music which Moulding seems clearly at ease, delivering a soft and naturalistic vocal. Whist buoyant pianos are often enough to ensure classic pop, this number goes a step farther, in that it’s the bridge sections which are the most impressive. Here the one-time XTC men really embrace their past, adopting a floatier and almost pychedelic sound and melody that could fit on pretty much any of the XTC albums from 1983 and beyond (ironically, most of the stuff after Terry’s departure). ‘Greatness (The Aspiration Song)’ is perhaps better, not least of all since Chambers is higher in the mix and now sounds like a man behind a real kit. The bones of the arrangement, once more, are happy to recycle pop with a marching beat, with traces of Moulding’s own ‘King For A Day’ and Jellyfish’s classic ‘Ghost At Number One’ being key inspirations. As if to counter Terry’s renewed confidence, Colin pushes his bass to the fore and places a warm melody against the mechanised beat. Above that, a lyric trails through various famous figures with the protagonist striving to make his own mark on a world with them and a very simple guitar catches the ear. Colin isn’t the most extravagant guitarist in the world, but, here he shows a knack for mood and texture, offering a soaring lead that occasionally sounds like the root melody from the end section of ‘Ripples’ by Genesis (albeit played in a home studio with no grandeur) and – as it transpires – it’s perfect for the song. This is the kind of track where the hook doesn’t necessarily stick, but the feel and melodies are of the mould that feel good. It’s a travesty that Terry’s drumming is so damn flat – exactly the same results could have been attained with a machine, but if you’re an old XTC fan looking to hear a demo of something that could have been essential in 1989, then this will certainly appeal. [That said, to hear the best XTC song that never was, take a listen to Nick Heyward’s ‘Love Is The Key From The Sea’ from his excellent 2017 long player ‘Woodland Echoes’. It’s terrific, as is the whole album].

Tackling something a touch rockier, ‘Kenny’ applies a solid beat and a chugging guitar in a throwback to XTC’s post-punk/new wave years. The bones of the number are reminiscent of moments from the peerless ‘Black Sea’ and should be the stand out track. Beyond musical bones, however, there’s a sense of this being an idea that feels incomplete. A stilted vocal makes a feature of Colin’s Swindon accent and his presence is undeniably off-kilter, as befitting the choppy riff but the chorus fails to capitalise on a melody that sheepishly pokes it’s head through the main riff. Understated saxophones add a nice touch, occasionally parping against the beat and Chambers’s stately sense of all things rhythmic is very cool, but it isn’t enough as Finally, ‘Comrades In Pop’ is just bewildering. A spoken word vocal recounts the pitfalls of being in a band and arguing over money, over rolling toms – excellently played by Chambers – and an odd keyboard sound that sounds like royalty free music from Teletext in 1985. As the track progresses, Moulding adds another guitar line akin to that from ‘Greatness’ and Chambers really goes for it in the rhythm stakes, but for the bulk of the track it’s difficult to know how this came about, or even why the musicians thought it would truly work. Even though history has consigned Colin the role of the pop craftsman who gave us all the far more accessible ‘Ball & Chain’, ‘Making Plans For Nigel’ and ‘My Bird Performs’, this shows that Partridge wasn’t the only experimentalist within the XTC ranks.

These songs – obviously – aren’t dictated by Andy Partridge’s own attention to detail, but none of them are as melodically perfect as Colin’s largely overlooked ‘Where Do The Ordinary People Go?’ either. TC&I sounds like two old friends feeling their way, especially as it’s presented in the manner of a “working demo” as opposed to something fully polished. It’s a sometimes interesting recording, but one that’s unlikely to appeal to anyone but the most hardcore XTC nut.

In 2017, Colin appeared as a guest on Billy Sherwood’s album ‘Citizen’.  Read a review here.