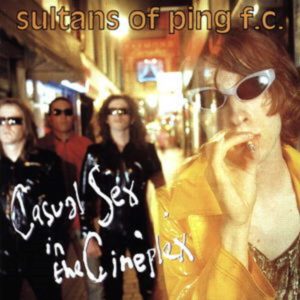 Somewhere among a whole world of great music appearing on a weekly basis, Ireland’s Sultans of Ping FC released a string of singles in ’92, followed by their debut album ‘Casual Sex In The Cineplex’. The Sultans were kings of their own self-made universe; a kooky world full of oddball characters and mundane situations. ‘Casual Sex’ would introduce listeners to an amateur footballer, a man struggling through life without various necessary appendages, someone so stupid it would beggar belief…and, perhaps most importantly of all, the story of a dispossessed pullover. If it all sounds completely irreverant, that’s because in somerespects, it is – but that didn’t stop the album becoming a perennial favourite of the NME reader, even if – rather bizarrely – none of the Sultans’ work made the music paper’s end of year charts.

To say ‘Casual Sex’ is a mixed bag would be an understatement. However, the Sultans’ trashy sound – best described as a warped mix of Buzzcocks, The Wedding Present and S*M*A*S*H as imagined through the eyes of Jilted John – brought with it a some genuine indie classics. In barely two and a quarter minutes, ‘Stupid Kid’ blends the speed of UK punk pop with a drum line which powers like the baggy scene put through a caffeine regime instead of other mood-enhancers. Morty McCarthy’s rhythmic assault is relentless almost throughout, save for a couple of stops, which frontman Niall O’Flaherty fills with snotty yelps and interjections. The high point of this faintly ridiculous tune comes from Flaherty himself, sniping at a pair of glasses which he feels the song’s protagonist looks even more stupid when wearing. Similarly, ‘You Talk Too Much’ is a superb showcase for the band’s Buzzcocks-ish style, as buzzsaw guitars and a shamelessly catchy chorus come together with glorious abandon. It’s more obvious here than ever that Pat O’Connell’s guitar work, while relatively simple, also comes with the kind of wrist-busting speed not encountered in this style since The Wedding Present’s ‘George Best’ LP some five years previously.

‘Kick Me With Your Leather Boots’ kicks the side of the cranium with more high octane indie punk fodder, but is ultimately kicked the curb by ‘Indeed You Are’, showing off Alan Feely’s solid bass style as he underpins an almost tribal drum part. ‘Indeed’ is an album highlight on all fronts, but most of the music’s intricacies are overshadowed by it’s lyric – a tale of student pregnancy, delivered with a shouty chorus that would become a live show highlight. Factor in a raucous slide guitar solo and it’s a mess…but it’s a glorious mess, all the same. Perhaps the only number in the Sultans’ early repertoire that’s better for drunken shouting, ‘Where’s Me Jumper?’ is a rough and ready garage rock/indie punk belter that relies on repetitious lyrics against a frenetic guitar to make a brilliant impact. As we join the protagonist’s dismay at losing his favourite new sweater, the Sultans’ penchant for fun moves from sublime to ridiculous as various locations are revisited within the mind, to no avail. …And as the vocal whines and spits that “...mother will be so, so angry…and my girlfriend will be so, so angry!”, it’s easy to see this as the ultimate Jilted John tribute. ‘Give Him A Ball & A Yard of Grass’ revisits the sounds of ‘Stupid Kid’ and ‘You Talk Too Much’ without adding anything new, but being the archetype of a track that works much better live, it still captures The Sultans’ in essential and breakneck style, ensuring ‘Casual Sex’ will always be weighted towards good material.

‘Veronica’, meanwhile, presents a sunny demeanour, mixing indie sounds with a twee pop flourish. On it’s own merits, it should be a firm favourite, but it doesn’t capture the distinctive quirkiness of some of the other material. This is an album highlight in many ways, but has the misfortune of battling some genuine giants for attention, and obviously, it’s harder to be noticed when there’s a missing woolly to contend with. Had this ode to a fabulous girl appeared on a b-side, or indeed, a different release, it would almost certainly shine even brighter than it does, especially with an old-school harmonica adding to the hook. As it is, and as part of this twelve song collection, it’s lovely, but it could also easily be the work of several indie janglers of the era: in fact, it’s rather more Frank & Walters than prime Sultans.

Of the mid-range offerings, ‘2 Pints of Rasa’ bristles along with a cocky arrogance, with a tune that borrows verses from The Wedding Present and a slightly drippy chorus that heightens the ever-mounting geeky tension. In a change of mood, ‘Let’s Go Shopping’ comes across like a cross of jangle pop and easy listening 70s fodder, taking the mood of ‘Veronica’ to it’s logical extreme, but what transpires is a tune that best demonstrates the Sultans’ interests in all things kitsch. The arrangement lollops and bounces as if aware of the carefree day that’s about to be spent perusing the isles of a discount supermarket for “crisps and jam” whist wrangling a wayward trolley and pram. Flaherty is more than aware of the fun nature of the track and drops his voice into a weird crooning style to suit. It’s one of those tunes that if approached in the wrong mood could probably annoy, but it always feels like an integral part of the album all the same, even with it’s firmly second division status. ‘Cletus Clarke’ is just plain odd; never objectionable, just odd. Cletus has no arms, legs or a head; you have to wonder what it is he’s doing and why we have to “cheer on” this seemingly supersonic hero torso. Looking beyond the lyric, the broader arrangement gives Alan another opportunity to weave a more complex bassline, while Pat throws out swathes of fuzzy guitar as if it’ll be unfashionable come January ’94 and Niall spits each line – odd as it may be – with such arrogance and confidence you’d think he was covering ‘Freebird’. In all, there’s a lot here that should make it top tier Sultans…but it still comes up just a little short. Perhaps it’s just a case of trying too hard.

As with most albums of this style, there are a couple of duds (‘Karaoke Queen’ has a great bassline but very little else; ‘Back In a Tracksuit’ is sluggish indie that really doesn’t give an indication of how good ‘Casual Sex’ can be when firing on all cylinders), but given the enthusiasm and pace the album shows pretty much throughout, that isn’t enough to spoil anything overall. Decades on, it’s hard to say whether ‘Cineplex’ is a genuine genre classic or utterly disposable (perhaps it dares to be both, if that’s possible) but, whatever, most of the tunes – good, bad or indifferent – are really distinctive and have retained so much of their original spark. It’s also easy to argue that the album is totally steeped in nostalgia for those who purchased the record at the time of release. The impact of the record upon original release was big enough for The Sultans to share stages with a few of the greats, including a particularly memorable gig with Carter in Tonbridge (with Niall in a foul mood for some reason) and various festival appearances. Of course, the first two singles released to promote their second album would ultimately put most of this debut in the shade, but that’s a whole other story…

2 thoughts on “SULTANS OF PING F.C. – Casual Sex In The Cineplex”