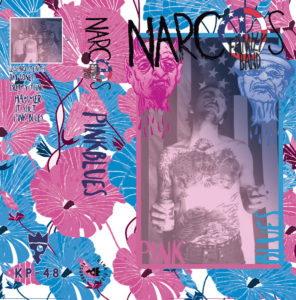 The way guitarist Unc howls with a heavy blues riff at the outset of ‘Leopard Stealth (I’m Gone)’, you could be forgiven for thinking we’re headed straight for Sabbathy stoner rock town, though…but it’s merely a vehicle to crank some tension before the rest of the band kicks in. With a tearing aggression combined with some severe retro chops, the chaos that ensues is as if experiencing a jam between Narcos label mates The Mad Doctors and St. James & The Apostles. Furious garage rock is very much in order and while the recording is raw, the band sound as if they’ve perfected such a musical delirium. Top that hard driving riff with a vocal that sounds like Zodiac Mindwarp in one hell of a temper, and this two minute opener is a speaker-bustin’, gut-wrenching, rough and tumble affair that you’ll either love or hate. Switching gears for something slower, ‘Pretty Thing’ begins with a hefty bassline, as the defiantly named Human Army cranks his four strings with intent. The guitars then join with a weighty riff before everyone finally settles into a seventies inspired proto-metallic workout that melds the loudest parts of Blue Oyster Cult with the most heavy and obtuse elements of Hawkwind. As before, vocalist Hot Meat grumbles and growls his way through each line, as if he’s been challenged up the ante in terms of intensity and shouting, howling and belting out various inaudible lyrics as he goes, it’s a job he’s taking very seriously. Okay, with the addition of old fashioned guitar breaks played with sheer gusto, this would already be an aural assault, but Narcos aren’t satisfied with that – they’re ready to take everything to extremes and their already challenging noisefest is then augmented by old school organ and…saxophone. The use of sax really reinforces the idea that these guys are playing things much closer to deeply intense psych-rock than metal, albeit re-writing the book as they go. It might be a step too far – sometimes sounding like field recordings of a wounded goose – but somehow it seems to make sense.

Assuming you haven’t switched off and ran for the hills by this point, ‘Hammer It Shut’ presents the EPs best riff – a solid fusion of hard rock, blues and garage noise through a metal filter – which the band then use for a base for more confronting ugliness. Meat growls like he’s wandered in from another band and fancies a jam; the saxophones break out into jazz-based soloing (without the confidence to really cut loose; however, it’s still an interesting addition to heavy garage sounds) and the rhythm section remains both loud and resolutely tough. Let’s face it: without them, this loose collection of grooves would be sheer chaos that only Mike Patton and the Melvins’ Buzz would deem a good idea… Finally, the title track features some superb bass playing from the outset, augmented by a great, fuzzy sound. For the next five minutes, Narcos embark on their most accessible tune: a loud, swaggering bluesy rocker that takes in the sheer abandon of the MC5 and then applies that to the heavy bluesy sounds of late 60s proto-metal. An intensive dual guitar sound makes things all the more impressive; it’s loud enough to make the keyboard drones all but inaudible, before everyone slows down for a moody stomp. The vocals – taking on the same challenging mantle as before – are the weak link, but the way this all fits together, it somehow still manages to garner amusement. Interestingly, this is one of the songs where brass might’ve been the most welcome…and yet the saxophonist, a Mr. Chocolate Shake, appears to be on a tea break.

This is ridiculously intense. Sometimes, it’s the sound of a band in a room feeling their way towards a groove that’ll eventually hurt your skull. Sometimes it’s just utter chaos. So, how is it, that this clattering, confrontational noise fest even manages to be entertaining? It’s a mystery, and no mistake. The Narcos Family Band’s third release proves that with some reasonable talents, a lot of enthusiasm and a set of massive brass balls…sometimes, just sometimes, you can make the most obtuse things work. Just ask anyone Mike Patton has ever signed to his record label. These guys would be right at home there…